81 high risk accident sites in the streets of Sherbrooke 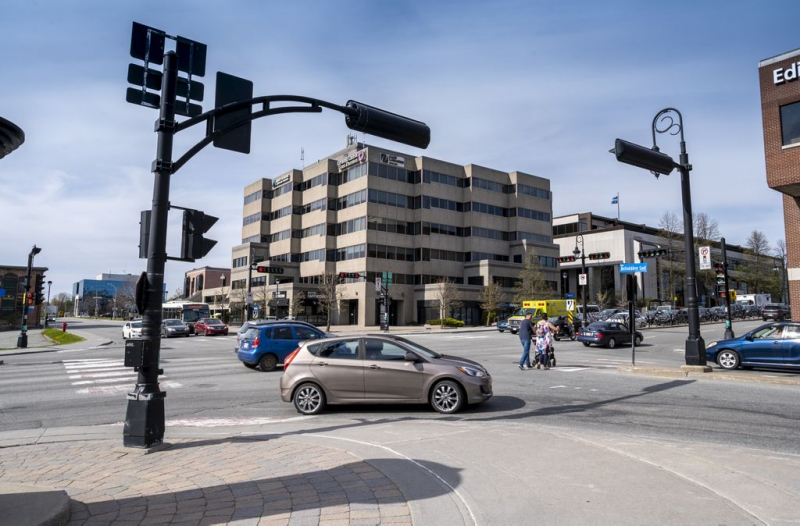 The intersection of King Ouest and Belvédère streets is a priority for road safety interventions.

Jonathan Custeau La Tribune SHERBROOKE – An analysis of road accidents that occurred on the territory of the City of Sherbrooke between 2012 and 2016 made it possible to target 81 sites at high risk of accidents. If 28 of them have already undergone interventions, it will probably be necessary to set aside more than $ 5 million to correct the dangerous situations for 35 sites deemed to be priorities.

This analysis was carried out as part of the Municipal Road Safety Intervention Plan (PISRMM), a plan that covers streets under municipal jurisdiction. In other words, the provincial roads were not included. The aim is to reduce the number of accidents. The City received a budget of $ 125,000 from the Ministère des Transports for its work. The content of the report was accepted by the MTQ in June, so that the City will be able to apply for subsidies for its road interventions in 2021-2022, subsidies that could reach 75% of the planned budget. The 2020-2021 envelope is already exhausted.

For the targeted period, 9,090 accidents were listed in Sherbrooke, including 8,400 that could be located with precision.

Among the 35 sites * that were the subject of an in-depth analysis and an action plan drawn up, 30 were selected by the City and 5 by the partners. If we estimate the cost of the work for the entire plan at $ 5.5 million, we add that the accuracy of this estimate is 50%.

Mr. Dubuc explains that the in-depth analyzes made it possible to obtain very useful details on the interventions suggested. For example, at the corner of Jacques-Cartier Boulevard and Beloeil Street, 39 accidents were recorded, the majority of them occurring in February. The accident rate is five times higher than the rate considered critical.

“The recommendations may be to prohibit the left turn or to close the median there. We could also put up fences because pedestrians do not cross at the intersection. “

Ditto in the section of King Street West located between Argyll and Metcalfe streets where the possibility of adding a median or a left turn lane could be explored. “There is also a bit of speed in this area, so we suggest maintaining police surveillance, adding an educational radar and even adding a central fence to prevent pedestrians from crossing in the wrong place,” says Mr. Dubuc.

To date, of the 81 sites identified as posing the greatest risks, 16 still require study.

However, carrying out these studies does not constitute an obligation for the City to carry out interventions on the sites concerned.

Several elected officials expressed their fears in front of some of the proposals. Chantal L'Esperance, for example, is worried about the possibility of adding medians. She recalls the outcry caused by a similar idea on Galt Street West, near the Sherbrooke Center. “I want us to work upstream to meet all of our needs and those of traders. Wanting to make the solution concrete can create a problem elsewhere. “

Marc Denault, for his part, wants more pedestrians to be made safer at the intersection of rue Wigget and boulevard Jacques-Cartier. He also noted that U-turns should not be allowed in several places and wanted a completely protected crossing at the corner of King West and Carillon streets for pedestrian safety.

Julien Lachance would also like us to take an interest in the traffic lanes belonging to the MTQ, in particular the Chemin de Saint-Élie, in his district.

Paul Gingues is disappointed to see that no grant is available for 2020-2021. Rémi Demers also asks if the City took it too late to ask for financial assistance.

Sébastien Dubuc replied that the City had to first obtain the approval of the MTQ, which was done in June, of the public security committee, which was done in August, and of the municipal council before proceeding. “The grant envelope was closed in August for 2020-2021. “

* Priority sites chosen by the City

Teilor Stone has been a reporter on the news desk since 2013. Before that she wrote about young adolescence and family dynamics for Styles and was the legal affairs correspondent for the Metro desk. Before joining The Bobr Times, Teilor Stone worked as a staff writer at the Village Voice and a freelancer for Newsday, The Wall Street Journal, GQ and Mirabella. To get in touch, contact me through my teilor@nizhtimes.com 1-800-268-7116
Previous ArticleSherbrooke will not set the table this year
Next ArticleBeaudin's resolution on transparency was defeated