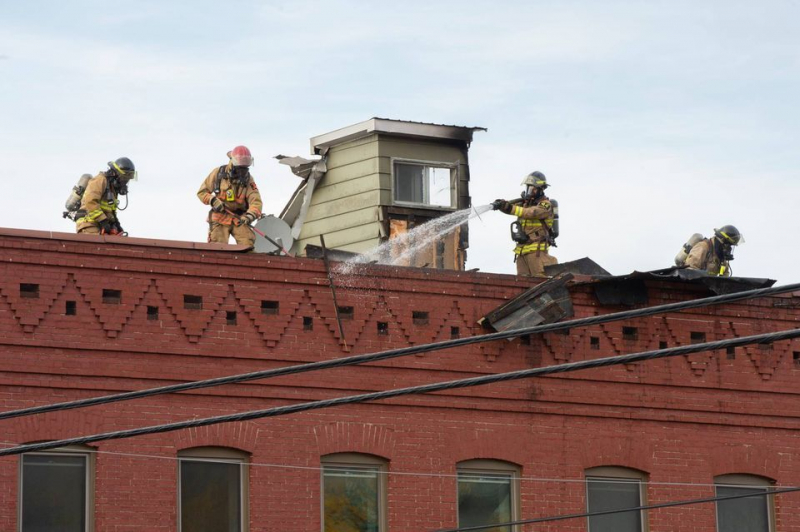 A major fire, at the corner of Dufferin and Frontenac streets in downtown Sherbrooke, was brought under control Sunday afternoon.

René-Charles Quirion La Tribune It is a cigarette butt placed in a bin on the roof on the century-old building which is probably at the origin of the fire which damaged it, late Sunday afternoon , in downtown Sherbrooke.

The investigation by the Sherbrooke Fire Protection Service (SPCIS) established the course of the day's events and determined the cause of this accidental fire at the building on Frontenac Street.

“A smoker's item was left in a flowerpot. Since the item in question was badly extinguished, it was undoubtedly revived by the winds. The fire then spread to the roof, ”explains SPCIS operations chief Claude Langlois.

According to initial estimates from firefighters, the amount of damage amounts to more than $ 125,000.

SPICS was quickly dispatched to the scene around 4:20 p.m. to extinguish the flames and limit the damage. The flames were contained on the roof of the building.

Businesses, including the Bistro Kàapeh Espresso café, and housing under renovation were affected mainly by water and smoke.

About fifteen tenants of the neighboring housing of the heritage building located next to Sherbrooke city hall had been evacuated.

Chief Langlois explains that this type of fire where cigarette butts are left in flower pots or mulch is relatively common.

“We have to intervene regularly on this type of fire. Pedestrians often leave their cigarette ends in the city's flower beds and we have to intervene. It also often happens at residences, ”explains chef Claude Langlois.

Fire in downtown Sherbrooke: the flames under control

Last week, on the night of September 19 to 20, a fire of this type broke out in the east of Sherbrooke.

A cigarette butt dropped in a recycling bin is the cause of the fire on 9th Avenue in Sherbrooke.

The firefighters had to use the portable ladders to rescue the tenants who had taken refuge on the balconies at the front of the building.

This fire had barely been brought under control when the firefighters had to come out during the night.

SPICS had to intervene to put out a burning chair at the Albert Hotel located at the intersection of King Street East and Bowen Street South.

Firefighters also responded to fires on Sant-Raymond Street as well as on Belvédère Street.

“On Belvédère Street, the occupants had brought the fire under control. We do not report major damage, ”explains Claude Langlois of SPICS.

Teilor Stone has been a reporter on the news desk since 2013. Before that she wrote about young adolescence and family dynamics for Styles and was the legal affairs correspondent for the Metro desk. Before joining The Bobr Times, Teilor Stone worked as a staff writer at the Village Voice and a freelancer for Newsday, The Wall Street Journal, GQ and Mirabella. To get in touch, contact me through my teilor@nizhtimes.com 1-800-268-7116
Previous ArticleA former Rouge & Or player will be able to solve his problems in therapy
Next ArticleNacime Kouddar wants to drive his vehicle for work