A new commercial and industrial center in St-Élie 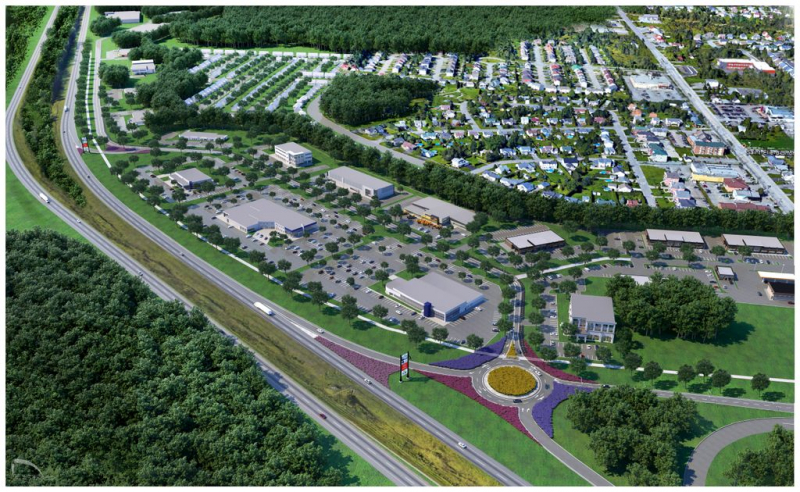 Groupe Laroche unveiled a first model of its project along Highway 10-55 at the entrance to Saint-Élie.

Jonathan Custeau La Tribune A commercial and industrial center along the highway could be created near exit 137 of highway 10-55, the one giving access to highway 220 in the Saint-Élie sector. The Laroche Group, owner of residential land, argues among other things the proximity to the highway to ask the City to amend its development plan and the zoning of the land to allow it to carry out its project.

To allow the construction of this new industrial and commercial pole with a length of approximately one kilometer, an agreement will be necessary with the Quebec Ministry of Transport to redevelop the exit of the highway, build a roundabout, and allow the access to the land adjacent to the Pôle de quartier Saint-Élie, which already has eight commercial premises.

The land in question has an area of 27 hectares and would allow the development of 68,841 m2 of commercial buildings. The project has been in development for about ten years with a construction target for 2018 or 2019. If all stages are proceeding normally, it is not possible to start construction before the end of 2021 or the beginning of 2022 A model submitted to the municipal council presents the scope of the project, but the layout of the buildings and their architecture will have to be approved in subsequent stages.

Groupe Laroche argues that the noise generated by the highway is present over a distance of 280 meters on each side of the traffic lane and that residential, institutional and recreational uses are prohibited there to ensure the quality of life of residents. To develop a residential project, a sound barrier valued between $ 3 and $ 5 million would have been necessary, according to the promoter.

“It would be inappropriate and inappropriate to develop other than [than a motorway business park] these sectors offering the potential of great value and thus lose these opportunities for added value and exposure for companies and for cities”, argued the promoter in a letter sent to the City in 2018.

He cites the Carrier Harley Davidson-Performance NC company, installed in July 2017 along Highway 10, in the Deauville sector, as a company that had indicated its interest in the Saint-Élie site.

Municipal documents made public Monday therefore indicate that it is “logical” to allow industrial and commercial development in this location. According to an opinion from Commerce Sherbrooke, the zoning changes will make it possible to concentrate heavy commercial uses along the highway, which is more suited to these activities. In the same vein, the para-municipal organization believes that we could thus free up land in the industrial park that is less suitable for heavy commercial use.

Commerce Sherbrooke's notice states that it is desirable to limit industries and businesses in this zone to less than 5,000 m2 and to limit themselves to the themes of motor vehicles and recreational vehicles, heavy vehicles, recreational vehicles and agricultural machinery, wholesalers , warehouses and distribution center with sales and showroom, as well as light industries with retail or showroom.

An information session and a consultation

The president of the urban planning advisory committee, Vincent Boutin, reports that there are still several stages to go through to achieve this project. “The first step is to put the ball in play to see if it is possible to change the layout plan. Then we will proceed with the zoning if necessary. The promoter will organize an information session in the coming weeks to present his project and to see how he could improve it. Then, there will be the official consultations of the City concerning the development plan. “

According to him, the government process will take between eight months and a year. “We already have an idea of the issues that could be raised in public consultation and we are working with the developer to make improvements. “

“We don't have too much industrial land and the City is developing rapidly. “- Julien Lachance

Julien Lachance, councilor for the Saint-Élie district, expresses that the needs for highway showcases are real not only for the neighborhood, but for the city as a whole. “We don't have too much industrial land and the City is developing rapidly. For citizens, what is important to remember is that there is no vehicular route between the project and the residential streets. A buffer zone is planned. “

Éric Laroche, vice-president of Groupe Laroche, hopes to hold his information session no later than January. “We will be able to reassure people and present them the mitigation measures that are planned. Once the first stages of consultation are complete and we have a solid foundation, we will be able to negotiate letters of interest with companies. “

The type of affection sought by the Laroche Group is already present in three places in the territory of the City of Sherbrooke, along Highway 55 in the Brompton sector, along Boulevard Bourque in the Deauville sector and north-west of the Brompton urbanization perimeter. There are still a few plots of land along Boulevard Bourque, but their attractiveness is low according to City documents.

The Laroche Group hired biologists to assess the ecological value of the land in question. “We found wetlands that are mostly of low ecological value. Only one environment has a high value, namely the Dorman stream. It will be fully protected. “

It should also be noted that the upgrading of the Saint-Élie treatment plant, planned for 2021, will be necessary to ensure the construction of the project.

The promoter estimates the projected private investment, including that of the partners, at around $ 90 million, in addition to allowing the creation of 1,000 direct and indirect jobs.

Teilor Stone has been a reporter on the news desk since 2013. Before that she wrote about young adolescence and family dynamics for Styles and was the legal affairs correspondent for the Metro desk. Before joining The Bobr Times, Teilor Stone worked as a staff writer at the Village Voice and a freelancer for Newsday, The Wall Street Journal, GQ and Mirabella. To get in touch, contact me through my teilor@nizhtimes.com 1-800-268-7116
Previous ArticleStéphane Blanchard trial: accused ill, hearings adjourned
Next ArticleCégep students called individually