Accommodation on the grounds of the former Le Magog bar 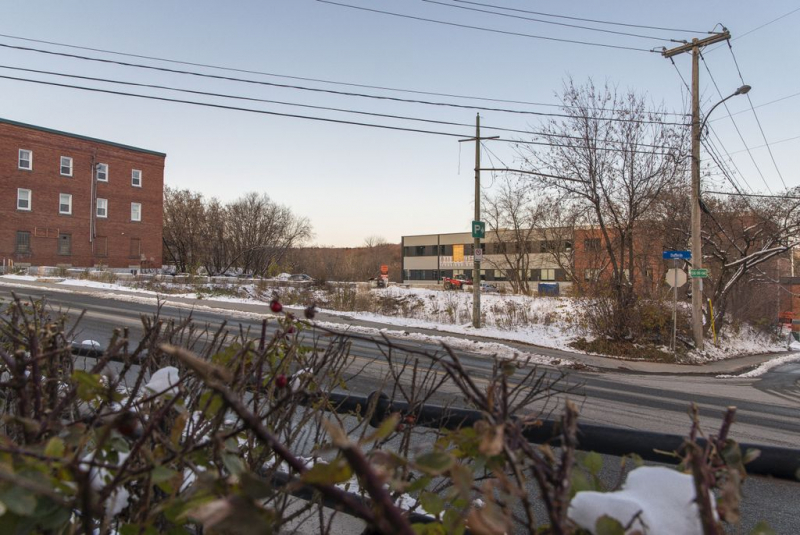 The land left vacant by the burned-out building of the former Le Magog bar, on Dufferin Street, could soon be occupied by a building with 70 apartments.

Jonathan Custeau La Tribune A housing and commercial building project could see the light of day on the site of the former bar Le Magog, at 256 rue Dufferin. A request for a zoning change to allow the construction of 70 housing units was submitted to the city council, three years after the fire that had completely destroyed a heritage building in the city center.

Only 45 parking spaces are planned in an underground parking lot in the future building, which has raised questions from elected officials.

The current request is for a building with six floors of living space offering shops on the ground floor and 70 apartments on the upper floors. An interior courtyard is planned in the center and will be accessible from rue des Abénaquis. It could also be accessed by a porte-cochère by rue Dufferin. Including access to indoor parking, the back of the building would have seven floors.

At the moment, the zone only allows buildings with a maximum of 18 units and four floors. There would also be only four floors in front of Dufferin Street to allow integration into the built environment. The zoning by-law cannot force the installation of businesses on the ground floor. If commercial demand were lacking, it would be possible to build apartments there.

Because the property is located in a class 4 heritage area, the building will be subject to a site planning and architectural integration plan, which is why no model has yet been presented. The architecture of the building and its location on the ground must be reviewed by the Borough of Nations advisory planning committee.

Councilor Paul Gingues was the first to worry about the number of parking spaces integrated into the project, pointing out that the standard is set at 1.5 spaces per unit.

The president of the town planning advisory committee, Vincent Boutin, specifies that the minimum number of boxes does not apply to the city center. “In this area, there is no minimum imposed because we want people to use the parking lots already there. In our reflections, we would rather impose a maximum number of boxes to restrict our vehicle fleet. “

However, the project is located very close to a hotel project on Frontenac Street which had been aborted, according to the promoter, due to lack of parking nearby. “In a city center, it is common that there are not as many parking spaces as in the suburbs. It goes in the direction of densification. If we want to reduce our dependence on cars, we have to start somewhere, especially when we are trying to create a dynamic, active and lively environment. “

Mr. Boutin believes that this new project will consolidate a sector that is being redefined, in particular with the relocation of the Grandes-Fourches bridge, and that architectural coherence must be respected to fill a hole in the historic fabric.

Évelyne Beaudin considers this to be good news for the downtown area. However, she adds her concern to see “too few projects offering affordable housing”.

Teilor Stone has been a reporter on the news desk since 2013. Before that she wrote about young adolescence and family dynamics for Styles and was the legal affairs correspondent for the Metro desk. Before joining The Bobr Times, Teilor Stone worked as a staff writer at the Village Voice and a freelancer for Newsday, The Wall Street Journal, GQ and Mirabella. To get in touch, contact me through my teilor@nizhtimes.com 1-800-268-7116
Previous ArticleDeath of Héliodore Dulac: “a rather particular scene” [PHOTOS]
Next ArticleMajor perfume theft at Galeries Orford