Alexis Vaillancourt, not just the son “of” 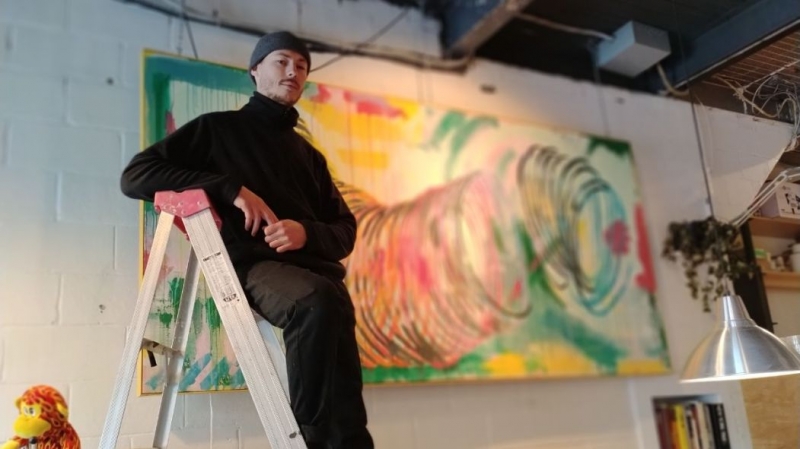 Alexis Vaillancourt in his workshop in Rosemont

Multidisciplinary artist Alexis Vaillancourt is a jack of all trades. Sculpture, painting, cabinet making and installation are some of the techniques used by the resident of Rosemont. If his surname sounds familiar, it is because he is the son of the illustrious Armand Vaillancourt. Alexis, however, wants to make a name for himself and not only benefit from his father's reputation. However, the father and son present a joint exhibition out of the ordinary.

Armand and Alexis Vaillancourt are currently presenting the exhibition Deux cœurs Deux tête & # 8211; between dream and reality at the Diane-Dufresne Art Center in Repentigny. Armand, for his part, will present a series of works that have been rarely exhibited in the past. Alexis will exhibit gigantic sculptures made of unconventional materials such as concrete, reflective surfaces and recycled materials such as plastic.

The planning of Two hearts Two heads & # 8211; between dream and reality It was not easy, however. Armand fell ill over the summer and had to be hospitalized for almost two months. He was therefore not able to participate in the implementation of the exhibition as much as he would have liked or produce a work specifically for it. The selection of works as well as the scenography of the exhibition were therefore mainly carried out by Alexis and her mother.

“What was a big challenge was to make a selection from among Armand's works, because he relies on an extremely large range,” Alexis explains. To create the bridge with me, we chose more current works, dating from recent years. There are many monumental works, installations, large formats. It creates a fairly immersive journey. “

To pay tribute to her father's work, Alexis nevertheless chose to make a straight sculpture inspired by this one. He thus reproduced a mountain of white materials, a nod to the clusters of styrofoam , a material that can be found in abundance in the workshops of Armand, and which is often used by the artist. -Here.

While his father’s legacy is undeniable, Alexis Vaillancourt is not keen on showing it at all costs. “I'm not shouting from the rooftops that I'm 'the son of', although I think with the show it's obvious to everyone,” he explains. I think as long as I stick to what I'm doing and don't try to copy what my dad does, I'm fine. Certainly there are similarities, as I grew up with him and in his workshops, you can make connections. But I live well enough with it and I don't put pressure on myself. ”

Alexis has indeed been immersed in art since he was very young. During his childhood he often visited his father's exhibitions and always had a pencil in his hand. “It started naturally. I have always loved drawing, all my childhood and during my teenage years I drew all the time, ”he says. When the time came to enter CEGEP, he naturally opted for the visual arts.

The click for an artistic vocation however occurred when he was introduced to graffiti and murals. “I don't really do anymore now, but that's what gave me the urge and the urge to paint all the time,” he says.

An honor for Repentigny

The exhibition Two hearts Two heads & # 8211; between dream and reality is presented at the Diane-Dufresne Center in Repentigny until January 9. The price to attend is $ 5 for residents of Repentigny and $ 8 for non-residents. The event is free for those 18 and under.

“It is an honor for the City of Repentigny to welcome to the Diane-Dufresne Art Center the immense artist Armand Vaillancourt and to exhibit his works alongside those of Alexis Vaillancourt, an emerging artist who is already well established and of undeniable talent, ”said the mayoress of Repentigny, Chantal Deschamps, about the exhibition.

Teilor Stone has been a reporter on the news desk since 2013. Before that she wrote about young adolescence and family dynamics for Styles and was the legal affairs correspondent for the Metro desk. Before joining The Bobr Times, Teilor Stone worked as a staff writer at the Village Voice and a freelancer for Newsday, The Wall Street Journal, GQ and Mirabella. To get in touch, contact me through my teilor@nizhtimes.com 1-800-268-7116
Previous Article“Shifting” by Beatrice Deer, an album to listen to here and now
Next ArticleArnaud Soly in balance between the cellar and the reflective