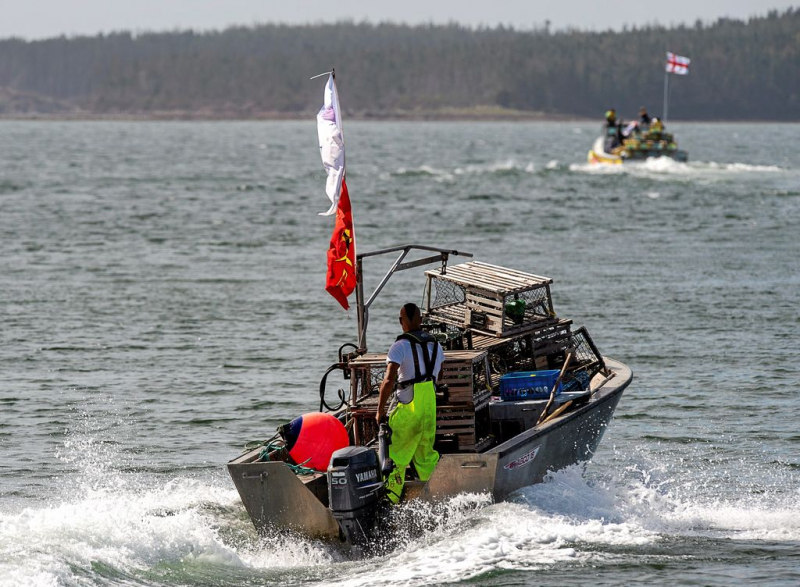 Wilbert Marshall, the chief of the Potlotek First Nation, says seven boats are already participating in the lobster fishery three days after launch. According to him, they bring in several hundred pounds of lobster daily, even though we are outside the season authorized by the federal government.

Wilbert Marshall, the chief of the Potlotek First Nation, says seven boats are already participating in the lobster fishery three days after launch. According to him, they bring in several hundred pounds of lobster daily, even though we are outside the season authorized by the federal government.

“It created a lot of excitement here. It's good to see that they want to fish and earn money, ”says the chef.

Potlotek is a First Nation, located approximately 70 km northeast of Sydney, Nova Scotia. The community has about 700 inhabitants. She is having housing problems.

Mr. Marshall says the youth of Potlotek are eager to earn enough to buy their home rather than waiting for community help.

“They don't want to rely on us. We are there to help them and give them a way to do it, ”he emphasizes.

In this judgment, the highest court in the country ruled in favor of Donald Marshall who said that the treaties allowed him to fish eels where and when he wanted.

The judges also found that Mi'kmaq, Maliseet and Passamaquoddy communities in eastern Canada could hunt, fish and congregate to earn “a decent livelihood” – to procure “necessary goods”.

The court clarified its ruling two months later, however, by stating that the treaty right was still subject to federal regulation.

Non-Indigenous fishermen argue that this clarification is essential to understanding their opposition to a self-regulated Indigenous lobster fishery, which is not federally regulated.

The Richmond County Coastal Fishermen's Association, the largest group of non-native fishermen in the St. Peter's Bay region, sent an email to notify them of their refusal to fish in Potlotek.

However, Mr. Marshall says that there have been no conflicts on the water between the fishermen, unlike the tensions that arose in Sainte-Marie Bay where non-native fishermen removed the lobster traps of their native counterparts. .

“So far they [non-native fishermen] talk to the government. They said they would leave us alone. So far, it's calm here, ”he testifies.

A spokeswoman for the Federal Fisheries Department confirmed that the Potlotek fishery will be the subject of ongoing discussions between government officials and Mr. Marshall.

Federal Fisheries Minister Bernadette Jordan has previously said she wants to “work with First Nations leaders on the path to implementing their treaty rights.”

Teilor Stone has been a reporter on the news desk since 2013. Before that she wrote about young adolescence and family dynamics for Styles and was the legal affairs correspondent for the Metro desk. Before joining The Bobr Times, Teilor Stone worked as a staff writer at the Village Voice and a freelancer for Newsday, The Wall Street Journal, GQ and Mirabella. To get in touch, contact me through my teilor@nizhtimes.com 1-800-268-7116
Previous ArticleThe pinnacle of cooperative success
Next ArticleNew York palaces mourn the jet-set