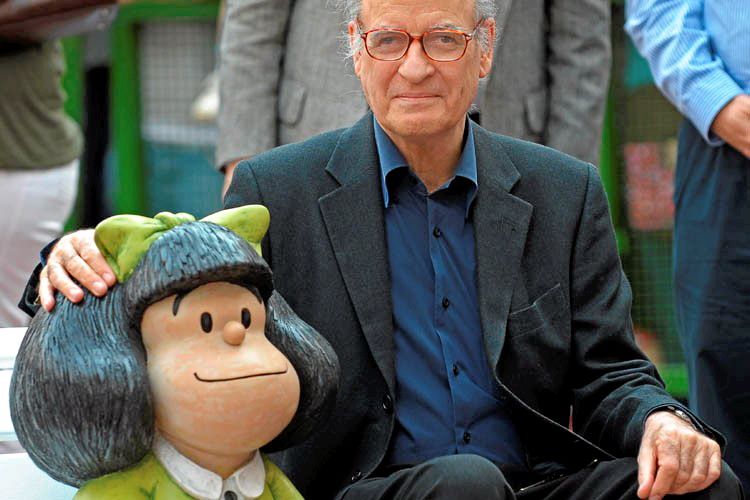 Share September 30, 2020 Updated October 1, 2020 at 12:19 am Share Death of Argentinian cartoonist Quino, creator of Mafalda Agence France-Presse BUENOS AIRES – Quino, father of Mafalda, this mischievous little girl with a big black hair who hates soup , injustice and war, who died at the age of 88, combined a keen sense of the absurd and the political finesse of the great contemporary cartoonists.

“I draw because I express myself badly,” confided the Argentinian whose real name is Joaquin Salvador Lavado, author for the most part of short comics and almost silent cartoons.

This son of Andalusians, born at the foot of the Andes in the region of Mendoza in Argentina, on July 17, 1932, very young discovered the power of the pencil.

“When I was three, I was drawing with my uncle. I understood then that from such a simple object could be born people, horses, trains, mountains … A pencil is a marvelous thing ”, he liked to tell.

At 13, he enrolled in the School of Fine Arts in Mendoza, but in 1949, “tired of drawing amphorae and plasters”, he stopped his studies and only thought of one thing: to become an illustrator. of humor. He then launches into silent comics.

At 18, he went to the capital Buenos Aires, but came back empty-handed. He then experienced three years of famine until “the happiest day of life”, in 1954, when the Argentinian weekly Esto Es published its first page.

“I drew very badly. The designer Garaycochea said to me: “you have good ideas but you draw like a pig”. ” Then it is the designer Divito who corrects it. “Before, I drew without shadows, everything in a clear line. Divito said that you shouldn't leave as much blank as readers wanted for their money. Then he asked me to bring him pictures with text. ”

In 1963, his first book Mundo Quino (the world of Quino), appeared. The same year, he worked for an advertising campaign which sought a character “between Blondie and Peanuts” for a household appliance of the Mansfield brand. This is where Mafalda was born, but the campaign never saw the light of day.

It was not until September 29, 1964, at the instigation of his wife Alicia Colombo, that the little girl came out of a drawer to be published by the weekly Primera Plana in Buenos Aires. “My wife was the key element in the recognition of Mafalda,” he assured in 2014 when the Princes of Asturias Prize was awarded.

Very quickly, its popularity exceeded the borders of Argentina then Latin America and reached Europe.

When it was released in Spain, then under Franco, Mafalda was reserved for adults. It is censored in Bolivia, Chile and Brazil. After the 1976 coup in Argentina, Quino went into exile in Italy, then in Spain.

From mediocre to universal stupidity

The disrespectful Mafalda, two points for the eyes, a small ball for a nose and always a knot in her thick black hair, is the daughter of a housewife and an Argentinian insurance agent totally overwhelmed by her maturity.

Her requests for an explanation on the condition of women, dictatorship, overpopulation, the atomic war or even Fidel Castro are in reality the expression of a constant indignation against the world of the 1960s.

Among her friends, the capitalist Manolito, the anarchist Miguelito, the retrograde Susanita, Mafalda is the only one to refuse the world as it is presented.

“In Argentina, I had to censor myself because at the beginning I was clearly asked 'no military, no religious, no sex'. And suddenly, I started talking about it all, but in a different way, ”Quino said.

Teilor Stone has been a reporter on the news desk since 2013. Before that she wrote about young adolescence and family dynamics for Styles and was the legal affairs correspondent for the Metro desk. Before joining The Bobr Times, Teilor Stone worked as a staff writer at the Village Voice and a freelancer for Newsday, The Wall Street Journal, GQ and Mirabella. To get in touch, contact me through my teilor@nizhtimes.com 1-800-268-7116
Previous ArticleBerlinale unveils new evidence of founder's Nazi past
Next ArticleStar Académie and La Voix in the red zone