Beaudin's resolution on transparency was defeated 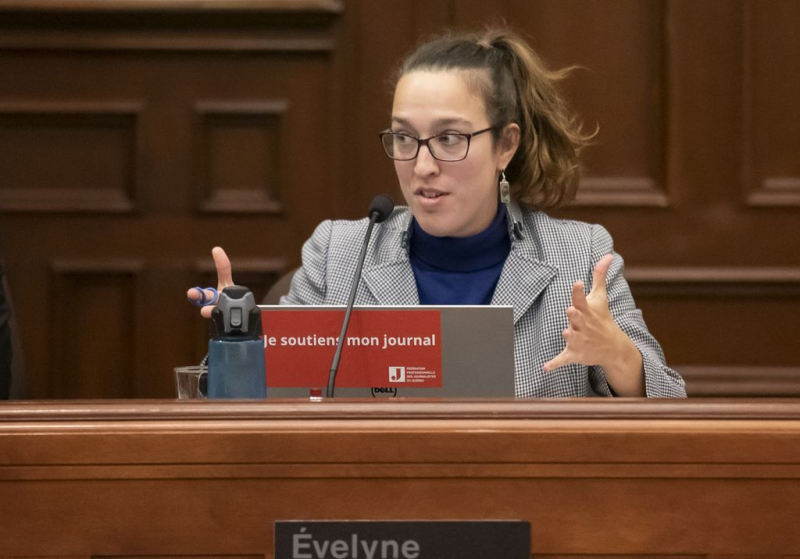 Evelyne Beaudin has not succeeded in convincing the majority of her colleagues to support her resolution on the supervision of in camera.

Jonathan Custeau La Tribune SHERBROOKE – The resolution that councilor Évelyne Beaudin had promised to present to city council concerning the supervision of closed doors was defeated on Monday evening by her colleagues. Nine elected officials voted against the proposal to ask the Government of Quebec to define tighter rules for the subjects discussed behind closed doors.

In her resolution, Ms. Beaudin wanted the municipal council to ask the Quebec government to apply the recommendation of the Charbonneau Commission to limit the exceptions that allow debates to be held behind closed doors in municipalities. It proposed to be inspired by sections 239 and 239.1 of the Ontario Municipal Act, before the next election.

“This is not a solution proposed by Sherbrooke Citoyen: it comes from former mayors who have looked into the issue of corruption and collusion and who have found this problem important enough to formulate an unequivocal proposal. The commissioners believe that the closed doors should be confined to narrow topics. I see myself more as a megaphone for Justice Charbonneau.

In the end, she will have obtained the support of Annie Godbout, Vincent Boutin, Marc Denault, Pierre Avard and Karine Godbout.

The CAQ rejects a motion on transparency in municipalities

The argument often raised by the majority which overturned Ms. Beaudin's proposal is that of the autonomy of municipalities. “The idea behind it is noble. We want more and more debates to be done publicly. But we have always demanded more autonomy from the government of Quebec and here we would ask it to rule on what must be public and in camera? By wanting to make everything public, we favor a counter-power. We will never be able to prevent discussions behind closed doors, ”commented Rémi Demers, agreeing that several subjects discussed in private in the past could have been presented directly in public.

Paul Gingues does not believe that citizens are deprived of information. “I agree that we should be more selective in the choice of files behind closed doors, but not to the point that the Quebec government intervenes. This resolution would be futile because the CAQ has already rejected a motion to this effect. “

Considering the two hours of public presentations before Monday's city council, Chantal L'Espérance says she doesn't need Quebec to dictate the rules. “We can set rules between us to bring more things to the public. “

Pierre Tremblay said he had never had any complaints from citizens who would like more discussions to take place in public.

For Julien Lachance, behind closed doors have their place. “For some discussions, if the media are there, an elected official may paint himself in the area and have difficulty changing his opinion. He does not understand how 15 independent elected officials could all be corrupt.

Nicole Bergeron hammered home the principle of municipal autonomy and recalled that no decision is taken behind closed doors. “These are working committees for issues on which we will have to take a position later. I maintain that we must have space between us for discussions in camera. “

Karine Godbout said she was sensitive to the arguments of her colleagues and recognizes the importance of closed doors. “But is it relevant for all topics? Section 239 of the Ontario law helps to establish these matters. “

Vincent Boutin underlines that in the previous mandate, subjects were brought directly to the public workshop. “In the process of the bill, we could do a common Quebec reflection. This is something that could be very interesting, even if I understand the issue of municipal autonomy. I am comfortable sending the message that for us it is important to have a transparent debate. “

Annie Godbout points out that too many discussions have taken place behind closed doors in the past three years.

Pierre Avard believes that the majority of exchanges should be public. “People need to know how we position ourselves in each of the issues. I also see the issue of efficiency, as members of the executive hear cases up to three times. By respecting the criteria of the resolution, we could operate more efficiently. “

Évelyne Beaudin says she heard her colleagues. “You don't want the Quebec government telling us what to do. I can understand it. The good news is that we have the necessary autonomy to act for transparency. The ideal will therefore be to come back with a proposal that could be debated and amended to our liking to give us rules. “

Teilor Stone has been a reporter on the news desk since 2013. Before that she wrote about young adolescence and family dynamics for Styles and was the legal affairs correspondent for the Metro desk. Before joining The Bobr Times, Teilor Stone worked as a staff writer at the Village Voice and a freelancer for Newsday, The Wall Street Journal, GQ and Mirabella. To get in touch, contact me through my teilor@nizhtimes.com 1-800-268-7116
Previous Article81 high risk accident sites in the streets of Sherbrooke
Next ArticleA mover absent on moving day