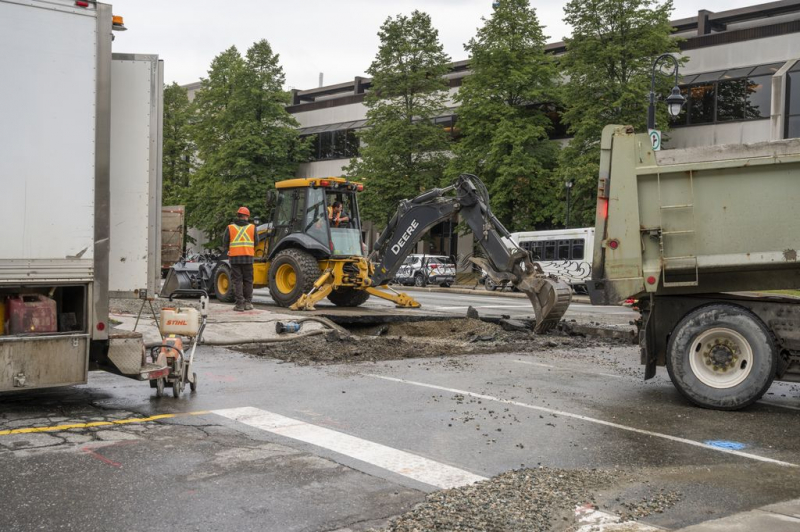 King Street westbound is closed between Belvédère and Camirand streets.

René-Charles Quirion La Tribune The City of Sherbrooke has had a lot to do in the last few hours by repairing two breaks on major pipes in its water system.

If the infrastructure department had already planned the work to repair a breach made in the main pipe between Lake Memphremagog and the JM.Jeanson treatment plant, a major leak that occurred on a century-old pipe in downtown Sherbrooke came to disrupt the streak Thursday morning.

This breakage of a ten-inch cast iron pipe at the corner of King Ouest and Camirand streets resulted in traffic problems.

The interim director in the infrastructure service at the City of Sherbrooke, Michel Cyr, explains that municipal employees quickly intervened.

“A leak was detected by our alert system around 6:20 am Our employees already at work at that time were able to intervene quickly,” explains Cyr.

King Street eastbound was closed between Belvédère and Camirand streets all day.

“The leak was located near a fire hydrant. The water supply was shut off by valves located nearby. The affected sector could thus be isolated to allow excavation work. The presence of wires from Bell and Hydro-Sherbrooke for the traffic lights made our team's task more complex, ”explains Michel Cyr of the City of Sherbrooke. 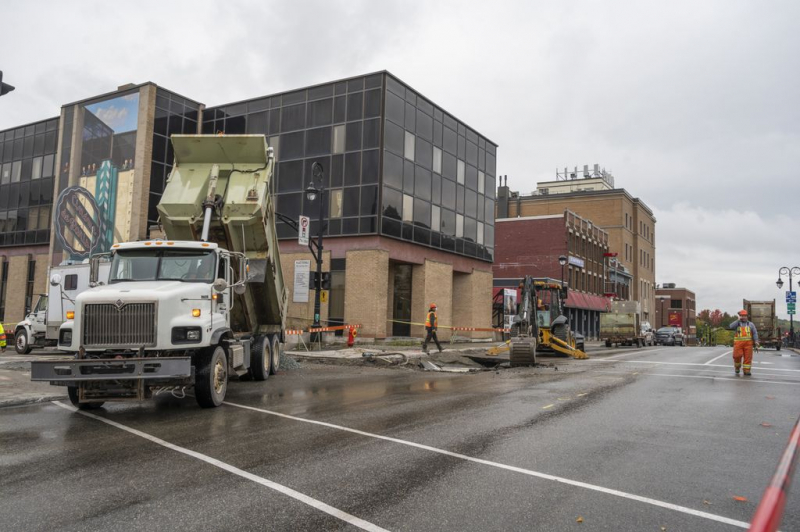 For the moment, the City of Sherbrooke has suspended work on the main water pipe scheduled for Friday. Photo La Tribune, Frédéric Côté

Some buildings, including Bell Canada's one, had their water supply cut off, while others were subject to a boil water advisory.

“Other water pipes in the area supply most of the buildings in the area,” says Michel Cyr.

The SPS has been deployed in the area.

“Our patrollers were assigned on site to block access to these streets as well as to control the flow of traffic,” explains Sherbrooke Police Department spokesperson Martin Carrier.

A lane will be cut again on Friday morning in an easterly direction to allow the paving to be carried out.

The City of Sherbrooke was still able to carry out the work on the main water pipe in parallel.

“We have completed the work on the main pipe. It was private work that caused this breakage. We filled the pipe at the end of the day before proceeding with the restart. The employees assigned to this repair were very efficient, ”assures Michel Cyr of the City of Sherbrooke.

The instruction prohibiting the outdoor use of drinking water and the restriction of certain activities were lifted on Thursday evening.

Teilor Stone has been a reporter on the news desk since 2013. Before that she wrote about young adolescence and family dynamics for Styles and was the legal affairs correspondent for the Metro desk. Before joining The Bobr Times, Teilor Stone worked as a staff writer at the Village Voice and a freelancer for Newsday, The Wall Street Journal, GQ and Mirabella. To get in touch, contact me through my teilor@nizhtimes.com 1-800-268-7116
Previous ArticleSherbrooke residents invited to reduce their drinking water consumption
Next ArticleCOVID: The shortfall less important than expected in Sherbrooke