Calamine is the “lesbian woke on the autotune” of Quebec rap 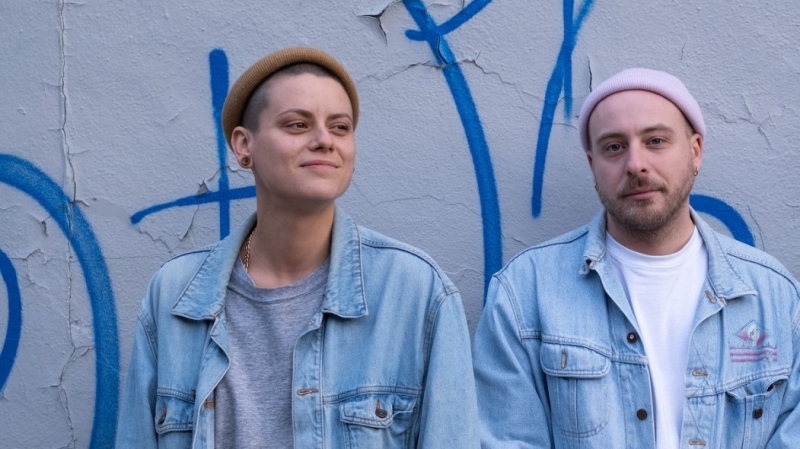 Rapper Calamine and her beatmaker, Kèthe Magané, both proudly queer and active in the Quebec hip-hop community.

By calling herself a “lesbian woke on autotune”, queer, feminist and anti-capitalist rapper Calamine is reappropriating the words of a surfer who thought she was insulting her. His second album, whose title is composed of this epithet, is a festive call to revolt against the patriarchy.

Being “a nice scarecrow figure for the right” amuses Calamine because there is nothing scary about her. When she read her detractor's comment calling her a “lesbian woke on autotune”, the rapper “thought it was too good”.

Immediately, without necessarily knowing that it is this title that her album would take, she was inspired to write the song Lesbienne woke sur l'autotune, an angry, but above all ironic hymn, which is intended as a response to the famous comment .

Changing the world, one song at a time

Among the tracks from her second opus are the “wokes“ themes that are dear to Calamine, such as feminism, queerness, veganism, cycling, social justice and decolonialism.

The one who won the Félix-Leclerc Song Prize last year simply does not see how she could be an activist other than through her art.

But Calamine does not want to fall into the trap of writing only texts either. engaged. If the artist likes to convey her claims through music, she wants her songs to remain accessible and her ideas to be “funny and not too heavy”.

“On albums, what is most difficult is surely to reconcile the dosage. […] Above all, I must not forget to have fun”, she says.

That is why we also find in a lo-fi, jazz and RnB productions by Kèthe Magané with dancing choruses, including BAD B*TCH and OFFICIELLE GOUINE, or even love songs like AMAZONE and RAINY DAYS.

At the beginning of OH BOY, a song written by Calamine at a time when she was feeling “outrage”, Denise Bombardier's voice can be heard saying that our society present day is worse than that imagined by George Orwell in 1984.

Indeed, the entire frame of the album is punctuated with crisp samples of media personalities. “Frankly, it is without malice! It's rather funny and silly so much that it doesn't make sense what they say, “says Calamine.

The excerpts used, which can easily be found on the Internet, aim to put the work in its media and political context with humor, explains the rapper. “These people [that we can hear in the audio extracts] are extremely visible, they are on all the stands, so I think it's good to sprinkle their words throughout the album to show that it doesn't go away. not out of nowhere, our demands”, she specifies.

Consistent with her claims

Although she has received offers from “virtually every label [record label] of rap, Calamine remains an independent artist. It is quite simply a way for her to be consistent with her feminist and anti-capitalist demands.

“The music industry is a heteropatriarchal industry like any other,” she thinks.

And the rapper doesn't want to sign with a record label just because “the shit of the hour” is “to be woke“. “All of a sudden, you are going to make money with leftist feminists. Now, is that your business?” she asks.

The singer-songwriter also thinks she works best on her own. “These are people [those employed in record companies] who have always made decisions based on what benefits men. It's not today that they're going to start working in the direction I want to go,” she says.

In this same desire to offer more diversity in the musical landscape, Calamine has chosen to approach only female artists or queer people for its collaborations. “I want the money [from the grants] to come back to the community and that we make more women and more queer people work as much as possible to apply the principles that I claim,” she says.

Teilor Stone has been a reporter on the news desk since 2013. Before that she wrote about young adolescence and family dynamics for Styles and was the legal affairs correspondent for the Metro desk. Before joining The Bobr Times, Teilor Stone worked as a staff writer at the Village Voice and a freelancer for Newsday, The Wall Street Journal, GQ and Mirabella. To get in touch, contact me through my teilor@nizhtimes.com 1-800-268-7116
Previous ArticleOn vacation with Jack Johnson
Next ArticleA documentary miniseries on two Quebec drug traffickers