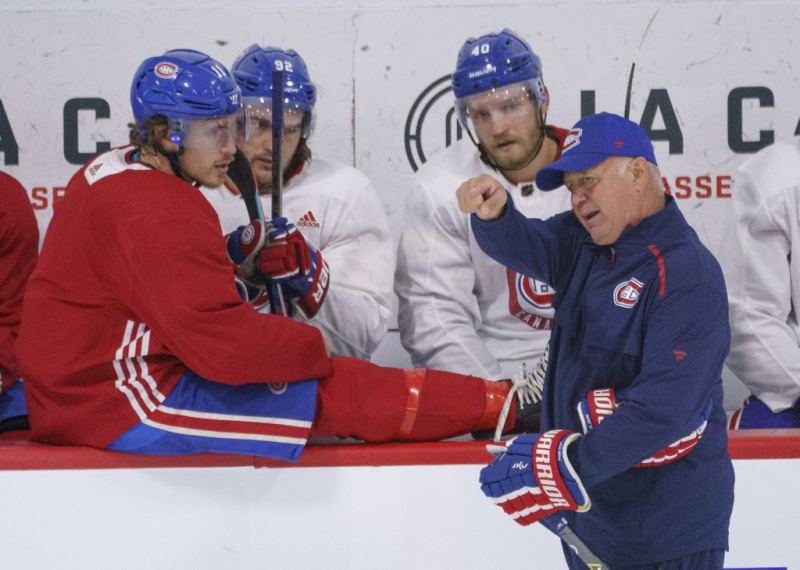 Claude Julien discussing with his players

Share August 13, 2020 2:13 p.m. Updated at 8:27 p.m. Share Claude Julien suffered a chest discomfort Alexandre Geoffrion-McInnis The Canadian Press The Montreal Canadiens have lost the services of one of their trusted men. Head coach Claude Julien experienced chest pain the night after Wednesday's game against the Philadelphia Flyers and was taken to a Toronto-area hospital.

“He underwent tests to determine exactly the nature of his condition. This situation has nothing to do with COVID-19, ”Bergevin insisted.

Julien should not be back behind the bench of the Habs before the end of the series against the Flyers. As a result, assistant coach Kirk Muller will be called upon to assume the role of head coach on an interim basis.

“We understand that Kirk does not speak French, but these are exceptional circumstances and we ask for your understanding,” said Bergevin, addressing a sensitive subject for many Quebecers.

The Canadian's chief medical officer, Dr. David S. Mulder, is also monitoring Julien's state of health. Bergevin said he received good news from him early in the afternoon and insisted that Julien was in good hands.

Julien's family has also been informed of the situation, but Bergevin admitted not knowing if Julien's wife would join him at the hospital in Toronto, as the context of the pandemic complicates visits.

Habs captain Shea Weber learned the news at lunch, then Bergevin informed the rest of the players when they arrived at the training center.

“You're a little shocked when you learn something like this,” Weber said. You worry first about the health of the person. We were already motivated. We will be even more so. ”

Game 2 of the Eastern Conference quarter-final series between the Canadiens and the Flyers will be played at 3 p.m. Friday. The Flyers won the first game 2-1.

During his NHL career, Julien also served as the head coach of the New Jersey Devils and Boston Bruins. He guided them towards the conquest of the Stanley Cup in 2011.

“In all areas, there is stress,” said Flyers head coach Alain Vigneault, who has known Julien for forty years. We don't know exactly what happened. The job of coach is a job that has its degree of difficulty, we all learn to manage it.

“There is no doubt that everyone in hockey is hoping he will be okay.”

Muller was head coach of the Carolina Hurricanes from 2011 to 2014, in addition to being an assistant or associate coach with the Canadiens from 2006 to 2011 and since 2016. He will be supported behind the bench by Dominique Ducharme and Luke Richardson.

“In the heat of the game, Kirk will have 100 percent carte blanche to make decisions he believes are necessary to help the team win,” said Bergevin.

“I met the coaches this morning and I have confidence in them. It was the players who beat the Pittsburgh Penguins, not the coaches. We are still counting on the same group, ”he added.

If ever the Canadian were to extend his adventure by eliminating the Flyers, Julien could come back behind the team bench in the next round, Bergevin said. Julien will, however, have to respect the protocol of the NHL before returning to the circuit bubble in Toronto.

According to the protocol, a member of a team wanting to return to the bubble after leaving it must provide four consecutive negative results from tests for COVID-19 carried out over a period of four days. The person may also have to undergo a quarantine of up to 14 days.

Teilor Stone has been a reporter on the news desk since 2013. Before that she wrote about young adolescence and family dynamics for Styles and was the legal affairs correspondent for the Metro desk. Before joining The Bobr Times, Teilor Stone worked as a staff writer at the Village Voice and a freelancer for Newsday, The Wall Street Journal, GQ and Mirabella. To get in touch, contact me through my teilor@nizhtimes.com 1-800-268-7116
Previous ArticleAmerican draft: the QMJHL must launch its charm operation
Next ArticleJulien had a stent inserted in a coronary artery