Completely under the spell of “Completely high school” 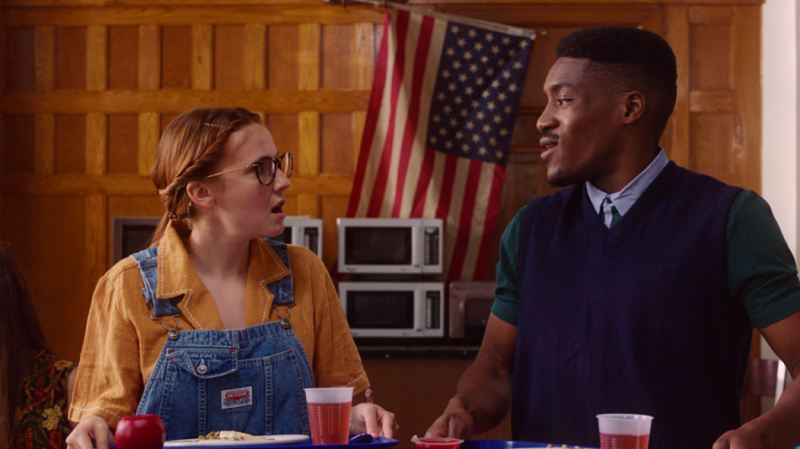 If you grew up watching Degrassi: the new generation and The Scott brothers dubbed in French, it's a safe bet that you'll love the Quebec webseries Complément lycée , which makes fun with a big dose of humor and a touch of nostalgia of these series for teenagers from the turn of the 2000s.

In order to faithfully recreate the spirit of the dubbed shows of our youth, the eight episodes of Complément lycée were first shot in English and then dubbed into so-called “international” French.

So you can hear “man”, “brother”, “mash”, “girl”, “bitch” as well as completely crazy expressions, like “I'm playing the trombone”. (We'll let you guess what that means.)

The flash of genius goes to comedians Rosalie Vaillancourt and Pierre-Yves Roy-Desmarais, who play respectively Allie and Brian (pronounced Brayan).

The first is the short story from New Garden East Valley High School in the suburbs of Chicago. The second is the quarterback of the football team, thus the most popular boy in the school.

A faithful and hilarious parody

By playing brilliantly with the codes of the children's series of 20 years ago, the director Alec Pronovost and the team of writers have created a hilarious parody that awakens in us the memories of the best episodes of Gossip Girl and Degrassi: the new generation , when Drake called himself Aubrey Graham.

Same as to situate the webseries in time, Completely high school opens with a fake quote from George W. Bush. Yes, it is 2001.

Completely high school is to American teenage dramas what The heart has its reasons is in the soap novels.

Alec Pronovost says he filmed this pastiche with a lot of love, and it shows in the end result. He marvelously mocks the intrigues that marked the dubbing of our teenage years.

Competition for the presidency of the high school, love triangles, female rivalries, drug trafficking, pressure to perform in sports and the desire to be popular animate the different characters of the webseries.

Si Completely high school is such a success, it is also thanks to the impeccable play of the actors. All rightly exaggerate the faults of their characters.

A lot of care has also been paid to details. It ranges from the opening credits – a female pop-folk song in English – to the drawings on the lockers and the posters lining the walls of the school.

Not to mention the most important: the absurd humor and immature of the series elicits several loud bursts of laughter. In short, we are completely under the spell of Completely high school .

Teilor Stone has been a reporter on the news desk since 2013. Before that she wrote about young adolescence and family dynamics for Styles and was the legal affairs correspondent for the Metro desk. Before joining The Bobr Times, Teilor Stone worked as a staff writer at the Village Voice and a freelancer for Newsday, The Wall Street Journal, GQ and Mirabella. To get in touch, contact me through my teilor@nizhtimes.com 1-800-268-7116
Previous ArticleWe go to the cinema to see “Prayer for a lost mitten”
Next ArticleBallet: The Nutcracker relives on stage in a new formula