Compulsory vaccination “not in the boxes”, says Boileau 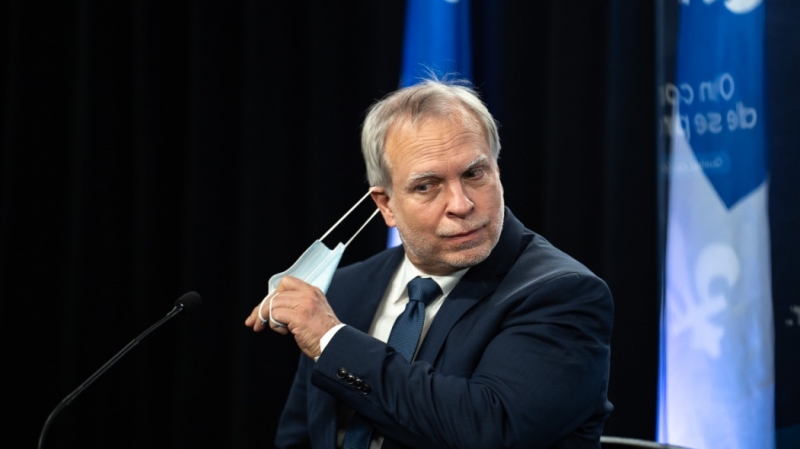 In a press conference without the government on Thursday, the acting national director of public health, Dr. Boileau, dismissed the idea of ​​compulsory vaccination.

It does not consider actuality measurement. She “is not in the cards,” he says. “We know it exists, but we know it's not the time to offer it. Currently it is not in the boxes. I think that we have a demonstrated capacity at the Quebec level that people can opt for vaccination. We have one of the most vaccinated populations in the world for a two-dose vaccination. There, we must add the booster dose, we trust that by expressing this message it will reach the right ears. […] On the other hand, there are other approaches that are put forward, such as those of the government led by Minister Carmant.”

Requested by many Quebec political actors , especially from the opposition, Public Health held its first press conference separate from the government this afternoon since the start of the pandemic.

It’s on the theme of prudence that Dr. Boileau inaugurated his first “independent” conference. Despite a partial deconfinement which is on the horizon, and while Mr. Boileau foresees a certain plateau in terms of hospitalizations, he does not move forward on possible other measures.

Dr. Boileau says he takes into account the concerns of Quebecers and understands that the effects of confinement are certainly becoming painful. But, “we must avoid any step back, so as not to announce things and then step back. We take measures based on science, to propose measures aimed at returning to normal,” he explains.

Public Health recommendations will be issued “week after week”. Dr. Boileau says he is not “being the good god” and cannot ensure that the partial deconfinement will turn into total deconfinement. “I am not the good god and I do not know the future. If we want to put the odds on our side for total deconfinement, it is by making sure to put the necessary measures in place to avoid overheating of hospitalizations and that we benefit from vaccination. […] It is difficult to give a timetable, because it depends on the capacity in the hospitals.”

One of the ways to achieve the goal of deconfinement essentially involves vaccination, especially towards the third dose, argues Dr Boileau.

“We are planning a reduction in beds occupied by covid patients, but in a modest way. However, we remain above the level 4 load shedding established by Quebec. In intensive care, we expect the same decrease, ”she adds. However, the INESSS model does not include the back-to-school scenario, “these are short-term projections”.

While a partial deconfinement begins on Monday, Quebec is recording&nbsp ;again today, a decrease in hospitalizations related to COVID-19, with a decrease of 117 people. A total of 3,153 people are still bedridden in hospitals across the province. On the intensive care side, Quebec also recorded a drop of 17 people, for a total of 235 people currently admitted to intensive care.

Teilor Stone has been a reporter on the news desk since 2013. Before that she wrote about young adolescence and family dynamics for Styles and was the legal affairs correspondent for the Metro desk. Before joining The Bobr Times, Teilor Stone worked as a staff writer at the Village Voice and a freelancer for Newsday, The Wall Street Journal, GQ and Mirabella. To get in touch, contact me through my teilor@nizhtimes.com 1-800-268-7116
Previous ArticleCOVID-19: significant drop in hospitalizations
Next ArticleQuebec partners committed to fighting CO2 emissions in Latin America