Conservatives will no longer have to constantly distance themselves from Trump

By Teilor Stoneon November 15, 2020in Politic 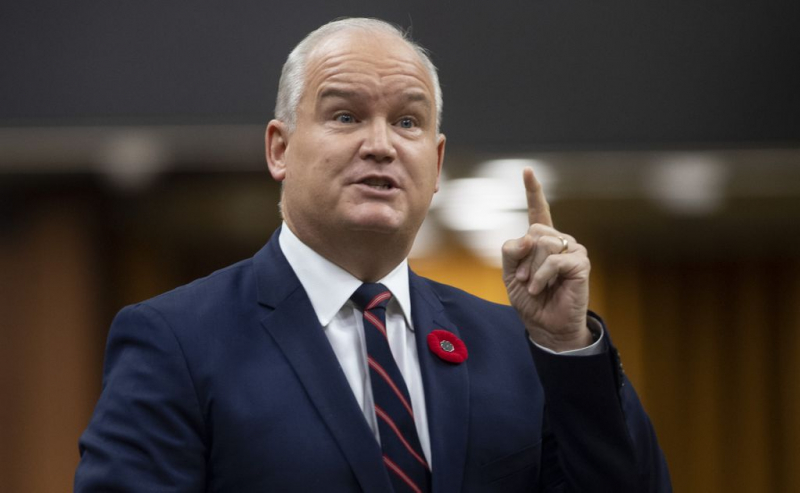 Leader of the Conservative Party of Canada, Erin O'Toole

But now, it will be Justin Trudeau's turn to say whether he supports Democrat Joe Biden in his various decisions, instead of the conservatives who will be questioned about Donald Trump.

For four years, President Trump has served as a scarecrow for opponents of the Conservatives, who accuse him of sowing division in the United States and hint that if a Conservative were elected in Canada, “Trumpism” would be imported here.

During the last federal election campaign, Elizabeth May, then leader of the Green Party, made an explicit comparison, suggesting that then Conservative leader Andrew Scheer was downright a puppet of the US president.

“I looked at your public policies on foreign affairs today, Andrew, and I understood that if someone wanted to know where you are, you just have to find what Trump wants,” she said. launched during the leaders' debate.

And if the Tories form government as a result of the next election, a Democratic president could be helpful, said Garry Keller, who held several senior advisory positions in the last Tory government.

Republican President George W. Bush was in office between 2000 and 2008, and the Conservatives came to power in 2006. Backing up with him could be politically toxic, Keller said, although some government policies. President Bush made sense to Canada.

“When [Barack] Obama arrived, the math completely changed,” he noted.

Mr Keller asserted that in the Obama era it became common for ministers to draw closer to the US president, linking their policies to those of the Obama administration – rather than saying they were aligned with those of the United States in general.

On the other hand, the decision to expressly court the union vote could also be seen as an attempt at populism that worked for Donald Trump, who reached out to working-class Americans who felt left out by politicians.

“So it made it possible to do things with the Americans on certain things that you could not have done under the Bush administration.”

The vast majority of Canadians from all political walks of life tell pollsters over and over again that they don't like Donald Trump, but of those who do, most also tell pollsters that they would vote Conservative. Among them: Conservative Senate Leader Don Plett, who expressed support for Trump's second term in a recent Senate speech.

President Trump will always hold a sufficiently large place in collective memory that the Conservatives can be compared to him, said Andrea Van Vugt, who was Stephen Harper's foreign policy adviser.

“The Conservative Party and Erin O'Toole's team should expect this,” she said.

“They should anticipate it, they should understand how they are going to defend themselves.”

Ms Van Vugt noted, however, that if Mr Trump had actually poisoned conservatism in the minds of voters, a large number of Tory prime ministers would not have been elected in the past four years.

Among them is Ontario Premier Doug Ford, who, with his “common man” style, is seen as being closest to Donald Trump.

Some might say that Erin O'Toole learned a few lessons from Mr. Trump.

His slogan for the leadership campaign, “Take Back Canada,” was seen by some as a Nordic version of Donald Trump's “Make America Great Again”. Mr. O'Toole, however, is much more open to immigration and free trade than the US president.

“I think the Canadians, if they thought about it for a minute, they would say, 'Well, you know, maybe it's time for us to take a strong stand on China and the only recent memory we have of 'a politician doing this is Trump,' ”she said.

“And while we wouldn't agree with anything else that he's doing, it's probably one of those areas.”

On the other hand, the decision to expressly court the union vote could also be seen as an attempt at populism that worked for Donald Trump, who reached out to working-class Americans who felt left out by politicians.

Donald Trump won in 2016 because of their support, and the reality of the 2020 presidential election is that in many cases he still had their support, Van Vugt said.

But in some ways, she said, the results in the United States mirror what happened in Canada's 2019 federal election: a minority Liberal government.

In both countries, voters told the outgoing government that it did not deserve another chance to fully control the government, but neither did they fully trust the other side, she claimed.

Understanding what is behind this and building a message that reaches people to gain their trust and a strong mandate to govern is a must for Canadian politicians, added Ms. Van Vugt.

“For any political party – the Conservatives, the Liberals, the NDP – this is the next election trick.”

Teilor Stone has been a reporter on the news desk since 2013. Before that she wrote about young adolescence and family dynamics for Styles and was the legal affairs correspondent for the Metro desk. Before joining The Bobr Times, Teilor Stone worked as a staff writer at the Village Voice and a freelancer for Newsday, The Wall Street Journal, GQ and Mirabella. To get in touch, contact me through my teilor@nizhtimes.com 1-800-268-7116
Previous ArticleQuébec solidaire fears a “monumental failure” of the committee on racism
Next ArticleÉric Girard projections: a parliamentary budget officer would have said no