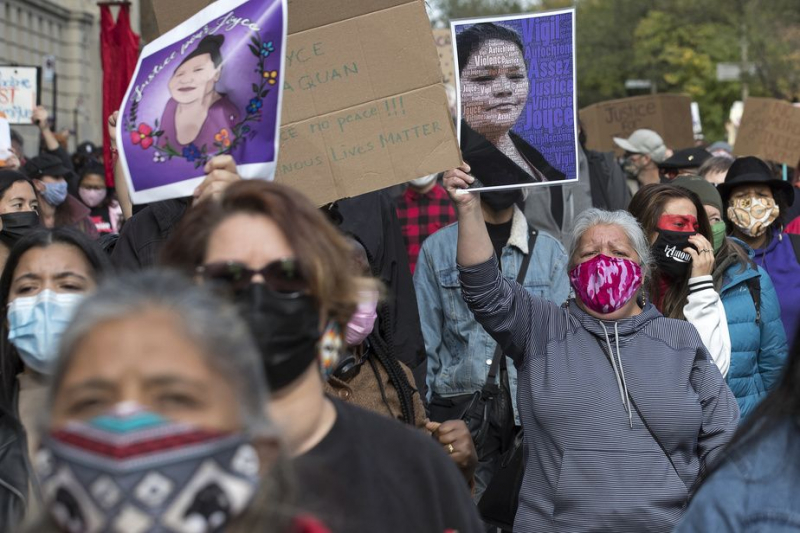 A demonstration in memory of Joyce Echaquan took place at Place Émilie-Gamelin on Saturday in Montreal.

Share October 5, 2020 5:03 p.m. Updated at 7:06 p.m. Share Death of Joyce Echaquan: Prime Minister François Legault ready to apologize Stéphanie Marin The Canadian Press MONTREAL – Prime Minister François Legault said he was ready to apologize to the family of Joyce Echaquan, who died a week ago after being insulted in a degrading manner by employees of the Joliette hospital. “We will find the right way to do it,” said the Prime Minister at the end of the day, Monday, during a press briefing on the situation of COVID-19.

“We will find the right way to do it”, said the Prime Minister at the end of the day, Monday, during a press briefing on the situation of COVID-19.

He reiterated that what she suffered is “totally unacceptable”.

The Atikamekw community wishes precisely such an apology from the government, reported earlier the head of the Atikamekw Council of Manawan, Paul-Émile Ottawa, after a meeting Monday with the Prime Minister.

Shortly before her death, the Atikamekw mother filmed herself from her hospital bed with her cell phone. In the video, a nurse and a patient care attendant can be heard entering her room and making disparaging remarks.

On Saturday, Deputy Prime Minister Geneviève Guilbault asked the Coroner's Office to hold a public inquiry into the death of Joyce Echaquan. Chief Ottawa has indicated that the Atikamekw community also wants to be able to participate in the investigation and make its voice heard.

At the end of their meeting on Monday, Chief Ottawa said that discussions with the Prime Minister and Minister of Indigenous Affairs, Sylvie D'Amours, were “cordial and direct”.

The leaders come out “optimistic” but “cautious”, he told reporters gathered in front of the Montreal office of Mr. Legault. “I am optimistic, but I am still awaiting the results,” added the chief the grand chief of the Council of the Atikamekw Nation, Constant Awashish.

Mr. Ottawa called on the government to make the teaching of indigenous culture compulsory for the medical profession and to impose internships within the communities for future doctors and nurses.

“We must rebuild the confidence of Atikamekw users.”

Later, during his own press briefing, the Prime Minister reported that priorities were determined during the meeting: first, the training of all the staff of the Joliette hospital, and then, that of the employees of all networks, “not just in the health sector”.

It was also agreed with the chiefs to plan a major awareness campaign to fight racism.

“It is high time to take action,” said Mr. Legault.

As for the next step, Paul-Émile Ottawa indicated that the chiefs have undertaken to meet frequently with the Minister of Native Affairs, Sylvie D'Amours. The Minister of Health, Christian Dubé, was also arrested, he added.

“For me, justice for Joyce is to eradicate racism and respect every citizen,” said Chief Ottawa.

He said he reminded the Prime Minister that, “as leaders, we have a responsibility to build bridges between our peoples and our societies”.

Teilor Stone has been a reporter on the news desk since 2013. Before that she wrote about young adolescence and family dynamics for Styles and was the legal affairs correspondent for the Metro desk. Before joining The Bobr Times, Teilor Stone worked as a staff writer at the Village Voice and a freelancer for Newsday, The Wall Street Journal, GQ and Mirabella. To get in touch, contact me through my teilor@nizhtimes.com 1-800-268-7116
Previous ArticleThe meeting between Legault and the Atikamekw chiefs set for Monday
Next ArticleJohn Turner's dedication recognized at his funeral [VIDEO]