Demonstration: furniture in front of the offices of François Legault 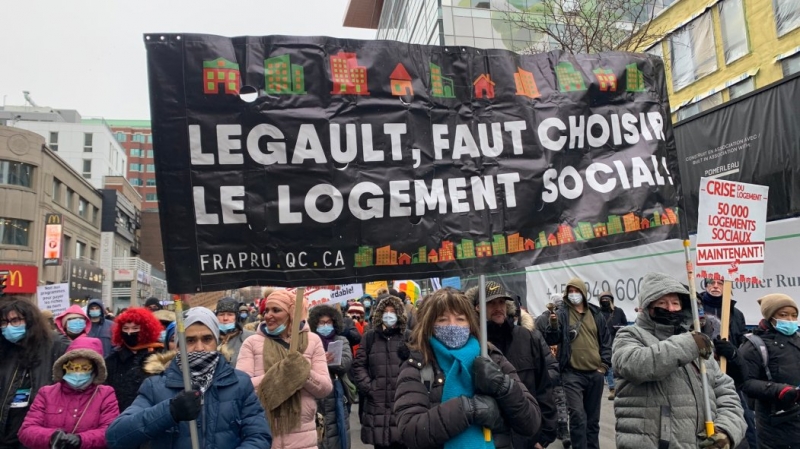 FRAPRU demonstration for massive investments in social housing in the next Quebec budget.

FRAPRU and many community organizations demonstrated Saturday in Montreal to demand massive and immediate investments in social housing and the maintenance of the AccèsLogis program.

Leaving in the early afternoon from Place Norman-Bethune, the demonstrators marched to the offices of Prime Minister François Legault to urge the minister to deal with the housing crisis. Furniture was left behind as a symbol of the fate of evicted tenants.

More than half of social housing projects in Montreal are currently on hold due to lack of funding in the AccèsLogis program, according to FRAPRU.

“The last three budgets of the CAQ have granted insignificant funding for new social housing and the AccèsLogis program has not been properly indexed for more than 10 years” deplores Véronique Laflamme, spokesperson for the FRAPRU.

According to the group, the new Quebec Affordable Housing Program (PHAQ), announced by the Minister of Municipal Affairs and Housing, Andrée Laforest, will not solve housing crises since it is not intended for households. low income. In the AccèsLogis program, about half of the units are reserved for people with low incomes for whom the rent is calculated according to their ability to pay.

What will be left for the poorest households?

Véronique Plante, about the PHAQ

The Municipal Housing Office points out that it has received 800 new HLM requests over the past year. The waiting list also includes almost 24,000 households.

AccèsLogis “slow” and “very heavy”, according to Laforest

When announcing the new Quebec Affordable Housing Program, Minister Laforest described the AccèsLogis program as “slow” and “very cumbersome”. She stressed that the PHAQ will give “a serious boost” to the program already in place. The Minister also made a point of mentioning that for the moment, the new program will not replace AccèsLogis. The idea is rather that they work in complementarity.

When asked about the difference between the two programs, Minister Laforest explained that the PHAQ will make it possible to do business directly with private promoters.

FRAPRU, for its part, maintains that even the private housing that the new program will subsidize will not remain affordable in the long term.

Teilor Stone has been a reporter on the news desk since 2013. Before that she wrote about young adolescence and family dynamics for Styles and was the legal affairs correspondent for the Metro desk. Before joining The Bobr Times, Teilor Stone worked as a staff writer at the Village Voice and a freelancer for Newsday, The Wall Street Journal, GQ and Mirabella. To get in touch, contact me through my teilor@nizhtimes.com 1-800-268-7116
Previous ArticleEggsquis restaurants are hiring in a funny way
Next ArticleAnti-racists and pro-truckers oppose Montreal