Denault gets impatient with Bitfarms case 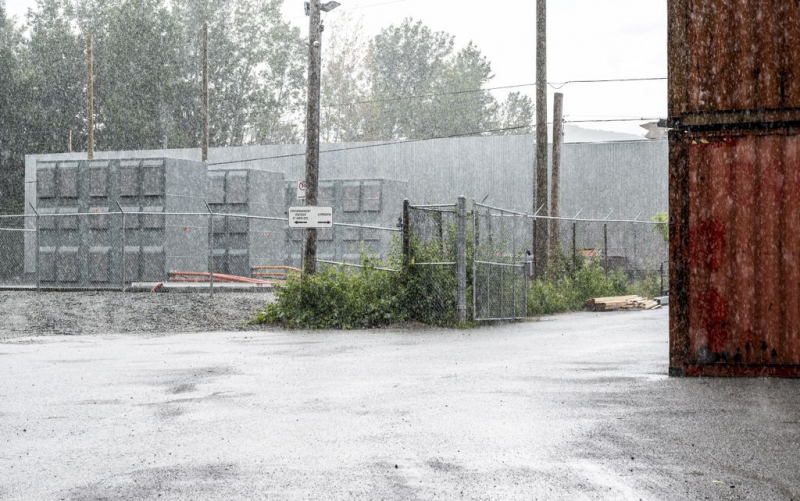 Bitfarms added new sound barriers in 2020 in an attempt to reduce noise emanating from its factory on rue de la Pointe.

Jonathan Custeau La Tribune Councilor Marc Denault is fed up with the noise generated by the cryptocurrency company Bitfarms, in the Lucien-Blanchard park area. Citing the notices of non-compliance issued by the Ministry of the Environment since the beginning of 2020, he describes the situation as terrifying and wants an intervention from the provincial deputies.

At the Ministry of the Environment and the Fight against Climate Change, it is confirmed that two notices of non-compliance have been issued to Bitfarms. Before imposing sanctions, the ministry must carry out analyzes. It is reported that in the present case, the noise measurements are subject to rigorous analyzes.

“We are falling into the red zone and we are asking citizens to stay at home and limit going out. When you've had problems with your neighbors for 500 days, it starts to be long. We were surprised to learn that Bitfarms was not in compliance with environmental law and that its actions could harm the health of citizens. It's still special and even terrifying, ”Mr. Denault told city council on Monday.

“I ask our elected provincial officials, Ms. [Geneviève] Hébert, Ms. [Christine] Labrie, Mr. [André] Bachand and Mr. [Gilles] Bélanger, in Magog, to intervene with the Minister of the Environment to put additional pressure. On July 10, we gave our officials a mandate to find a solution and come to an agreement for both parties, something that was not done. It's deplorable that people are forced to shut themselves up in their homes with this noise. “

Marc Denault also asks the municipal services to give tickets to Bitfarms to help find a short-term solution. “People are out of breath, out of nerves. “

At the same time, the Golf District Councilor deplores the fact that the City was not notified by the ministry when the notices of non-compliance were sent. “I didn't know about it. The chair of the environment committee was not aware. From the moment we speak of a nuisance to the health of citizens, we no longer fool around. Bitfarms was in good faith, but now we start to stretch the elastic. “

Councilor Paul Gingues agrees. “The notices of non-compliance are unequivocal. The factory is breaking the law. We will try to meet with citizens as soon as possible to find actions. I would also like to hear from members on this. “

At the City of Sherbrooke, it is simply indicated that negotiations are still underway with Bitfarms. “We will not comment further on the matter so as not to harm the talks. The objective remains to resolve the problem as quickly as possible and we will first have to present the file to the municipal council, ”we are content to say to the Communications Department.

The City therefore refuses to reveal the results of the sound study that it carried out after the last mitigation work by Bitfarms or even to say whether it has the said results in hand. Bitfarms had for its part carried out a sound study with an acoustician and concluded in August that its sound barrier walls are efficient.

Marc Duchesne, spokesperson for the company, sticks to a speech similar to that of the City. “The collaboration with all parties is good. I prefer to keep the details of conversations secret. We can't wait for this to be resolved, ”he said, without confirming whether Bitfarms has the data from the city's study in hand.

If Bitfarms does not comply with the demands of the Ministry of the Environment, it faces fines.

MP Christine Labrie confirms having obtained a meeting with Bitfarms and notes that the Ministry of the Environment seems to be doing an adequate job on the file. “I expect him to follow up closely. We are faced with a company that is doing its homework and wanting to resolve the situation. The location of the business near a natural environment and a residential area is a problem, but it respects the current zoning. It is special, however, that the City is not informed of notices of non-compliance. There should be more transparency in there. “

At the Ministry of the Environment, it is reported that when the analyzes are completed, it will be possible to assess how to deal with the shortcomings. The ministry did not issue an authorization for the establishment of Bitfarms because its type of activity does not fall under the Environmental Quality Law. The ministry will be able to intervene “if it proves that the noise is likely to affect the well-being or the comfort of the human being”.

Recall that the City had offered in July a third phase of Bitfarms mitigation work, in exchange for which it would buy a plot of land belonging to the company for $ 385,000.

Teilor Stone has been a reporter on the news desk since 2013. Before that she wrote about young adolescence and family dynamics for Styles and was the legal affairs correspondent for the Metro desk. Before joining The Bobr Times, Teilor Stone worked as a staff writer at the Village Voice and a freelancer for Newsday, The Wall Street Journal, GQ and Mirabella. To get in touch, contact me through my teilor@nizhtimes.com 1-800-268-7116
Previous ArticleGalt's expropriated buildings will have cost $ 4.7 million
Next ArticleTwo men hit a tree with their vehicle