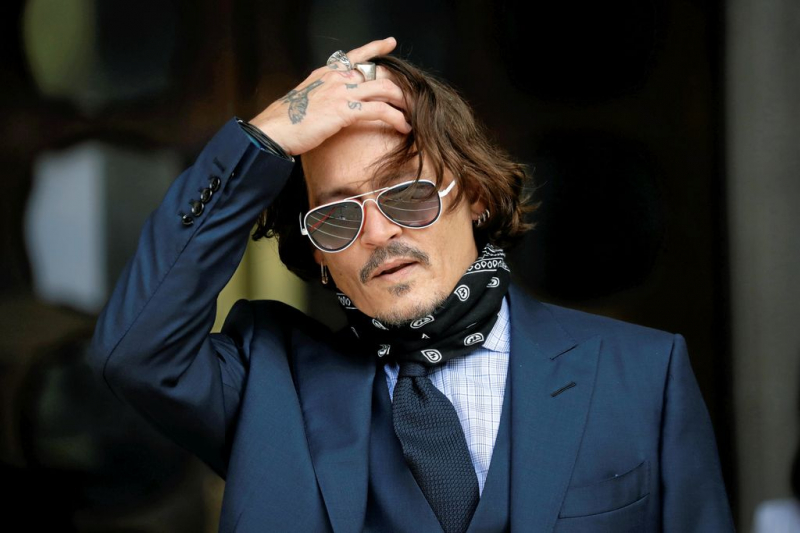 Johnny Depp when he arrived at court on July 14. The actor lost his libel lawsuit against British tabloid The Sun on Monday.

Judge Andrew Nicol's ruling is a blow to the reputation of the actor of Edward in the Silver Hands and Pirate of the Caribbean . After 35 years of career, the latter had taken big risks by attacking News Group Newspapers (NGN), publisher of the daily newspaper which described him as a “batter of women”.

The three-week trial in July at the High Court in London, often in the presence of the 57-year-old comedian and his ex-wife Amber Heard (and their respective fans), resulted in a spill of gloomy revelations about their private life.

Drug addiction, accusations of deception and even excrement found in the marital bed were discussed, fueling the tabloids.

Relying mainly on the statements of the actress, the Sun had invoked 14 episodes of violence, all disputed by Johnny Depp.

Judge Nicol ruled in his judgment that the Sun's qualifications were “substantially true” because “the vast majority of the alleged assaults have been proven.”

“Victims of domestic violence should never have to be silent,” responded a spokesperson for the Sun , thanking the judge and the actress “for his courage to testify in court.”

“This decision and this judgment are not a surprise”, reacted the lawyers of the actress of 34 years, who had the status of witness at the trial, saying to want “to obtain justice” in another procedure underway in the United States. .

Johnny Depp's lawyers have denounced a decision “as perverse as disconcerting”, and indicated that it “would be ridiculous that Mr. Depp does not appeal” in the face of a judgment that has “so many flaws”.

Johnny Depp and Amber Heard met on the set of Rum Express in 2011, before tying the knot in February 2015 in Los Angeles, California.

The couple had divorced with a bang in early 2017. The actress of Danish Girl and Aquaman then spoke of “years” of “physical and psychological” violence, accusations strongly rejected by Johnny Depp.

During the trial, the lawyer for the daily, Sasha Wass, had crushed the excesses of the actor, “subject to irrational mood swings” when he drank and consumed narcotics.

The American actor has admitted abuse of drugs and alcohol, but claims to have never raised a hand on a woman, supported on this point by the written testimonies of his ex-companions Vanessa Paradis and Winona Ryder, the singer Frenchwoman describing him as “a kind, attentive, generous and non-violent man and father”.

Johnny Depp accused Amber Heard of violence in return. His lawyer has methodically pointed out flaws and modifications in Amber Heard's statements, to discredit the whole story of what he described as a “compulsive liar”.

“One of the recurring themes in Mr. Depp's testimony was that Ms. Heard had mounted a blow” against him and had accumulated evidence “like insurance” to extract money from him, Judge Nicol said. “I do not accept this characterization of Mrs. Heard.”

For lawyer Mark Stephens, specialized in reputation management, this decision will do “immensely damage” to the reputation of the actor, while “it is something that could have been treated discreetly, away from the spotlight.”

From now on, “the only way for (Mr. Depp) to recover from this is to admit his problems and to seek treatment”, according to the expert, questioned by the British press agency PA.

Teilor Stone has been a reporter on the news desk since 2013. Before that she wrote about young adolescence and family dynamics for Styles and was the legal affairs correspondent for the Metro desk. Before joining The Bobr Times, Teilor Stone worked as a staff writer at the Village Voice and a freelancer for Newsday, The Wall Street Journal, GQ and Mirabella. To get in touch, contact me through my teilor@nizhtimes.com 1-800-268-7116
Previous ArticleLouis-José, biting and efficient
Next ArticleSerge Joncour wins the Femina award