Edmundson pleasantly surprised to have been traded to Canadiens 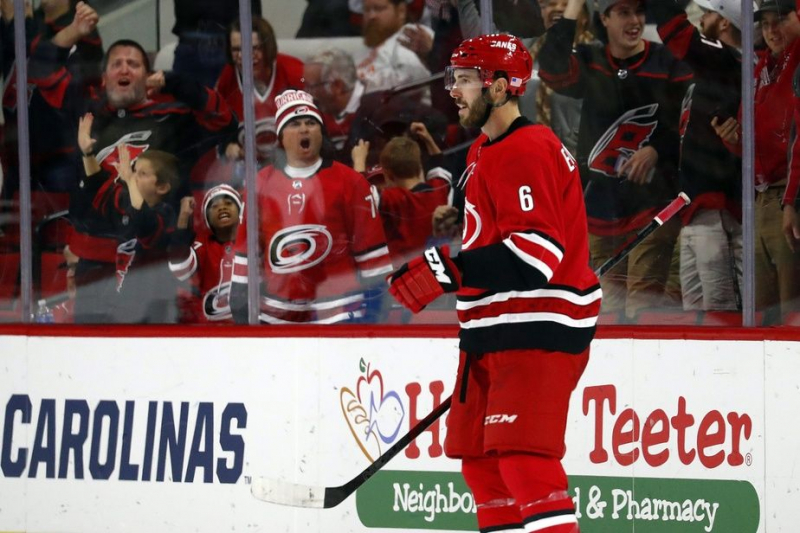 Share September 17, 2020 3:31 p.m. Share Edmundson pleasantly surprised to have been traded to Canadian Alexandre Geoffrion-McInnis The Canadian Press MONTREAL – Defenseman Joel Edmundson admitted he was surprised to learn he had been traded to the Montreal Canadiens , as he prepared to test the free agent market.

The Canadian acquired Edmundson from the Carolina Hurricanes last weekend, ceding in return a fifth-round pick in 2020 (139th overall). A native of Brandon, Man., Edmundson could have become an unrestricted free agent on October 9.

But the interest that the Habs took in him quickly convinced him that he had to continue his career with the Bleu-blanc-rouge.

“Yes, absolutely (I was very surprised by the transaction), he admitted on a conference call Thursday. My goal was to test the free agent market and see which clubs would be interested in my services, but after the transaction I realized that he (the Canadiens) wanted to have me with him. I took a week to think about it, and I thought it would take the stress out of testing the market. I couldn't be happier to be in Montreal. ”

Edmundson, who won the Stanley Cup with the St. Louis Blues in 2018-19, made no secret that he liked how Canadiens general manager Marc Bergevin sang the apple to him during their brief discussion after the transaction.

“He (Bergevin) told me that I could play with (Jeff) Petry, behind the first pair formed of (Shea) Weber and (Ben) Chiarot. If everything goes as planned, I could not be more excited for the next season, ”he said, adding that he can play on both sides in defense.

He therefore accepted Bergevin's four-season contract offer with an average annual value of US $ 3.5 million. In addition to receiving the same salary as Chiarot – “a coincidence”, according to Edmundson -, the principal concerned recalled that he had affinities with the French-speaking market.

“The family on my father's side is francophone – you know, I sometimes hear my grandmother discussing in French on the phone – and I spent nine years in a French immersion school,” he said. . It's been a long time since I have practiced, but I will definitely try to remove the rust so that I can discuss in French with my grandmother ”, he said, specifying that his family lived the Francophone community of Saint-Lazare, Manitoba.

“I know Weber, I know 'Pricer', buddy Jake Allen, so it's good to know some faces in the locker room already. Some of them have already contacted me to welcome me. I'll be able to count on the best goalie in the world behind me, and it's little details like that that make me happy to join this team, ”said Edmundson, who played 68 games last season with the Hurricanes, scoring seven goals and 20 points.

The six-foot-four, 216-pound athlete, who has served 72 penalty minutes this season, said he particularly appreciates the way the CH is built, which he says looks a lot like the 2018-19 Blues.

“We were playing very physically, while being very fast. Our goal was to exhaust the other team, and that's how we were successful, Edmundson said of the Blues. It's similar with the Canadian; It's a young team, and very fast, and if you add Shea (Weber), (Ben) Chiarot and (Jeff) Petry, who are big and mobile, I like how this team is built. ”

In addition, Edmundson did not hide that his conquest of the Stanley Cup had transformed him, as a player. And that his new assets could help the cause of the Canadiens.

“It gives you more confidence, and when the euphoria eventually wears off, you just want to get that kind of feeling back,” the main person explained. I want to give it my all and win another one (Stanley Cup). This feeling is so special, and I hope I will be able to achieve it in Montreal, ”he said.

“We have a good team, which will continue to improve, so I hope we can bring it back to Montreal, the 25th (Stanley Cup),” concluded Edmundson, who amassed 72 points, including 20 goals, in 337 career regular-season games with the Blues and Hurricanes. He also has 15 points (six goals, nine assists) in 53 NHL playoff games.

Teilor Stone has been a reporter on the news desk since 2013. Before that she wrote about young adolescence and family dynamics for Styles and was the legal affairs correspondent for the Metro desk. Before joining The Bobr Times, Teilor Stone worked as a staff writer at the Village Voice and a freelancer for Newsday, The Wall Street Journal, GQ and Mirabella. To get in touch, contact me through my teilor@nizhtimes.com 1-800-268-7116
Previous ArticleThe Canadiens agree for four seasons with Joel Edmundson
Next ArticleChristophe Rondeau, the surprise of the camp