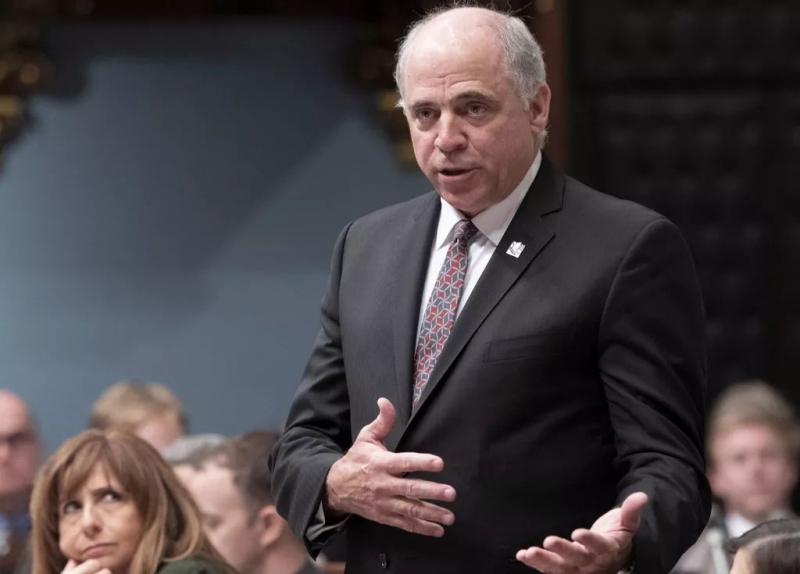 Minister of the Economy Pierre Fitzgibbon

Share October 29, 2020 3:15 p.m. Updated at 4:00 p.m. Share Ethics Commissioner recommends sanction against Minister Fitzgibbon Caroline Plante The Canadian Press The Minister of the Economy, Pierre Fitzgibbon, violated the Code of Ethics and Professional Conduct of the National Assembly and must be reprimanded, concludes the ethics commissioner, Ariane Mignolet.

Fully endorsing the commissioner's report on Thursday, Prime Minister François Legault suggested to his deputies to vote in favor of a reprimand, deeming that Mr. Fitzgibbon should have been more careful in his meetings with a lobbyist friend.

“He should not have met his friend, reacted Mr. Legault. Even if his friend had good plans for Quebec, it is quite obvious that it is easier for a friend to meet a minister than someone who is not a friend. There is a problem of equity. ”

Commissioner Mignolet accuses Mr. Fitzgibbon of having placed himself in a situation where his personal interest could influence his independence of judgment in the exercise of his office, because of his close links with Luc Laperrière.

“The fact that a lobbyist, bound by a great relationship of friendship with a member of the Executive Council, and who agrees to buy him shares of a company as a service to him, can communicate directly with him in order to organizing professional meetings harms the maintenance of the population's confidence in (…) democratic institutions, ”she wrote.

“When you occupy a position like that of minister, it is essential to clearly draw the line between your personal and professional relations. In light of the above, I recommend that a reprimand be imposed on the Minister. ”

In her report, Ms. Mignolet notes that Minister Fitzgibbon maintains that he has not committed any breach of the code. “I do not denote any real desire to amend,” she adds, which contributed to her decision to recommend a sanction.

At a press conference at the National Assembly on Thursday, Pierre Fitzgibbon half-heartedly acknowledged “perhaps imprudence”. However, he believes that he has not “lacked judgment”.

“In no case, and on no file, has my independence of judgment been compromised in any way, and at no time have I favored the personal interests of anyone, including my own,” he said. he said in front of reporters.

Highlighting Mr. Fitzgibbon's inexperience in politics, Mr. Legault said he was ready to pass in the towel. “He had his lesson. (…) The fact that you are talking about it in the media, I think it's the worst reprimand we can wish to have. “

In English, he still admitted that he was “furious” reading the report of the Ethics Commissioner Wednesday evening.

Mr. Fitzgibbon's fault is not “trivial”, says MP Vincent Marissal, from Quebec solidaire (QS). “It is extremely rare in our place that a minister is blamed to this point.

“Our guard dogs (…) don't stick their teeth out for nothing. (The commissioner) has just taken a nasty bite in the minister's calf. It's called: “Take a seat and follow the rules of ethics.”

Ms. Mignolet's investigation began in 2019. It concerned the holding of interests by the Minister in certain companies and sought to determine whether he had complied with the rules relating to conflicts of interest and the declaration of interests.

The commissioner first received a request for an investigation from the Parti Québécois, then another from QS concerning the appointment of Guy LeBlanc, a friend of Mr. Fitzgibbon, as president and CEO of Investissement Québec.

Ms. Mignolet considers, however, that the Minister did not violate the code of ethics by appointing Mr. LeBlanc.

On the day of Mr. LeBlanc's appointment, Prime Minister Legault said he wanted to change the rules on conflicts of interest of his ministers, drawing sharp criticism from the opposition.

Mr. Legault wanted to increase the 60-day period granted to a minister to divest himself of his interests in a company or entrust them, for example, to a trust.

Teilor Stone has been a reporter on the news desk since 2013. Before that she wrote about young adolescence and family dynamics for Styles and was the legal affairs correspondent for the Metro desk. Before joining The Bobr Times, Teilor Stone worked as a staff writer at the Village Voice and a freelancer for Newsday, The Wall Street Journal, GQ and Mirabella. To get in touch, contact me through my teilor@nizhtimes.com 1-800-268-7116
Previous ArticleQuebec will fall back into recession by the end of the year, according to Leitao
Next ArticleGift from WE Charity: Morneau did not act badly, concludes the ethics commissioner