Ethics Committee: “procedural nonsense” after a mistake by the Bloc 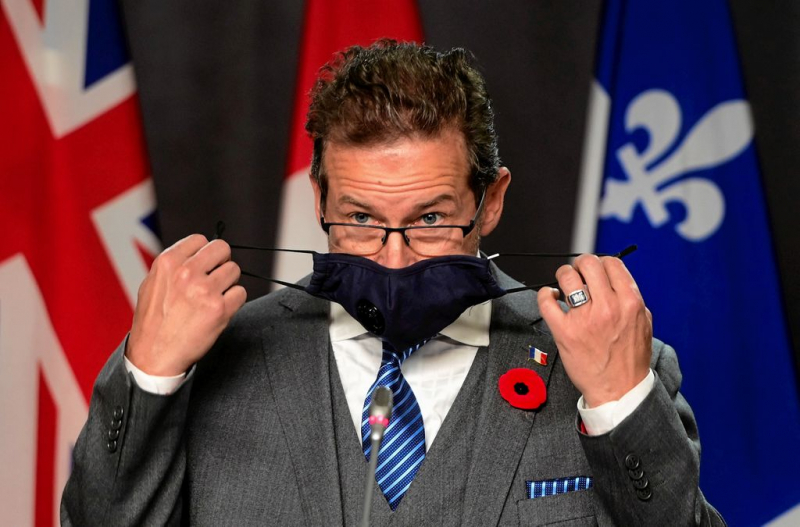 Share November 2, 2020 3:28 p.m. Updated at 6:47 p.m. Share Ethics committee: “procedural nonsense” after an error by the Bloc Catherine Lévesque The Canadian Press OTTAWA – A conflict between the Bloc Quebecois and the New Democratic Party has given rise to “Procedural nonsense” in committee.

On Monday, the Bloc attempted to correct its mistake last week by tabling a new motion in the parliamentary ethics committee that would have obtained documents relating to the honoraria of Prime Minister Justin Trudeau and his wife Sophie Grégoire for lectures given in the last 12 years.

A similar motion to obtain documents related to the organization UNIS (WE Charity) was defeated by the Bloc Québécois Julie Vignola, who replaced her colleague Marie-Hélène Gaudreau for a vote last Monday. Bloc parliamentary leader Alain Therrien argued that it was a “mistake” because of a translation problem.

New Democrat Charlie Angus did not believe the Bloc's version. He therefore abstained from voting for the new Bloc motion on Monday, which was defeated to the chagrin of the Conservatives and Ms. Gaudreau.

“If a party votes a certain way and suffers political wrath as a result of that vote, it cannot then come back and insist that we do it again,” Angus said to justify his position. “And I say it with the greatest respect, I have been in Parliament for 16 years and I have never seen a motion defeated by a party taken up at the next meeting,” he added.

Ms. Gaudreau replied that she had wanted to make amends by tabling a new, slightly modified motion.

“As it is difficult to change things, we did our research, (…) we tabled a motion which, for all intents and purposes, is admissible and somewhat different. There, what I understand is that maybe there are some who have changed their mind during the weekend or precisely because it does not come from them ”, she was surprised. .

Mr. Angus subsequently tabled his own motion to conduct a study of government contracts and programs awarded during the pandemic.

The Bloc and the NDP at loggerheads

The Bloc therefore tried its luck, once again, to try to introduce elements of its Monday motion in order to obtain, once and for all, the documents on the fees of Mr. Trudeau and Ms. Grégoire for public appearances. Mr. Angus initially opposed it, before reluctantly agreeing to add it to his motion, with a barely audible “yes”.

“It's ridiculous that the Bloc is saying that it had not heard a vote that we had debated for 17 hours, but a lot of water has flowed under the bridges since then,” he said, trying to turn the page on this case.

The committee will have to vote on Mr. Angus' motion, as amended, at the next meeting on Tuesday.

Bloc leader Yves-François Blanchet did not seem impressed by the turn of events in the committee.

Let us recall that last week, Mr. Blanchet revealed that the bridges were cut between the Bloc and the NDP.

“We do not speak to them because some recent events confirm to us that, until otherwise noted, they are not worthy of communication between adults,” he said at a press conference last Wednesday. .

“It ranges from ignoble accusations against Alain Therrien to comments by their leader to recent interventions that we do not support. We have no contact with the New Democratic Party and, my faith, we are doing very well, ”added Mr. Blanchet.

A similar motion to obtain documents related to the organization UNIS (WE Charity) was defeated by the Bloc Quebecois Julie Vignola, who had replaced her colleague Marie-Hélène Gaudreau for the time of a vote. Bloc parliamentary leader Alain Therrien argued that it was a “mistake” because of a translation problem.

New Democrat Charlie Angus did not believe the Bloc's version. He therefore defeated the new motion introduced by the party on Monday by abstaining from voting.

Mr. Angus subsequently tabled his own motion to conduct a study of several government programs during the pandemic. There, the Bloc was able to add elements of its Monday motion to obtain, once and for all, the documents on the fees of Mr. Trudeau and Ms. Grégoire Trudeau for public appearances.

Last week, Mr. Blanchet revealed that the bridges had been cut between the Bloc and the NDP.

Teilor Stone has been a reporter on the news desk since 2013. Before that she wrote about young adolescence and family dynamics for Styles and was the legal affairs correspondent for the Metro desk. Before joining The Bobr Times, Teilor Stone worked as a staff writer at the Village Voice and a freelancer for Newsday, The Wall Street Journal, GQ and Mirabella. To get in touch, contact me through my teilor@nizhtimes.com 1-800-268-7116
Previous ArticleEthics Committee: the Bloc tries to correct its mistake, the NDP opposes it
Next ArticleMurder in Old Quebec: minute of silence observed by Quebec elected officials