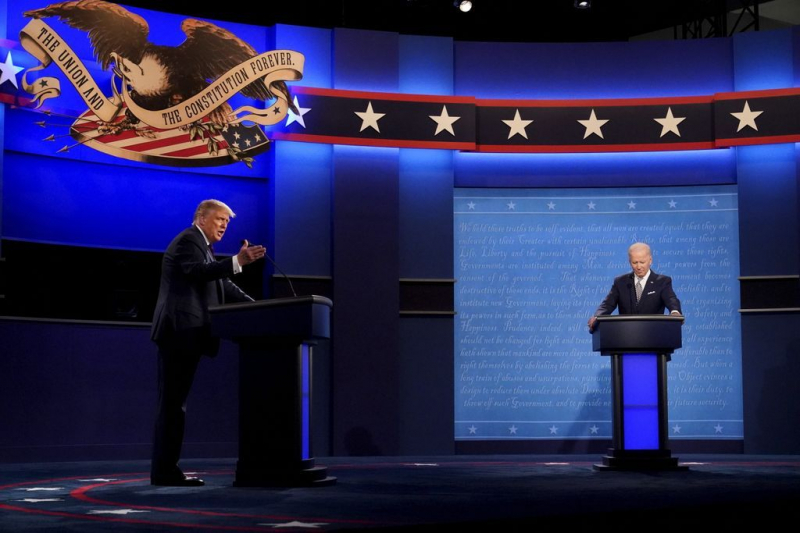 The two US presidential candidates begin their final sprint before the election.

Share November 2, 2020 6:30 a.m. Share Final sprint for Donald Trump and Joe Biden AFP Agence France-Presse WASHINGTON – On the eve of the US presidential election, Donald Trump is throwing all his strength into battle on Monday with the hope of making the polls lie which place his Democratic rival Joe Biden in the position of favorite.

In an America on edge, and in the anxiety-provoking context of a rapidly resurgent coronavirus epidemic, the 74-year-old businessman continues to predict a Republican “wave” despite unfavorable winds.

“We are going to win four more years in our magnificent White House!”, Launched Sunday the one who fears to be the first president not to be reelected for a second mandate for more than a quarter of a century.

On the program for his last day of the campaign: five meetings, in four states – North Carolina, Pennsylvania, Michigan, Wisconsin – with a last act in Grand Rapids (Michigan), as in 2016 where he had, in the home stretch, created a surprise that had stunned the world.

Joe Biden, 77, is focusing mainly on Pennsylvania, which he hopes to swing to finally open – on his third attempt – the doors of the White House.

“Two more days! In two days, we will put an end to this presidency which has divided our country, ”he said on Sunday from Philadelphia.

A month after his Covid-19 infection and countless campaign meetings, the American president shows no signs of fatigue, quite the contrary. He has been traveling the country for over a week, spending very little time in Washington.

During his final meeting on Sunday evening, in Opa-Locka, Florida, he once again felt that Democrats were talking too much about Covid-19, which has killed more than 230,000 in the United States.

And at the mention of the immunologist Anthony Fauci, who expressed reservations on the government strategy, the crowd began to chant “Virez Fauci!”

“Let me wait a bit after the election”, replied, amused, the American president, evoking the possible dismissal of this researcher very respected in the United States and around the world.

A sign of the tension that reigns at the end of a campaign of incredible aggressiveness, businesses in several American cities, including New York and the capital Washington, were barricaded for fear of violent demonstrations.

Asked about speculation in the media about the possibility of him declaring himself the winner on Tuesday night if the results are undecided, Donald Trump categorically denied. “No, no, that's false information,” he said when he descended from Air Force One in North Carolina.

“As soon as the election is over, our lawyers will be ready,” he however took care to add, suggesting the possibility of a long legal battle.

“My answer is that the president is not going to steal this election,” said Joe Biden.

According to the New York Times, Donald Trump intends to organize an election night in the living rooms of the White House and would consider hosting up to 400 guests.

Joe Biden will speak to the nation from his stronghold of Wilmington, Delaware.

The polls put the Democrat ahead.

A New York Times and Siena College opinion poll published on Sunday places him ahead of Donald Trump in four decisive states, all won by the Republican in 2016: Pennsylvania, Arizona, Florida and Wisconsin.

But observers repeat their calls for caution, pointing to the 2016 election, where Donald Trump created one of the biggest surprises in American political history, by defeating Hillary Clinton.

The atmosphere of election night will largely depend on the order in which key states switch to one side or the other.

A victory for Joe Biden in Florida, where results could be announced soon enough, could quickly end the suspense of election night. The two septuagenarian candidates are neck and neck in this great state of the Southeast.

Singularity of the American system: it is the large voters, and not the popular vote, who make the election. In 2016, Donald Trump had garnered nearly three million fewer votes than Hillary Clinton, but won a majority of 538 voters.

More than 93 million Americans have already voted in the presidential election, suggesting a record turnout.

Former President Barack Obama, very present in this home stretch, will travel to Atlanta, Georgia, and Miami, Florida on Monday to support the candidacy of the one who was his vice-president for eight years.

For two weeks, he has called not to repeat the mistakes of 2016.

“A lot of people stayed at home, were lazy and complacent. Not this time! Not in this election. ”

Teilor Stone has been a reporter on the news desk since 2013. Before that she wrote about young adolescence and family dynamics for Styles and was the legal affairs correspondent for the Metro desk. Before joining The Bobr Times, Teilor Stone worked as a staff writer at the Village Voice and a freelancer for Newsday, The Wall Street Journal, GQ and Mirabella. To get in touch, contact me through my teilor@nizhtimes.com 1-800-268-7116
Previous ArticleEdward Snowden asks for Russian nationality, but wants to keep the American
Next ArticleThe two billion trees promised by Trudeau still awaiting funding