France: three dead in an “Islamist” attack on a church 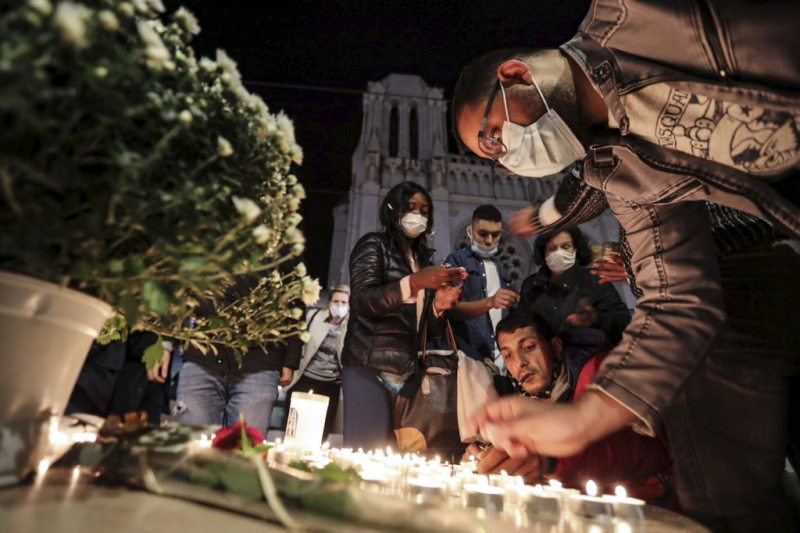 People gather not far from the scene of the attack.

Share October 29, 2020 6:36 am Update at 5:05 pm Share France: three dead in an “Islamist” attack on a church Agence France-Presse NICE —Three people were killed Thursday in a church in Nice (South-East), during an “Islamist terrorist attack” denounced by President Emmanuel Macron, who promised that France “would not give up” on its values.

UN Secretary-General Antonio Guterres condemned a “heinous attack”, while many countries around the world expressed their solidarity with France.

“It is France which is under attack”, launched the head of state, who went to Nice shortly after the attack perpetrated in the Notre-Dame basilica.

A woman and a man were stabbed there by a man who shouted “Allah Akbar” (“God is the greatest”, in Arabic). Another woman, seriously injured, died in a nearby bar where she had taken refuge.

The victims are an elderly lady whom the assailant tried to behead and a mother in her 40s, as well as the sacristan of the church, a layman of around 45, father of two daughters.

The alleged attacker is a 21-year-old Tunisian migrant who arrived in France in early October after passing through the Italian island of Lampedusa, according to sources familiar with the matter.

Tunisia, which strongly condemned the attack, announced the opening of an investigation.

“If we are attacked, it is for the values which are ours, our taste for freedom”, estimated the French head of state in Nice, also evoking a knife attack by a security guard of the French consulate in Jeddah, Saudi Arabia, which occurred simultaneously with that of Nice.

The attack, which the anti-terrorism prosecution seized, pushed France to raise its Vigipirate security plan to the maximum level.

President Macron specified that the number of soldiers patrolling the streets would increase from 3,000 to 7,000, and will have to particularly protect places of worship, around the Catholic holiday of All Saints. 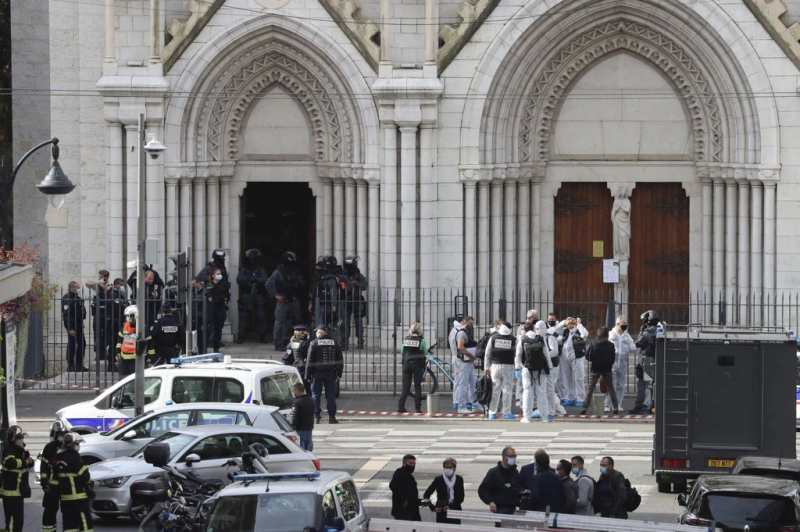 French police and firefighters when they arrived at the scene of the attack on Thursday. AFP, Valery Hache

“We will not give up” on the values that make France, in particular “the freedom to believe and not to believe”, hammered Emmanuel Macron, bringing all “the support of the Nation to the Catholics”, targeted once again after the assassination in 2016 of priest Jacques Hamel in his church in Saint-Etienne-du-Rouvray (West).

The mayor of Nice, Christian Estrosi, underlined that after the assassination of a teacher near his school, “it is in a church that the Islamo-fascist barbarism has chosen to strike, it is quite a symbol” .

Samuel Paty, professor of history and geography, assassinated on October 16, was targeted for showing in class cartoons of the Prophet Muhammad in a course on free speech, by a radicalized Chechen Russian, shot dead shortly thereafter by the police.

Calls for boycott and anti-French demonstrations have multiplied since Emmanuel Macron said, during a tribute last week to this professor, not wanting to give up the right to publish cartoons.

Anti-French protests continued Thursday in Pakistan, Afghanistan, Libya, or the Palestinian Territories, some burning images of Mr. Macron or waving posters caricaturing him as a dog or a pig.

Former Malaysian Prime Minister Mahatir Mohamad, a well-known figure in the region, justified in a tweet, “the anger” of Muslims who, according to him, “have the right to kill millions of French people for the massacres of the past”. Seized by the French government, Twitter deleted this message.

“A message of peace to the Muslim world”

But the Nice attack also sparked a wave of international condemnation.

Putting aside strong tensions in recent days with Paris around the cartoons, Ankara “strongly condemned”, considering that “those who have committed such a savage attack in a sacred place of worship can not be inspired by any religious value , human or moral whatsoever ”.

Pope Francis said “pray for the victims”, while the conference of bishops of France wished that “Christians do not become a target to be killed”.

“We are wholeheartedly with the French. America is alongside our oldest ally in this fight, ”Donald Trump tweeted.

And the leaders of the 27 EU Member States have displayed their “solidarity” with France and calling for “dialogue between communities and religions”.

Before parliament on Thursday, the head of French diplomacy also launched a “message of peace to the Muslim world”, stressing that France is “the country of tolerance”, not “of contempt or rejection”.

Nice has already been bereaved in 2016 by a ram truck attack which left 86 dead on the Promenade des Anglais on July 14, in the middle of the national holiday.

France has suffered since 2015 a wave of attacks the previous year, which left 260 dead.

Teilor Stone has been a reporter on the news desk since 2013. Before that she wrote about young adolescence and family dynamics for Styles and was the legal affairs correspondent for the Metro desk. Before joining The Bobr Times, Teilor Stone worked as a staff writer at the Village Voice and a freelancer for Newsday, The Wall Street Journal, GQ and Mirabella. To get in touch, contact me through my teilor@nizhtimes.com 1-800-268-7116
Previous ArticleA 27-year-old Magogois wanted
Next ArticleA pimp sentenced to two and a half years in prison