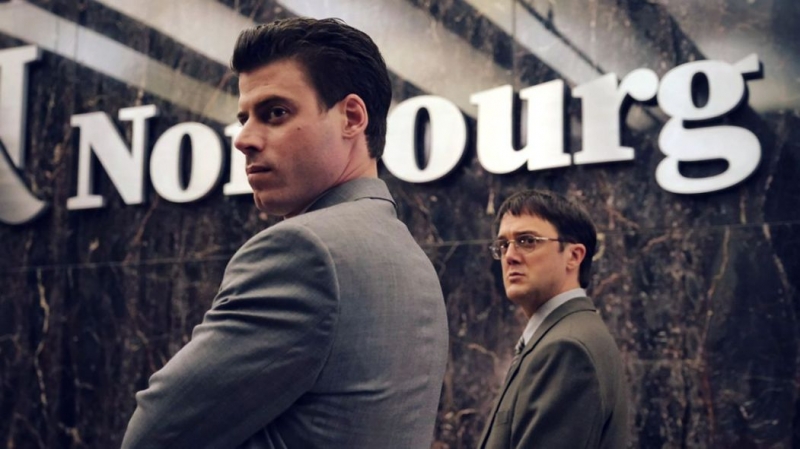 The poster for the film “Norbourg”, by Maxime Giroux

Quebec knows only too well the financial scandal that cheated 9200 investors in the mid-2000s, which necessarily creates a good story on the screen, even if the economic vocabulary of the dialogues will perhaps confuse people to whom money and taxes give hives (works with such intentions are rare here).

However, it remains captivating to see how a single well-supported man (Vincent-Guillaume Otis embodies the auditor Éric Asselin, who will become Lacroix's right arm) was able to build such an empire of scams and lies. Narrated like an American thriller, Norbourg entertains despite the complex ramifications of its subject matter.

In the first minutes of the feature film, we witness, powerless, the announced failure of several innocent and harmless people, who allow themselves to be convinced to deposit their precious savings in this new Norbourg fund apparently full of promises. Real estate? No, it's outdated, go to Norbourg instead… The pens scratch the paper and, already, our heart sinks in anticipation of the inevitable outcome, too well known, which awaits these poor victims.

All along along the screenplay constructed by Simon Lavoie (The deserter,Laurentie, The little girl who loved matches too much), Vincent Lacroix builds his rise, “greases the leg” of brokers with lavish parties and luxurious gifts, multiplies the shenanigans, without however escaping the vigilance of the shrewd investigator Anne-Marie Boisvert (Christine Beaulieu), who finds the computer flaws and the key people always sick at the “right” moment in the Norbourg premises are very suspicious.

From a devastating article in a reputable magazine to another denunciation, the fall of Norbourg will begin gradually… and the party will end, less glorious than when it started.

“I can't wait for the public to discover the film. It is a story that touches us all. Everyone, from 15 to 85, has heard of this story or been touched by it,” said Vincent-Guillaume Otis in an interview with Métro last month, when he was met on the set of District 31 during the last filming of the series.

Teilor Stone has been a reporter on the news desk since 2013. Before that she wrote about young adolescence and family dynamics for Styles and was the legal affairs correspondent for the Metro desk. Before joining The Bobr Times, Teilor Stone worked as a staff writer at the Village Voice and a freelancer for Newsday, The Wall Street Journal, GQ and Mirabella. To get in touch, contact me through my teilor@nizhtimes.com 1-800-268-7116
Previous Article“Chez Padré”: talk, talk, chat, chat with Serge Fiori
Next Article“All Things”: A Touching Celebration of Friendship