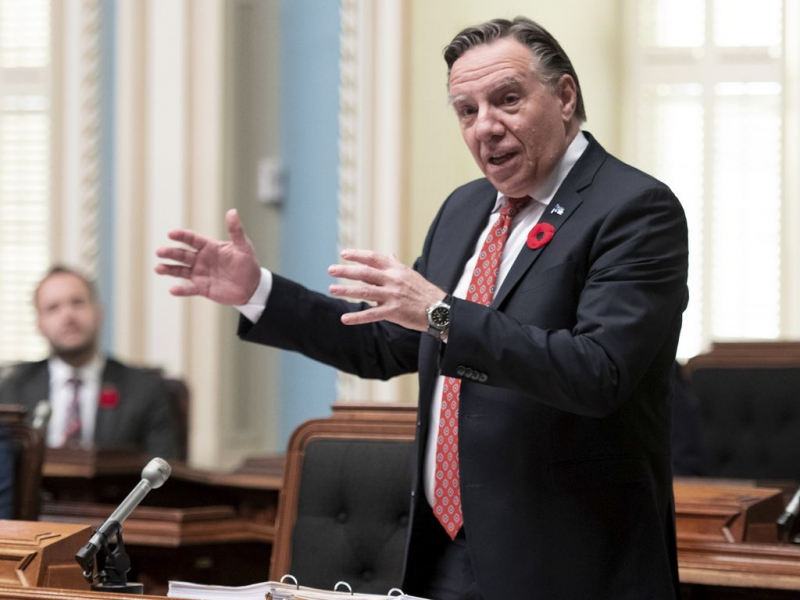 Share November 4, 2020 10:46 am Updated at 1:52 pm Share François Legault wants to continue to “make the relationship between Quebec and the United States prosper” The Canadian Press The planet reacted cautiously on Wednesday to the still uncertain results of the American election. The Premier of Quebec François Legault was among the first to speak on the subject.

Mr. Legault said on Twitter on Wednesday morning that he had read the preliminary results of the US presidential elections and that he would continue to monitor the situation closely, until the final result.

“We will continue to work hard to make our relationship prosper, no matter which president the Americans choose,” he added.

I have read the preliminary results of the US presidential elections.
We will monitor it closely until the final result.
We will continue to work hard to make our relationship prosper, regardless of the president the Americans choose.

In Ottawa, political leaders were also walking on eggshells.

“There is an electoral process underway in the United States and, obviously, like everyone else, we continue to follow it and we will continue to watch carefully what is happening,” said Justin Trudeau upon his arrival Wednesday morning at the parliament.

“We will see the results,” was content to say the Conservative leader Erin O'Toole before rushing into the building where the meeting of his caucus was held. As he left the meeting shortly after noon, he was no more talkative. “We continue to monitor,” he said.

“For the next 24 hours, the Prime Minister of Canada must refrain from putting his finger in the mouse trap. There is a certain caution that is required, ”advised Bloc leader Yves-François Blanchet, at a press briefing on Wednesday morning.

Earlier this week, Mr. Blanchet, like New Democrat leader Jagmeet Singh, did not hesitate to state his preference for the election of Joe Biden. Mr. Blanchet has not changed his opinion, but says he can afford a freedom that the Prime Minister of Canada does not have.

Mr. Singh, Wednesday afternoon, did not hesitate to exercise his freedom either.

“It is true that the United States is divided. I remain hopeful for the result, to get Mr. Trump out, ”the leader of the New Democratic Party (NDP) said at a press briefing.

Mr. Legault had hoped, Tuesday, that there is no uncertainty about the outcome of the vote in the United States, recalling that Quebec business people want to know where they are going.

But the uncertainty is not about to be dispelled, since it was not yet known, Wednesday afternoon, who Donald Trump or Joe Biden would take the way to the White House.

Donald Trump nevertheless proclaimed himself the winner overnight. Joe Biden, for his part, called on voters to be patient and demanded that all ballots be counted.

Teilor Stone has been a reporter on the news desk since 2013. Before that she wrote about young adolescence and family dynamics for Styles and was the legal affairs correspondent for the Metro desk. Before joining The Bobr Times, Teilor Stone worked as a staff writer at the Village Voice and a freelancer for Newsday, The Wall Street Journal, GQ and Mirabella. To get in touch, contact me through my teilor@nizhtimes.com 1-800-268-7116
Previous ArticleFor Trudeau, Macron's phone call is a drop
Next ArticleThe PQ and QS ask the Director of Criminal and Penal Prosecutions to justify her departure [VIDEO]