Gallagher suffers from a broken jaw; Niskanen suspended for a match 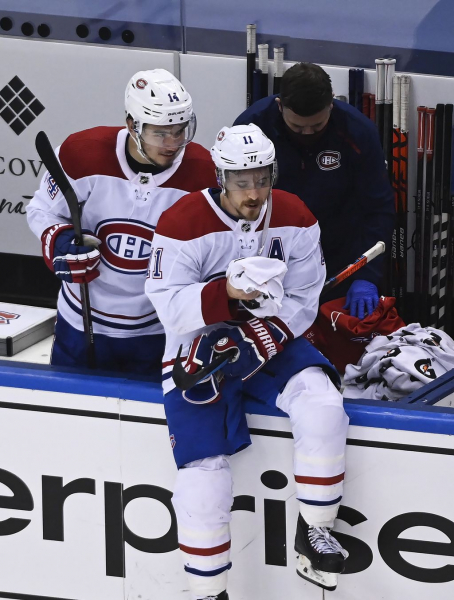 Brendan Gallagher is suffering from a broken jaw and will not be returning to play in this series against the Philadelphia Flyers.

Share August 20, 2020 5:45 pm Updated at 9:22 pm Share Gallagher suffers from a broken jaw; Niskanen suspended for game Alexis Bélanger-Champagne The Canadian Press Montreal Canadiens forward Brendan Gallagher suffered a broken jaw when he was hit in the face by a double check from defenseman Matt Niskanen on Wednesday and will miss the rest of the series against the Philadelphia Flyers since he will have to be operated.

For his part, Niskanen was suspended for a meeting by the Department of Player Safety of the NHL.

The Canadian confirmed the severity of Gallagher's injury early Thursday evening, before hearing the verdict against Niskanen. The team added that Gallagher will be leaving the NHL bubble in Toronto as he will have to go under the knife.

According to NHL protocol, a member of a team wanting to reenter the bubble after leaving it must provide four consecutive negative results from COVID-19 tests carried out over a period of four days. The person may also have to undergo a quarantine of up to 14 days.

Gallagher also reportedly lost at least one tooth when he took Niskanen's hard-hitting blow in the third period of Game 5 of the Eastern Conference quarterfinal series between the Canadiens and the Flyers. The Canadian won the game 5-3 to avoid elimination. The Flyers lead the series 3-2 with Game 6 going on Friday at 7 p.m.

In its explainer video about Niskanen's suspension, the NHL Player Safety Department points out that the Flyers defenseman intended to strike Gallagher's upper body with a hard stick and that the blow caused caused an injury. Niskanen also had a track record, having been fined once in his career.

However, it is also mentioned that Niskanen defended himself by saying he was not aiming for Gallagher's head. The NHL also noted that Gallagher's abrupt movement before impact, as he pivoted on himself, was part of the reason why he was shot in the head.

The Canadiens' interim head coach Kirk Muller said by videoconference Thursday morning that the team had sent video footage of Niskanen's gesture to the NHL for review.

“I think the video explains everything. We will let the league handle the matter, ”Muller said, obviously wishing that Niskanen would be penalized for the blow.

Niskanen was not punished on the streak and Gallagher finished the game even though his mouth was bloody.

Flyers head coach Alain Vigneault came to Niskanen's defense by videoconference before the Habs' announcement about Gallagher's injury and the suspension of his defenseman.

“Gallagher seemed to be correct. He was talking to the referees. He spent the rest of the game talking to our players while he was on the bench, ”said Vigneault.

“Gallagher is a very competitive, hard-working player, but it's not Niskanen's fault that (Gallagher) isn't the greatest. I think it was a hockey game in the heat of the moment and he suffered a slight cut, ”he added.

Gallagher was the Canadiens' spark in Game 5, a day after being limited to four appearances on the ice in the third period in Game 4, when Muller preferred to use other options.

“He's the player who had the biggest impact in the last game,” Muller said. From the first sequence, he demonstrated his character. He works hard, he is the heart and soul of this team. ”

While Vigneault called Niskanen's move a “hockey game,” Muller used the same term when referring to the body checking that led to the ejection of Canadian center Jesperi Kotkaniemi. The latter received a major penalty and game misconduct early in the second period Wednesday for giving back to defenseman Travis Sanheim.

“It's up for debate and we'll let the league make a decision. In our eyes, it was a game of routine. 'KK' wanted to complete his body check. He was punished during the match, ”said Muller.

Kotkaniemi will not receive additional penalties from the NHL Player Safety Department.

In Wednesday's game, Canadiens forward Nick Suzuki also made an unsportsmanlike gesture, slapping Flyers goaltender Carter Hart on the head after he allowed a goal on an angle shot. restricted to Joel Armia in the second period.

Suzuki had admitted his wrongs after the game, saying he had acted recklessly and should not have done so. That didn't stop Flyers forward Kevin Hayes from verbally attacking Suzuki on Thursday.

“It was an immature gesture. I don't know what he was thinking, ”said Hayes.

Asked if this incident could serve as a motivation for the Flyers, Vigneault simply said that it was “very interesting”.

Teilor Stone has been a reporter on the news desk since 2013. Before that she wrote about young adolescence and family dynamics for Styles and was the legal affairs correspondent for the Metro desk. Before joining The Bobr Times, Teilor Stone worked as a staff writer at the Village Voice and a freelancer for Newsday, The Wall Street Journal, GQ and Mirabella. To get in touch, contact me through my teilor@nizhtimes.com 1-800-268-7116
Previous ArticleThe Canadian avoids elimination
Next ArticleYoung Phoenix win over young Voltigeurs