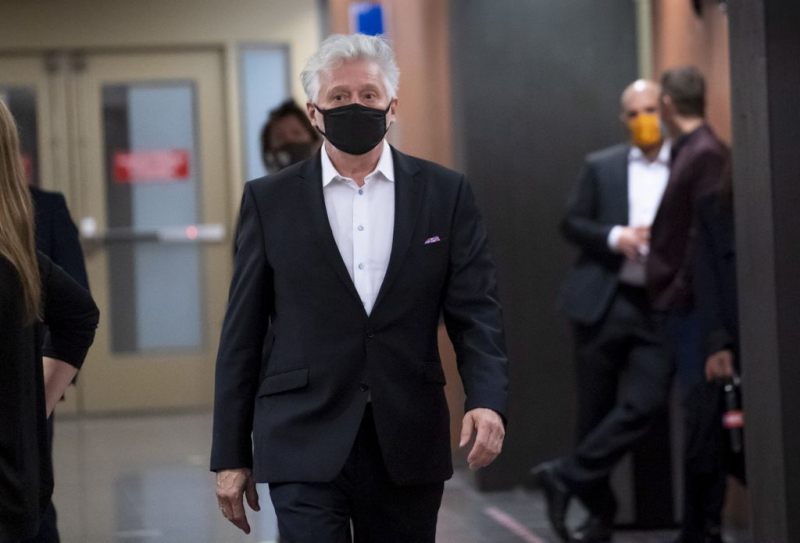 Share November 6, 2020 6:21 am Updated at 11:44 am Share Gilbert Rozon rape trial: his lawyer began pleading Stéphanie Marin The Canadian Press MONTREAL – Gilbert Rozon's lawyer, Me Isabel Schurman, began pleading Friday morning: she tries to convince the judge that he is innocent and did not commit rape.

When he arrived at the Montreal courthouse, the accused was surrounded on the forecourt by a few dozen demonstrators, who notably shouted “in prison!”

A young woman, Coralie Laperrière, present in front of the palace, explained that this trial demonstrates everything that does not work with justice in cases of sexual assault. Like other demonstrators, she calls for a reform of the judicial system.

To enter the room, the founder of Juste pour Rire, Gilbert Rozon, then had to cross a column of women, positioned on two sides of the corridor. Wearing #MeToo masks, they stared at him as he made his way to his criminal trial.

Judge Mélanie Hébert, of the Court of Quebec, will hear the lawyers on Friday present the two versions of the facts offered during the trial.

The Crown prosecutor, Mr. Bruno Ménard, will argue why the accused should be convicted on two counts: rape and indecent assault.

He is accused of having committed these crimes 40 years ago, in a house in the Laurentians, when he was 25 years old.

The accused, who is now 65, has denied any misconduct or crime, suggesting that the complainant's version does not hold water.

She testified on the first day of the trial, which began on October 13. This Friday, she is present in the courtroom.

She recounted how a date with the accused went. At the time, the woman – whose identity is protected by a publication ban – was 20 years old.

After spending some time at a nightclub, the accused offered to “necking” her in his car, the woman said, who said she refused. On the way to drive her home, the man stopped at her secretary's house to pick up documents. Inside, the woman said he threw himself on her to kiss her, putting a hand on her cleavage and then attempted to remove her panties. She struggled and pushed him back to stop. Saying that she had no other options to go home, and judging that he had understood her refusal, she spent the night there, alone, in a room. In the early hours, she woke up because Gilbert Rozon was on top of her, determined to have sex. She didn't want to, she testified, insisting that there was no consent.

The accused delivered another version: he maintains that there was no offer of “necking” in his car, and that he invited the young woman to have a nightcap in a house rented by one of his employees, and to which he had access. After stroking and kissing her, he says he put his hand under her skirt, but stopped everything when she stiffened and said “no”. Annoyed, he went to bed and woke up to see the complainant astride him, “making love” on him.

The trial lasted just over two days. Only three people testified: the complainant, the accused and a co-worker of the complainant at the time this all took place.

Like all the accused, Gilbert Rozon is presumed innocent until proven guilty.

Teilor Stone has been a reporter on the news desk since 2013. Before that she wrote about young adolescence and family dynamics for Styles and was the legal affairs correspondent for the Metro desk. Before joining The Bobr Times, Teilor Stone worked as a staff writer at the Village Voice and a freelancer for Newsday, The Wall Street Journal, GQ and Mirabella. To get in touch, contact me through my teilor@nizhtimes.com 1-800-268-7116
Previous ArticleA new Deputy Director General at the CIUSSS de l'Estrie-CHUS
Next ArticleInstead of prison, a fraudster finds herself in psychiatry