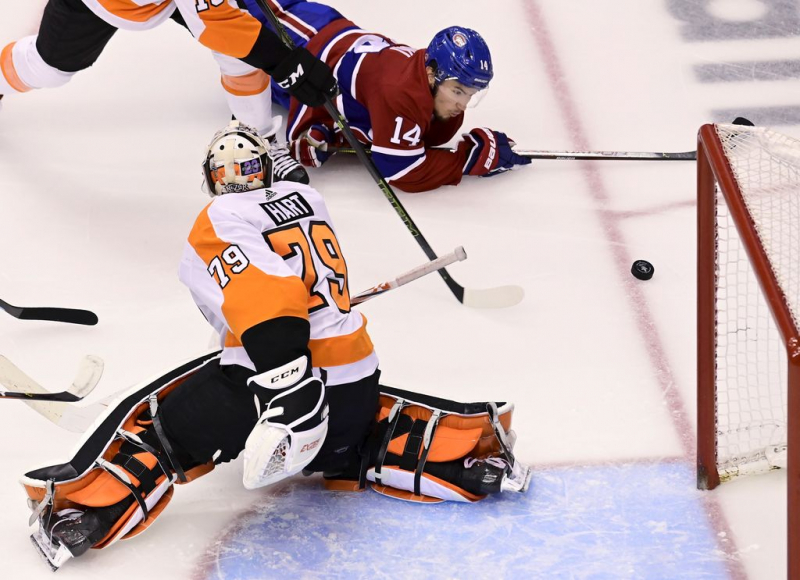 Philadelphia Flyers goaltender Carter Hart turned away 23 shots and helped his team defeat the Montreal Canadiens 1-0 on Sunday in Game 3 of their Eastern Conference quarterfinal series.

Share August 16, 2020 11:08 p.m. Share Hart and Flyers shut out 1-0 Canadian Alexis Bélanger-Champagne La Presse Canadienne Humiliated two days earlier by the Canadiens, the Philadelphia Flyers came together and stifled the Montreal attack on the way to a 1-0 victory on Sunday in Game 3 of their Eastern Conference quarterfinal series.

The Flyers lead the series 2-1. Game 4 will be presented on Tuesday at 3 p.m.

Goalkeeper Carter Hart was kicked out of the net after allowing four goals in just under two periods in the Flyers' 5-0 loss on Friday. He had not been singled out by his head coach Alain Vigneault, who had instead underlined the poor performance of the 18 players in front of him.

This time, Hart was intractable in stopping all 23 shots aimed at him and he also benefited from a better effort from his teammates. Hart also played luck a few times, as the Canadiens hit the posts behind him five times.

Jakub Voracek scored the only goal of the game early in the first period.

“Sometimes the players work hard to give nothing to the opponent and you have to fight for every inch available on the ice,” said Vigneault. We scored early. Carter made some big saves and we were able to win. ”

Carey Price, who was celebrating his 33rd birthday, made 19 saves.

The Habs were not able to play with the same energy as on Friday, when he was on his first outing in the absence of his head coach Claude Julien. The latter is resting at his home in Montreal, after having a stent graft in a coronary artery on Thursday.

“We didn't have as much speed in the center as in the previous match. We were more often stuck along the ramp, ”said the Canadiens' interim head coach Kirk Muller.

“The effort was there. It was a playoff game. Both goalies have been good and the two teams haven't conceded much, he added. No one gave up. If a shot that hit the post had gone into the net, the result could have been different. “

On the Flyers' side, forward Michael Raffl and defender Robert Hagg were included in the lineup in place of Joel Farabee and Shayne Gostisbehere.

The Flyers took advantage of one of their first scoring opportunities, opening the scoring after 5:21 of play. Voracek deftly deflected a Claude Giroux shot over Price's left shoulder and into the goal.

For his part, the Canadian defeated Hart's vigilance twice in the same streak in the first period, but the disc reached the posts each time without crossing the goal line on shots from Jesperi Kotkaniemi and Brett Kulak.

The Flyers experienced the same frustration during a power play. Travis Konecny hit the crossbar, as Price was blinded by Voracek.

The Canadian had three power-play advantages in the second period, but Hart closed the door on the Habs only two good shots from Brendan Gallagher and Nick Suzuki.

Hart was lucky again with just over six minutes left in the second period, when Suzuki hit the post in a two-on-one shorthanded attack.

The Flyers goaltender was more alert at the expense of Jonathan Drouin with less than four minutes to go on the throw-off. He stretched the right pad to make the save, moments after Drouin intercepted a pass from Scott Laughton to the Flyers' blue line.

The Canadian had only taken 13 shots on goal after 40 minutes of play thanks to the Flyers' best work in forecheck and transition.

After Kotkaniemi hit the post for a second time in the game early in the third period, the Canadiens were unable to settle into the attacking zone for long periods and apply pressure to the Flyers' defense.

Price was replaced by an additional striker with around two minutes to go. Hart put the finishing touches on his shutout by frustrating Kotkaniemi at close range.

Phillip Danault believes the victory could have belonged to the Canadian:

“(The Flyers) played well defensively, but our team is at another level. Of course they gave us less space, but it could have gone one way or the other. We also got chances to score. ”

“Their goalie played well. I take my hat off. I think we did all the right things to win a hockey game. ”

Brendan Gallagher admitted to being frustrated, he who has not scored in seven outings since the start of the raise:

“It's frustrating because the guys are working hard and I want to contribute too. I am put in a position where I have to produce. It's part of my role. I can say all the right things and put myself in the right places, but I want real results. ”

Teilor Stone has been a reporter on the news desk since 2013. Before that she wrote about young adolescence and family dynamics for Styles and was the legal affairs correspondent for the Metro desk. Before joining The Bobr Times, Teilor Stone worked as a staff writer at the Village Voice and a freelancer for Newsday, The Wall Street Journal, GQ and Mirabella. To get in touch, contact me through my teilor@nizhtimes.com 1-800-268-7116
Previous ArticleThe Flyers are a source of inspiration too, following Lindblom's return
Next ArticleThe Canadian will have to restart his attack to support Price