Hoteliers protest for jobs and help for industry

By Teilor Stoneon November 10, 2020in Business 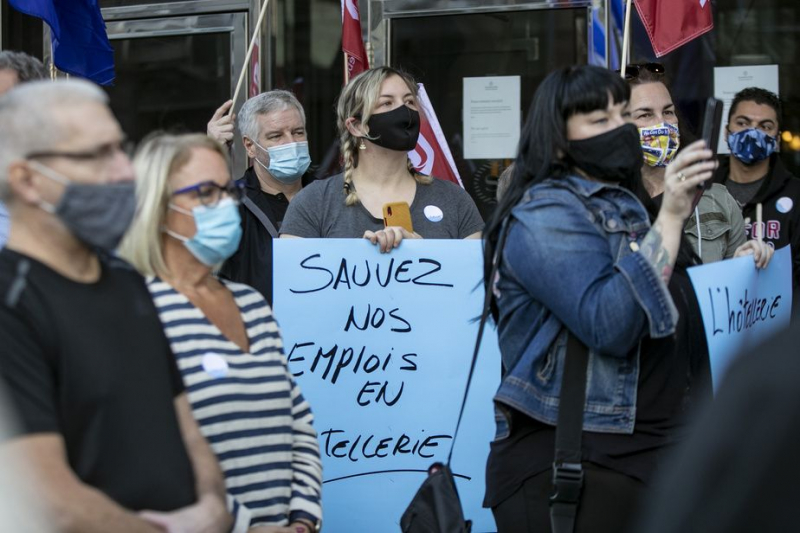 Share November 10, 2020 3:14 p.m. Share Hoteliers protest for their jobs and help the industry Lia Lévesque The Canadian Press MONTREAL – Nearly 200 FTQ union members in the hotel industry demonstrated on Tuesday noon in Montreal to preserve their jobs and demand that help be given to this industry, which has been seriously affected by the coronavirus pandemic.

The FTQ represents approximately 10,000 union members in hotels across Quebec, through five of its major affiliated unions.

These workers, members of the United Steelworkers, Unifor, United Food and Commercial Workers (TUAC), Teamsters and Union of Service Employees (UES-800), demand a real recovery plan of the hospitality industry. They fear that a real recovery in this industry will take some time.

“Currently, we are looking at the future and we say to ourselves: 'it will be super long'. There are people who even say that this sector of hospitality, tourism, catering, will have it for a year, a year and a half, even two years, before it returns to a certain normal. So, it's really worrying for people, ”said Denis Bolduc, secretary general of the FTQ, in an interview.

The demonstrators want training and development programs to be implemented for workers in the hotel industry. There are training programs, but they need to be adapted, Bolduc believes.

The number two of the FTQ also pleads for employment retention programs, so that the industry does not find itself deserted by its workers, when there is indeed a recovery.

Hospitality workers were affected by the Canadian Emergency Benefit (ECP) early in the pandemic. They then migrated to employment insurance. However, “there is an end to that”, argues Mr. Bolduc. We must therefore act now, he believes.

Mr. Bolduc addresses his requests to both levels of government, both Quebec and Canada.

“People have been patient so far. They didn't make a lot of noise. We hope that they will have a listening ear on the part of the governments, ”he added.

“In the hotel industry, people suffer a lot and for a long time. There is a lot of worry. You can't see the light at the end of the tunnel. People have been losing their jobs for several months, ”lamented the secretary general of the FTQ.

The FTQ represents more than 600,000 workers across Quebec.

Teilor Stone has been a reporter on the news desk since 2013. Before that she wrote about young adolescence and family dynamics for Styles and was the legal affairs correspondent for the Metro desk. Before joining The Bobr Times, Teilor Stone worked as a staff writer at the Village Voice and a freelancer for Newsday, The Wall Street Journal, GQ and Mirabella. To get in touch, contact me through my teilor@nizhtimes.com 1-800-268-7116
Previous ArticleAssistance programs: Quebec creates a one-stop shop for entrepreneurs
Next ArticleDemoralization, anxiety and resilience among traders