In the absence of Claude Julien, the Canadian overthrows the Flyers 5-0 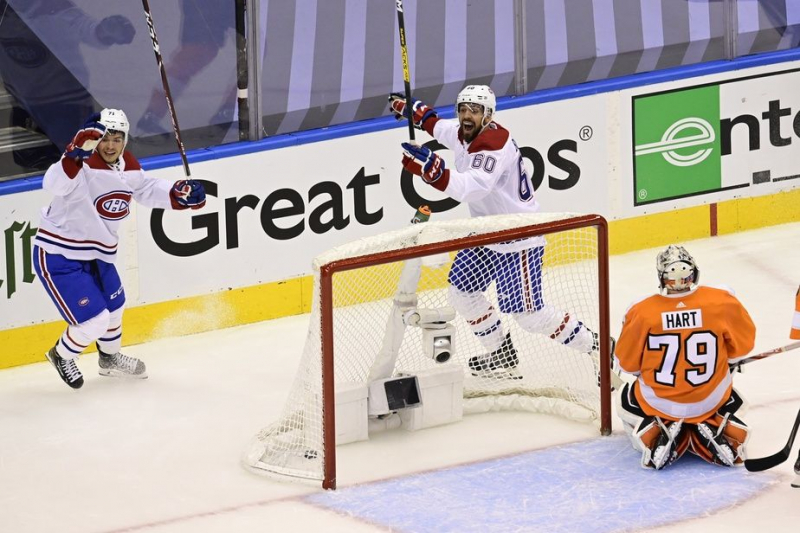 Jake Evans (71) and Alex Belzile (60) after the goal of their teammate Joel Armia.

Share August 14, 2020 5:43 pm Update at 8:36 pm Share In the absence of Claude Julien, the Canadian overthrows the Flyers 5-0 Alexis Bélanger-Champagne The Canadian Press Always as emotional as during his playing career, Kirk Muller had a message for Claude Julien after the resounding 5-0 victory of the Montreal Canadiens against the Philadelphia Flyers on Friday.

“Claude, this victory is for you and your family,” said Muller, who has inherited the responsibilities of head coach of the Habs on an interim basis.

Julien was due to return home to Montreal on Friday, a day after he had a stent graft placed in a coronary artery to relieve him of chest pain. He must have been smiling broadly as he watched his troops in action.

“I was able to look at my phone after the game and (Julien) was one of the first to leave a message to congratulate us on this victory,” said Muller.

The Canadian was imperial and tied his Eastern Conference quarter-final series against the Flyers with one victory per side. Game 3 will be presented on Sunday at 8 p.m.

Tomas Tatar set the tone for the game by scoring the first of his two goals in the game after just over a minute of play. Jesperi Kotkaniemi also managed a brace, while Joel Armia also scored a goal. Max Domi had three assists and Victor Mete, two.

The Flyers have never been able to stop the momentum of the Canadian. And when they knocked on the door, Carey Price made sure not to let them open it.

Price was tough, making 30 saves to get his second shutout since the start of the NHL stimulus tournament.

At the other end of the ice, Carter Hart allowed four goals on 26 shots, before giving way to Brian Elliott late in the second period. Elliott allowed one goal on six shots.

“We got our asses kicked at every level of the game today,” said Flyers head coach Alain Vigneault.

Jake Evans was back in the lineup for the Canadiens, he who had been absent since he suffered a hard body check from Brandon Tanev in Game 3 of the qualifying series against the Pittsburgh Penguins. Dale Weise was left out by Muller.

Domi played on the right wing with Kotkaniemi and Jonathan Drouin, while Armia played on the fourth unit with Evans and Alex Belzile.

Muller admitted with some embarrassment that it was he who made these decisions just before the start of the game, following his instincts.

After the game, Canadian defenseman Shea Weber picked up the puck from a referee. The players made available to the media did not seem to be aware of their captain's gesture. Asked if he received the puck, Muller, for whom it was his first playoff victory as a NHL head coach, showed humility.

“After the game, I leave the locker room to the players. I haven't seen them yet. But I'm sure the puck is for Claude, ”he insisted.

Travis Konecny did not finish the game for the Flyers, with a leg injury in the third period after being hit by a Ben Chiarot throw.

The Canadian came out of the blocks strong and took advantage of one of his first opportunities to open the scoring after 62 seconds of play. Tatar took advantage of a return to the slot to shoot in the opening.

While the Flyers still had no shot on goal, the Canadian widened the lead at 12:36. Kotkaniemi in turn took advantage of a return to net to beat Hart.

The Flyers were finally credited with a first shot on goal after 4:24 p.m. of play. Moments later, Price was brilliant in front of Sean Couturier, stopping his shot on reception from the box.

Benefiting from a power play on the return from the first intermission, the Canadian added a third goal. Tatar went there with a precise wrist shot, which deflected over the post to Hart's left before crossing the goal line.

The Flyers couldn't have hoped for a better opportunity to come back into the game than when they got 1:38 of play on the two-man power play. Price, however, turned back all four of the Flyers' shots on goal during the streak.

The Canadian ended Hart's workday with 2:03 to go. Armia's throw-in to the net deflected onto Shayne Gostisbehere's right skate before finishing her way into the goal.

The Flyers didn't really try to go for a final push in the third period. The Canadian took the opportunity to add a second power-play goal, courtesy of Kotkaniemi at 10:35.

“Whenever a team member is away from the hospital because of a health problem, you think of them. Claude rules the ship. He guides us in our work. We wish him a speedy recovery and wanted to play the best we can for him. ”

Jonathan Drouin believes that the Canadian's speed has unsettled the Flyers:

“When we are on the puck or around the puck, we cause problems for the opponent. Defenders don't like being under so much pressure. We are causing reversals. If we can keep playing that way during the series, we're going to be in a good position. ”

Tomas Tatar was happy to finally score his first goal since the restart:

“I felt more and more tense one game after another. I'm glad I found the back of the net. The whole team played with intensity from the start and the victory is really a result of the collective effort. ”

Teilor Stone has been a reporter on the news desk since 2013. Before that she wrote about young adolescence and family dynamics for Styles and was the legal affairs correspondent for the Metro desk. Before joining The Bobr Times, Teilor Stone worked as a staff writer at the Village Voice and a freelancer for Newsday, The Wall Street Journal, GQ and Mirabella. To get in touch, contact me through my teilor@nizhtimes.com 1-800-268-7116
Previous ArticleJulien had a stent inserted in a coronary artery
Next ArticleStéphane Julien back with Team Canada