In the eye of Christine Beaulieu 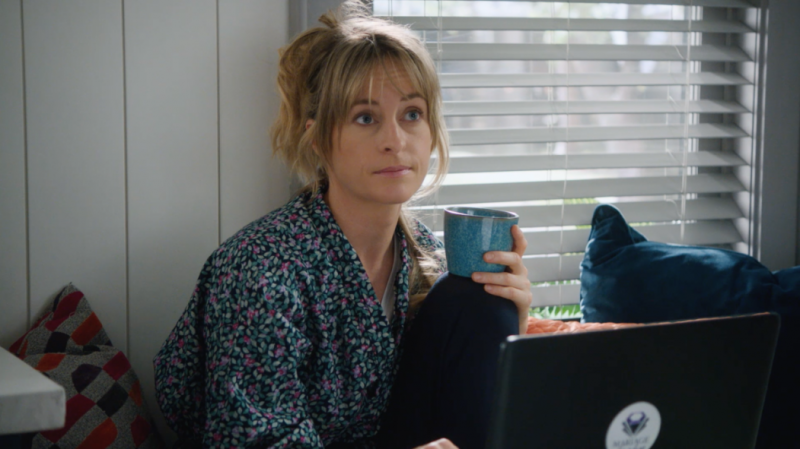 Unless we can attend the long-awaited last version of J'aime Hydro as planned at the theater, we can admire the full extent of Christine Beaulieu's talent this winter in the series L'œil du cyclone .

We had a long discussion before the Holidays about the play I love Hydro , without a doubt the greatest theatrical success of recent years in Quebec. Christine Beaulieu was particularly excited about the last chapter of the play featuring the new CEO of Hydro-Québec, Sophie Brochu.

We also discussed how this play changed the life of the actress, for whom there is clearly a “before” and an “after”, the social and political impact of her documentary play and a host of other issues. “ I love Hydro only brought me good,” she says.

But the Omicron variant and the new health rules that came into effect at the end of December for an indefinite period have decided otherwise. The performances planned at Duceppe's from January 7 to 9 had to be postponed, like so many other artistic projects.

“You have to give up, it's very hard to accept that! says Christine Beaulieu. I met Sophie Brochu on November 29. We were very excited, my team and I, to go on stage just a month after my meeting with super new, super topical, really new material… This report saddens me deeply. “

A creaking and current comedy

While waiting for the reopening of the theaters and a new schedule of performances, we watch with pleasure the comedy The eye of the storm , whose first season launched in 2021 on the Véro.tv component of the Tou.tv Extra is now broadcast on the small screen.

Christine Beaulieu carries on her shoulders this squeaky, rhythmic, thoughtful and very current, which illustrates the mental load of women and for which she won a Gemini award.

The actress plays Isabelle, a separated mother with three children who juggles homework, lunches, each other's sores, and her wedding planning business.

In this first leading role in TV, she embodies with a natural disarming this sarcastic woman a little control freak with the repartee of hell. In short, this perfectly imperfect mother.

“There is something very close to me in this character, in how she reacts, how she speaks”, says the actress who gave herself the challenge to make “everything that comes out of this girl's mouth be super embodied”.

Christine Beaulieu is delighted to see that her character resonates with several viewers. “The most touching feedback I have had is from moms who wrote to me, 'My God, I'm like Isabelle! I recognize myself. I can have a pillow fight too. I too can eat cake with my hands. I, too, don't have to follow the rules all the time. “”

Eye of the Storm makes people want to let go of certain matters and play down certain situations. This is what gives me the most pleasure.

The actress is particularly touched by the relationship between her character and that of her ex, Jean-François (Patrick Hivon). “They're really not perfect, but cuddly , there is respect. That's what I find beautiful. “

Those who have subscribed to the ICI Tou.tv Extra who have already watched the first season in a row will be delighted to learn that the continuation of the adventures of Isabelle and her family will be offered there from February 3.

Even before seeing the final result, Christine Beaulieu is already convinced that this season will be better than the first. Already, she feels a contagious enthusiasm among her colleagues who are polishing the editing of the new episodes.

“This season will be more assumed, more mature and just more solid than the first,” she says, mentioning that the bond between the actors persists more than ever on the screen.

< p> Christine Beaulieu also reveals to us that Isabelle will develop a relationship with a new neighbor played by Pierre-Yves Cardinal and that there will be several moments of emotion.

“There is a scene in especially in season 2… Oh boy ! It vibrated for us, ”she said, being careful not to say too much about the nature of the plot.

The first season of Eye of the Storm < em>is broadcast on Mondays at 7:30 p.m. on Radio-Canada. The second season will be offered on the Véro.tv section of the Tou.tv Extra from February 3.

Christine Beaulieu on the big screen

Christine Beaulieu is also in demand at the cinema. Here are four films in which we will soon be able to see her.

This feature film by Sarah Fortin is particularly close to her heart. Christine Beaulieu plays Sophie, who inherits her father's hunting camp in Schefferville. At the heart of her stay in the North is explored the meeting between natives and non-natives, which is depicted in a very realistic way according to the actress. “It's hard and it's beautiful,” she said.
Theatrical release scheduled for February 4th.

In this film on the Norbourg affair, the character of Christine Beaulieu investigates the actions of CEO Vincent Lacroix (François Arnaud) and his right-hand man Eric Asselin (Vincent-Guillaume Otis). “Maxime Giroux is one of my favorite directors in Quebec, I was very excited to work with him”, she mentions.
Theatrical release scheduled for February 18th.

This satirical comedy by Louis Godbout “quite crazy and completely crackpot “, according to by Christine Beaulieu, features atypical golf players. The actress plays there alongside Benoît Gouin, Steve Laplante and Alexandre Goyette. “It's well crazy !” she laughs.
Theatrical release scheduled for spring 2022.

Christine Beaulieu finished shooting this film by Guy Édoin last November, telling the tormented story of three sisters on a family farm. She gives the answer to Pascale Bussières, Marilyn Castonguay and Micheline Lanctôt. “We are a whole quartet!” she gets carried away.
No release date has been announced.

Teilor Stone has been a reporter on the news desk since 2013. Before that she wrote about young adolescence and family dynamics for Styles and was the legal affairs correspondent for the Metro desk. Before joining The Bobr Times, Teilor Stone worked as a staff writer at the Village Voice and a freelancer for Newsday, The Wall Street Journal, GQ and Mirabella. To get in touch, contact me through my teilor@nizhtimes.com 1-800-268-7116
Previous ArticleArnaud Soly thoroughly ridicules influencers at the party in Tulum
Next ArticleWe fall for the short film “Les grandes claques”