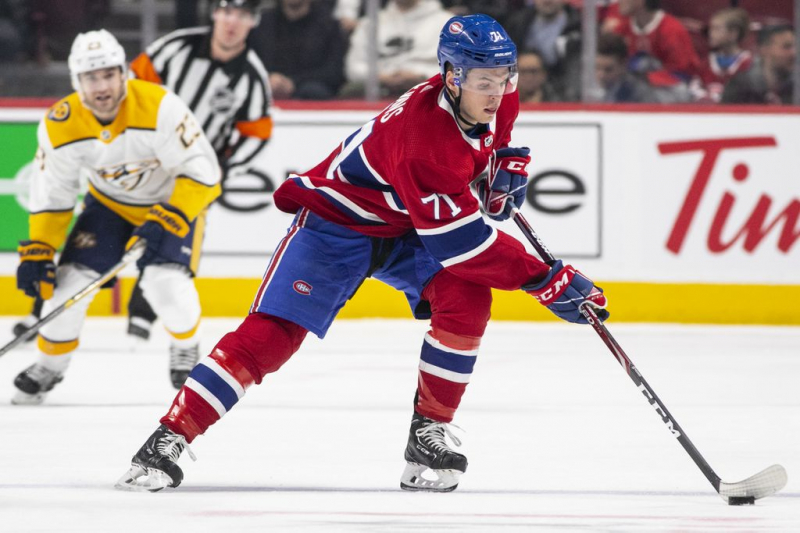 Share September 23, 2020 3:16 pm Share Jake Evans accepts two-season contract extension from Canadian Frédéric Daigle The Canadian Press Jake Evans is grateful to the Canadian for making him a seventh-round pick in the 2014 NHL Draft. did not hesitate to put his name at the bottom of the contract extension offer that Marc Bergevin presented to him on Wednesday.

“I really enjoy my life in Montreal and Laval. I like the direction the organization has taken and I am very happy with this contract, ”he said on video conference.

He is also very grateful to the Canadian for believing in him.

“(Draft day) it was a roller coaster ride,” he said. I expected to be drafted, but on the seventh round I stopped looking and left the house. When I got the call from the Canadian, it was a great feeling. I think that's part of why Montreal is so special to me: it's the only team that really believed in me, that took a chance with me. They turned a tough day into a great day. I will always remember it. ”

Being drafted so late (207th overall), however, had a positive effect on his development, estimates the six-foot, 185-pound skater.

“It turned out to be a blessing. It took the pressure off me and allowed me to go at my own pace. To go to school and focus on improving myself from year to year. Even signing my first contract, that's the mentality I kept. People don't expect much from a seventh-round pick; it becomes a surprise if you do well. That's what I wanted to do: prove that people were wrong, ”he said.

This attitude allowed him to climb the ranks, one by one. Before playing 13 games with the Habs this season (scoring two goals and an assist), the center player played for two seasons with the Rocket. In 118 AHL games, he scored 27 goals and added 56 assists.

“I always thought I could play back and forth on the ice. I like to take these big face-offs. I want to build on my experience, continue to build my game, ”he first mentioned.

“(Playing in the playoffs) I learned how important it is not to make mistakes at this level. I also saw what was the level of intensity in these meetings. I think that the team and I have taken important steps forward in these meetings, ”he continued.

Evans has not been eyeing Europe for a job while waiting for activities to resume, whether in the NHL or the AHL. Instead, he will use the break to train in Toronto, where he lives. He wants to refine his game, especially on face-offs, he who loves this phase of play.

“I really like playing in the center. It's a pride for me to win a face-off or to play a big game in defense. (…) I think faceoffs are won with greater force. This is an aspect that I will try to improve, ”he concluded.

Teilor Stone has been a reporter on the news desk since 2013. Before that she wrote about young adolescence and family dynamics for Styles and was the legal affairs correspondent for the Metro desk. Before joining The Bobr Times, Teilor Stone worked as a staff writer at the Village Voice and a freelancer for Newsday, The Wall Street Journal, GQ and Mirabella. To get in touch, contact me through my teilor@nizhtimes.com 1-800-268-7116
Previous ArticleNo surprise at the Phoenix
Next ArticleJeff Petry accepts four-year contract from Canadiens