Karine Vanasse in interview with Métro for the release of the film Arsenault & son, of Rafaël Ouellet

Karine Vanasse knows glam by heartand the splendor of the red carpets of Quebec and the United States. However, the actress selects her commitments with ease, guided by the encounters and the human benefit she will derive from them. Discussion with an artist crowned with glory, but with her feet firmly planted on the ground.

Careers like that of Karine Vanasse, who began as a teenager (in 1998 with the film Emporte -moi, by Léa Pool), free from almost any controversy and having rolled along at a steady pace, in the languages ​​of Molière as well as Shakespeare. All this while constantly keeping an arm's length distance between his private life and his public image. 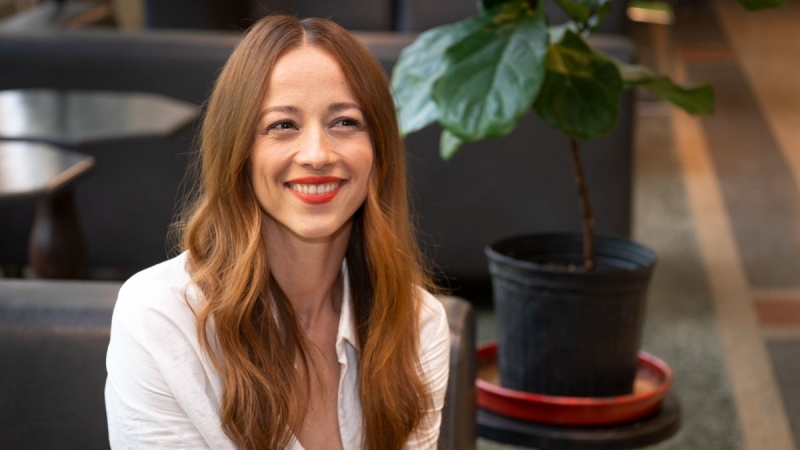 Too humble to dare to acquiesce when pointed out to her, Karine Vanasse concedes that she is “well surrounded”, one of the keys, according to her, to lasting in her profession, but also to allowing any human being to evolve with dignity.

“I am surrounded by people who have heart, and who, professionally, are in a place that I respect and admire. Who were able to remind me, when confidence was less there, of the good reasons for doing things. My mother was my agent at the beginning of my career, but still today, I have the chance to work with intelligent, focused, grounded people.in the right place, who don’t be shaken by what isn’t matter. The best card I have is this one,” says Karine during a one-on-one with Métro, the day after the Gala Québec Cinéma, where she ran the looks with a look as chic as it is sexy.

“What are we left with, in the end? These are the bonds we forge, with work colleagues, friends. The productions are momentary and ephemeral, but behind it, there remains a team. And these teams, I owe them a lot.” 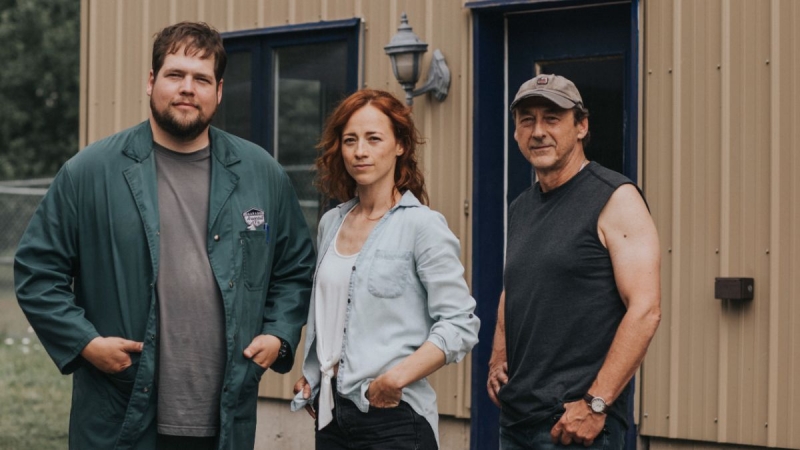 “You know, the famous sentence that says that we are always as good as our last project, she continues, thinking aloud. When we make choices, we never really know what we are getting into. Maybe that's why it's so touching to see that it continues, because it's hard to know what it's all about!”

The agenda of Karine Vanasse, 38, is full of great projects: Avant le crash, the first series signed by the couple Éric Bruneau – Kim Lévesque Lizotte, set in a world of young professionals of finance, currently filming for Radio-Canada; the English version of the first season of Plan Bthat will be broadcast by CBC in Canada and that we hope to see shine internationally afterwards (Karine will interpret the role played in Quebec by Magalie Lépine-Blondeau and will co-star with actor Patrick J. Adams, of Suits< /em>); the film she co-produced on the Chantal Daigle affair, Tanya Lapointe’s first fictional production; the Canadian production Bones of Crows, about residential schools, where she plays an “evil” nun.

And, possibly, soon, other great adventures in the United States, because “our” Karine Vanasse, who shone in foreign canons like Revenge (2013) and Pan Am em>(2011) is continuing its efforts with its American agency. But her team there, she hastens to clarify, must understand that she may want to prioritize contracts at home, in Quebec. With, as the main beacon to guide her, the importance of the time spent with four-year-old son Clarence, whom she often drags to work.

“Being an actor is blurry for a child,” she laughs. I explain to her that I am pretending to be the mother of another child. That I play a villain, but we laugh between takes. We demystify all that.” 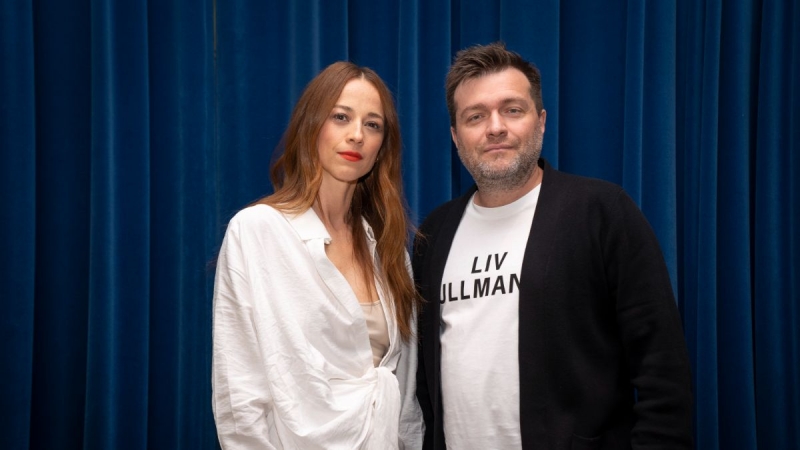 Karine Vanasse with director Rafaël Ouellet, who directed her in the series Blue Moon and the film Arsenault & son
Credit: Josie Desmarais/Métro

Then, starting today, we can see Karine in the excellent film Arsenault & son, of Rafaël Ouellet (Camion,Blue Moon,New address,Ruptures). This rural feature film, filmed in Dégelis, the filmmaker's native town, opens a breach in an activity that is little known to say the least: poaching.

At the heart of the story, the Arsenault clan (Julien Poulin, Luc Picard, Guillaume Cyr, Pierre-Paul Alain, Micheline Lanctôt) profits from illegal hunting behind the facade of a family garage. The arrival of Émilie (Karine Vanasse), a radio journalist who carries her share of mystery, will stir up trouble between the two brothers played by Guillaume Cyr and Pierre-Paul Alain, and will shake up the small business >clandestine.

What led Karine Vanasse to wear Emilie's campaign outfits, a thousand miles from the glitter mentioned at the start of this article? Again, the soul spoke:  Karine had worked with Rafaël Ouellet on the set of Blue Moon and wanted to renew their complicity.

“The universe m really seduced. I wanted to infiltrate the reality of game wardens! I like when cinema immerses us in universes that we know little about. Rafaël returns to his cinema, and I wanted to participate in that. I really liked Truck. I was honored that he asked me to be there. 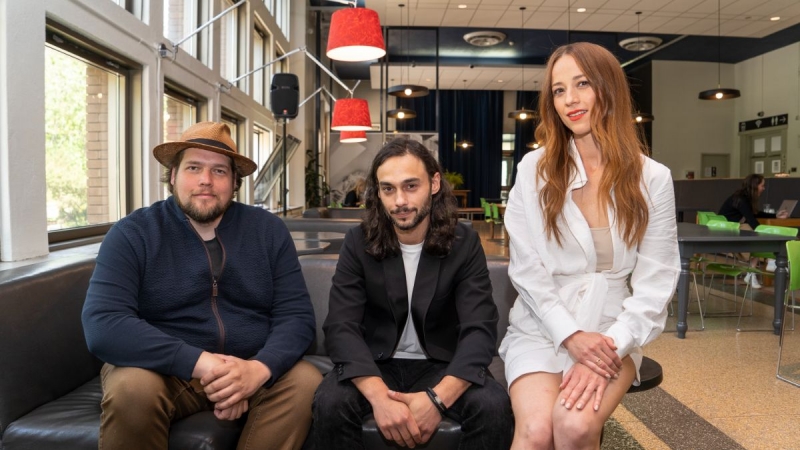 Karine Vanasse alongside actors Guillaume Cyr and Pierre-Paul Alain, whom she plays opposite in the film Arsenault & son
Credit: Josie Desmarais/Métro

She says she loved staying in Témiscouata, near New Brunswick, in this particular mix of “accents and realities”. Nearby, always, beautiful people with whom she has genuinely forged ties.

“I am very grateful in general. It's fun, exploring different ways of working, with people whose codes we recognize, and whose vision we feel like honoring. To be with them, to see what we can create that is unique together, to want to get really involved in a project. This is what drives me and excites me!”

Teilor Stone has been a reporter on the news desk since 2013. Before that she wrote about young adolescence and family dynamics for Styles and was the legal affairs correspondent for the Metro desk. Before joining The Bobr Times, Teilor Stone worked as a staff writer at the Village Voice and a freelancer for Newsday, The Wall Street Journal, GQ and Mirabella. To get in touch, contact me through my teilor@nizhtimes.com 1-800-268-7116
Previous ArticleDonald Lauture, the Montreal DJ who makes F1 swarm on the planet
Next ArticleOnly positive vibes with the music of P'tit Belliveau at the Francos