Math Duff at the Bell Center: a big and happy mess 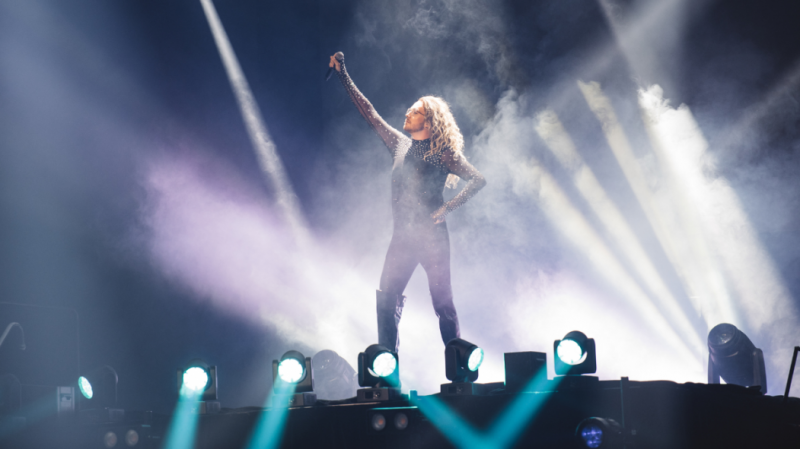 Mathieu Dufour put on his famous “dog boots” for his first show at the Bell Centre.

That's it, Mathieu Dufour “made the Bell Center” as he says! Two years after making himself known to the general public with his Show-rona virus broadcast on Instagram, the comedian knew how to excite his audience in a crazy atmosphere, halfway between a Celine concert and an evening with friends.

Pears and a few messages displayed on the giant screens of the Bell Center: “Your attention”, “Kekou everyone”, “Take out your cell phones”. This is how the show began before the comedian even pointed the tip of his nose.

Pears as in “pouère-décrisse”, the Math Duff version of the sonne-décrisse which consists of to send pears (virtual, it goes without saying) to a targeted person, without giving him an explanation. Radio host Pascal Morrissette, who was the designated victim, therefore received a whole slew of them in his DMs, the lucky one. A simple joke then, but wait until you see the rest.

Light effects. A figure with long hair stands out on stage, with her back to the standing spectators who cheer her on. Except that it is in the middle of the floor that Math Duff finally appears in the spotlight before crossing the public to go up to join his dummy double which will be evacuated by a slide provided for this purpose.

And it’s not over! “I like to push the jokes too far”, warns the comedian who returns so quickly behind the scenes, followed by a camera “like Céline”, to change. He returns moments later, dressed in a gorgeous sequinned onepiece and his signature “female dog boots” that are well worth their applause. 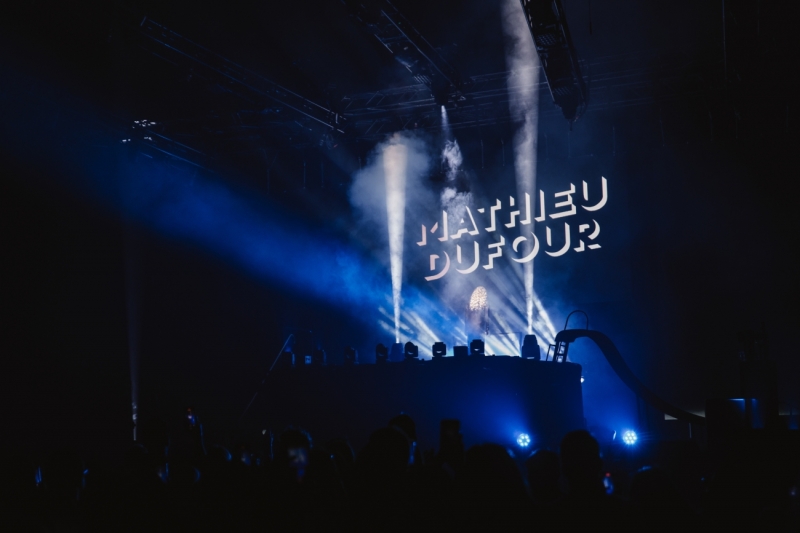 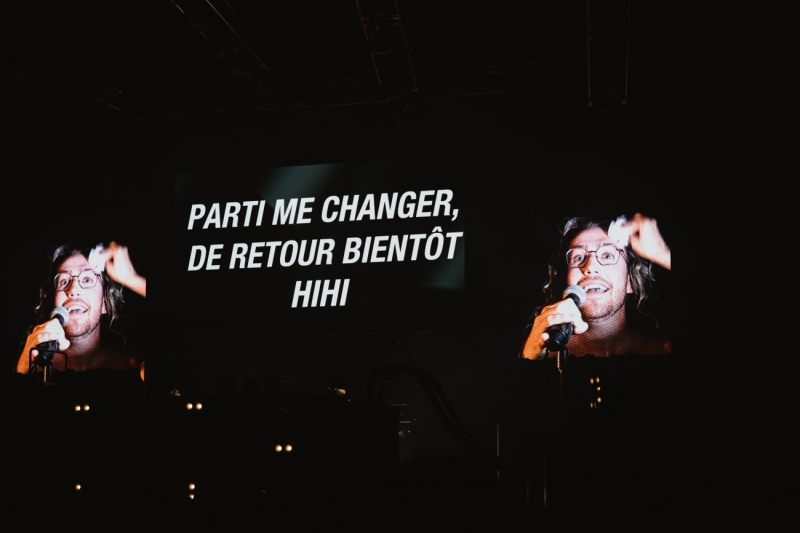 After a few “it doesn’t make sense to be here the gang” and a few anecdotes about the showsof Justin Bieber or Céline whom he had come to see at the Bell Center “to prepare”, Math Duff welcomed his first guest: Pierre-Luc Funk, also in dog boots, who came to dance with him on an extract from C.O.B.R.A. by Marie-Mai.

Later, his friend, comedian Ève Côté, would come and share the stage with him to roaster, armed with a “< em>gun to sweaters” to send his punchlines out into the public in the form of printed t-shirts. 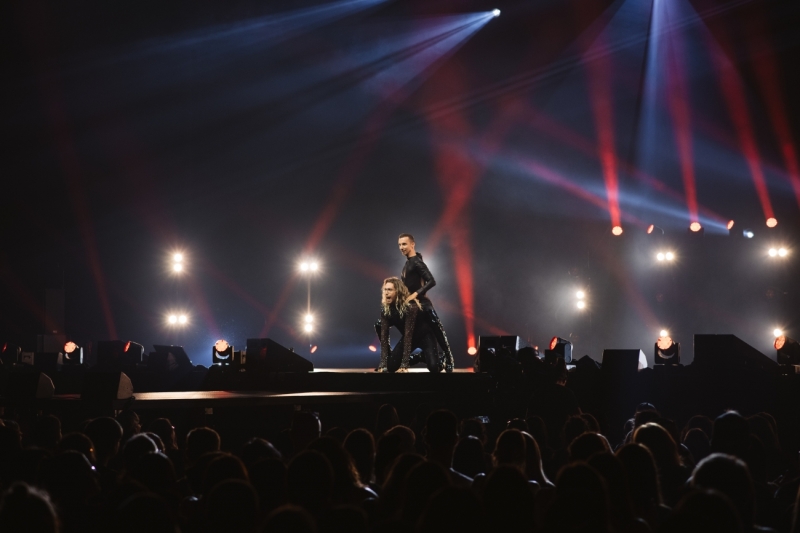 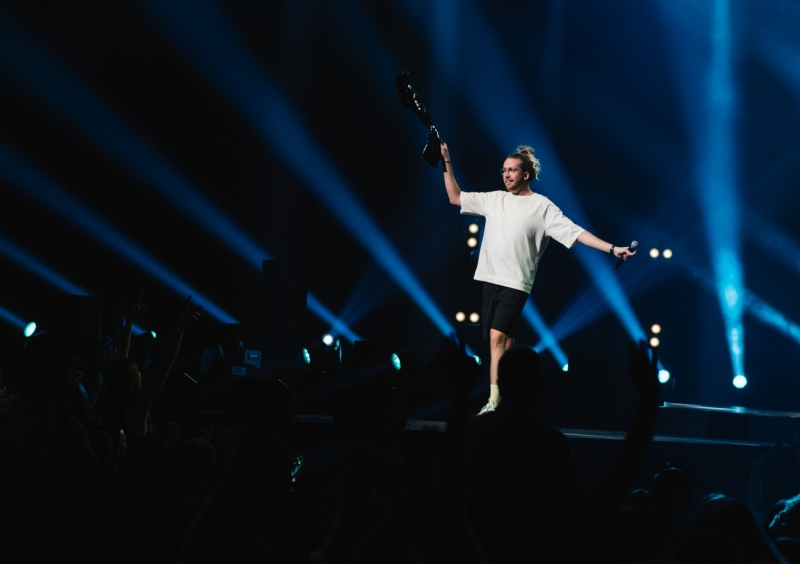 “I don't really know where the show is going,” Math Duff laughs between these two surprise interventions. But, you know that I'm a fan of parentheses and I feel like telling you silly stories.”

And it's certainly listening to his personal anecdotes interspersed with a thousand digressions that we laugh the most. From paintball with the cadets, to the “stealing” of muffins in a McDonald's in Saguenay, passing through his meeting with Mesmer or his disguise as a satanic-looking Merlin during a summer camp medieval, everything is tasty!

Obviously, the show could not end other than with a live interpretation with Véronique Cloutier of their “global hit“: the song “Poulet cru”. The two acolytes of Show-rona therefore found themselves on stage surrounded by dancers to sing in duet, lights and pyrotechnics in support. A performance that earned them laughs, thunderous applause and a standing ovation.

Visibly moved at the end of the show, Math Duff took the time to sit down in front of the stage for a last warm thank you to the 13,000 people who came to see him, who did not seem to intimidate him despite their number.

A little earlier on Saturday, the comedian announced on his social networks that the show would be filmed to be broadcast on Netflix, nothing less! He did not fail to underline this during the show, having fun with his audience to stager transitions for the editing.

He also wished good luck to the people who will be in charge of translating his words into 10 languages ​​and who, according to him, are at risk of “burning out”.

Fr waiting to see the show again on Netflix, we will continue to laugh with him at his stories Instagram that make everyday life sweeter (and crazier).

And in any case , Mathieu Dufour can now say it, the Bell Centre, “that's done!”.

Mathieu Dufour will also be performing on August 13 at the EDN Recreation Center in the Islands -de-la-Madeleine and September 1st at the Alma humor festival. The Just for Laughs festival continues until July 31st.

Teilor Stone has been a reporter on the news desk since 2013. Before that she wrote about young adolescence and family dynamics for Styles and was the legal affairs correspondent for the Metro desk. Before joining The Bobr Times, Teilor Stone worked as a staff writer at the Village Voice and a freelancer for Newsday, The Wall Street Journal, GQ and Mirabella. To get in touch, contact me through my teilor@nizhtimes.com 1-800-268-7116
Previous ArticleJust for laughs: Rosalie Vaillancourt, a not too unworthy mom
Next ArticleThe iconic Diane Dufresne launches Montreal Pride with… four songs