By Teilor Stoneon November 3, 2020in Politic 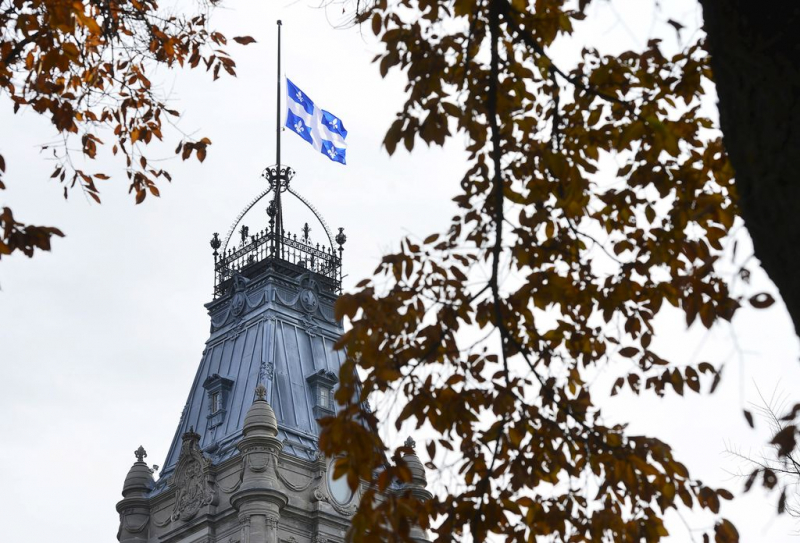 The Fleurdelysé was placed at half mast above the Parliament of Quebec, following the weekend slaughter in Old Quebec.

Share November 3, 2020 12:48 p.m. Share Killing in Old Quebec: minute of silence observed by Quebec elected officials Caroline Plante The Canadian Press QUEBEC – The Members of the National Assembly will express with one voice on Tuesday their deep sadness at the tragic events that have occurred in Quebec on the evening of October 31.

On Halloween night, an assailant dressed in medieval costume and armed with a Japanese sword strolled through the streets of Old Quebec where he killed two people and wounded five others.

Tuesday afternoon, the Parti Québécois (PQ) will present a motion to honor the memory of Suzanne Clermont and François Duchesne, both brutally murdered, and to wish a speedy recovery to the injured.

The motion will also salute the work of the first responders, and ask elected officials to observe a minute of silence in memory of the victims.

“In the first hours, the words are ridiculous, we can underline the drama, we can offer our sympathies, but there are reflections that must be imposed on mental health”, said in a press briefing the parliamentary leader from the PQ, Pascal Bérubé.

Opposition parties have not clearly linked Saturday's drama to the mental health “crisis” that they say has plagued them since the start of the pandemic, other than to say that the alleged killer suffered from mental disorders.

They echoed the mayor of Quebec, Régis Labeaume, and called for a national debate on the issue of mental health, which until now has been ruled out by the Legault government.

On Monday, the Minister for Health and Social Services, Lionel Carmant, announced the addition of $ 100 million for mental health services, while denying the existence of a crisis on this issue.

“Minister Carmant's announcement on mental health should not be the end of the debate in Quebec on this issue; on the contrary, it must be the beginning, ”insisted the co-spokesperson for Quebec solidaire, Gabriel Nadeau-Dubois.

“Quebec needs a major social debate on the issue of mental health. We've been sweeping this issue under the rug for too long, ”he added.

All the governments that have succeeded each other have their share of responsibility, according to the liberal leader Dominique Anglade. She proposed a transpartisan parliamentary commission, like the one on medical aid in dying a few years ago.

Teilor Stone has been a reporter on the news desk since 2013. Before that she wrote about young adolescence and family dynamics for Styles and was the legal affairs correspondent for the Metro desk. Before joining The Bobr Times, Teilor Stone worked as a staff writer at the Village Voice and a freelancer for Newsday, The Wall Street Journal, GQ and Mirabella. To get in touch, contact me through my teilor@nizhtimes.com 1-800-268-7116
Previous ArticleEthics Committee: “procedural nonsense” after a mistake by the Bloc
Next Article$ 7.5 million to make Quebec farms safer