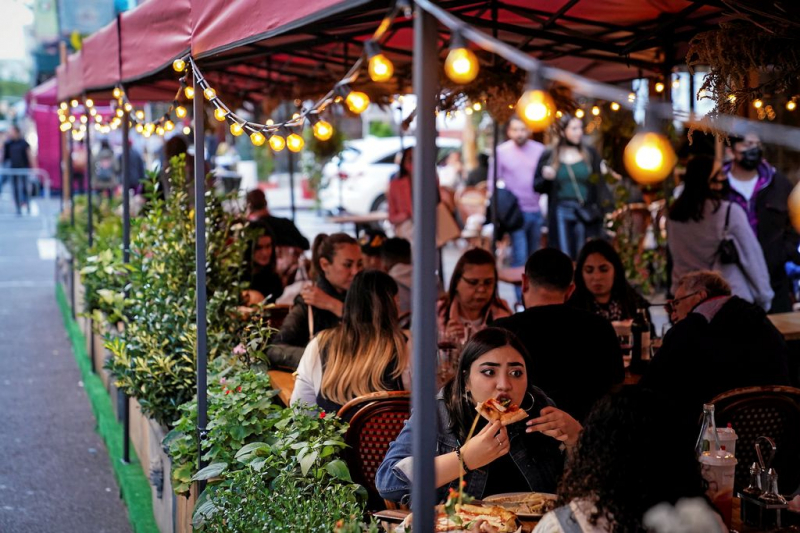 People dining on the terraces in New York on Saturday.

Share October 4, 2020 8:18 p.m. Updated at 11:57 p.m. Share New York palaces mourn the jet-set Catherine Triomphe Agence France-Presse NEW YORK – They booked a room at $ 1,000 that morning, and came down for a night at the prestigious Pierre hotel, two hours by car from their home: John Farrell and his wife are part of a new local clientele whose large New York hotels have to be content with the pandemic, after years of prosperity.

No more jet-set, the mixing of languages from around the world or the ballets of yellow taxis and limousines in front of this hotel facing Central Park, famous for its gala evenings or its suites that have hosted Audrey Hepburn, Elizabeth Taylor or, more recently , Lady Gaga and the heroines of the movie Ocean's 8 .

After six months of closure and the end of tourism and business travel, this gem, taken over in 2005 by the Indian group Taj, reopened in mid-September, but is only a shadow of itself.

“It's like in the streets, it lacks animation, it lacks people,” said John Farrell, 38, a construction entrepreneur who came from the great New York suburbs with his wife.

Usually in this season hotels are full, despite an average price of $ 300 a night.

“It starts at the end of August with the US Open, then the UN General Assembly, every conceivable convention, fundraising galas, fall weddings, then Thanksgiving, Christmas and New Years. … It's non-stop, ”emphasizes François-Olivier Luiggi, manager of this 189-room hotel and 80 apartments owned by wealthy individuals.

In addition to foreign tourists, who represented nearly a quarter of pre-pandemic visitors, American tourists are also almost banned: New York has been obliging since June any visitor arriving from states where the COVID-19 positivity rate exceeds 10% – a 30 states now – to isolate themselves for 14 days.

Instead of coming by plane, from Europe or California, it's time to vacation near home, staycations : customers now arrive by car, for short stays of 24 or 48 hours, often to see relatives, says Luiggi.

Despite omnipresent distancing and disinfection measures, the hotel is capped at around 25% filling, with more than half of the 400 employees unemployed, he said, without despairing: “The Pierre has been around for 90 years, it will be still there in 90 years ”.

Not all establishments can say the same.

Despite a push from the federal government, including through loans for small businesses, some 200 of New York's 700 hotels are currently closed.

Nearly 140 only run by welcoming caregivers and people exposed to the virus who cannot isolate themselves at home, or homeless people whose reception centers have closed with the pandemic, underlines Vijay Dandapani, president of the Hotel New York Association, which represents some 300 hotel establishments.

Those reserved for “real” visitors are only 10% full on average, he said, and some 25,000 employees in the sector are unemployed.

While in Europe, hotels “can benefit from a bit of an upturn in intra-European tourism, we have nothing,” he says.

Some have definitely thrown in the towel, like the famous Times Square Hilton, which had 478 rooms.

The fall is brutal for the Big Apple which had seen, in recent years, hotels sprout like mushrooms, in Manhattan, but also in the neighborhoods near Brooklyn and Queens.

With an annual number of tourists flying from record to record to exceed 65 million in 2018, the investment was tempting. And the city found its account, touching last year $ 3.1 billion in taxes paid by the sector, according to Mr. Dandapani.

The supply of rooms had increased so much over the past 10 years that “the New York hotel market was starting to show signs of slowing down” before the pandemic, said Ramya Murali, hotel sector analyst at Deloitte.

New York was “the first market to undergo substantial containment measures”, and local authorities are “conservative on reopening”, making the city “a market closed to travelers for the longest period”, underlines t -she.

“People like us need to come and spend money, it will help,” positive John Farrell.

For their brief stay in New York City, he and his wife were planning on shopping, dining on the terrace – more than 10,000 have opened in New York City since the pandemic – and, for want of Broadway shows, “to go and smoke a joint in Central.” Park ”.

Teilor Stone has been a reporter on the news desk since 2013. Before that she wrote about young adolescence and family dynamics for Styles and was the legal affairs correspondent for the Metro desk. Before joining The Bobr Times, Teilor Stone worked as a staff writer at the Village Voice and a freelancer for Newsday, The Wall Street Journal, GQ and Mirabella. To get in touch, contact me through my teilor@nizhtimes.com 1-800-268-7116
Previous ArticleAnother First Nation embarks on self-regulated lobster fishery
Next ArticlePasta maker Alegria takes over