No change of side for the Adélard-Collette sidewalk 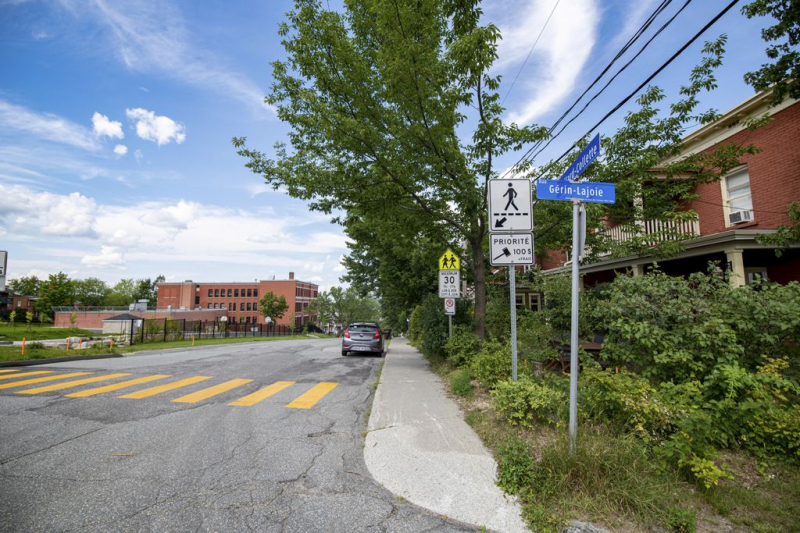 The sidewalk on rue Adélard-Collette will remain on the east side.

Jonathan Custeau La Tribune The City of Sherbrooke finally sides with the citizens of Adélard-Collette Street and agrees not to rebuild the sidewalk on the west side of this traffic lane. Councilor Karine Godbout made the announcement Tuesday after six citizens addressed questions to city council.

Citizens mobilized after learning on Friday that their representations to the City had not influenced the choice of officials for the reconstruction of the sidewalk.

Until now, the City has been arguing that it had chosen to move the sidewalk to ensure connectivity with other sidewalks and the generators of walking. It indicated that the displacement generators on rue Adélard-Collette are located on the west side.

It was added that the new configuration would connect several destinations to the pedestrian network in a safe manner, in particular the LaRocque school, the Immaculate Conception church and the building where several community activities take place.

Karine Godbout finds the analysis of the Urban Infrastructure Service interesting. “The City wanted to set up a network that meets the needs of vulnerable people. The community sees no added value, no interest. All of these arguments are relevant. We had a discussion at the executive this morning (Tuesday). The file evolved as a result of the issues raised by citizens. The Urban Infrastructure Department will work on a plan to make the sidewalk to the east, from Gérin-Lajoie to Union, on the same side as the current lighting. “

Ms. Godbout sees this as a signal that citizens have things to say about their environment and that the City's processes are not always adapted.

“When there are major changes in a street or a neighborhood that affects safety or active transportation, it would be important to see how we can consult citizens about it. The citizens' intervention this evening is because I told them that the decision was upheld last Friday. I thank people for coming to the meetings and for taking an interest in this neighborhood life. “

Among the citizens' interventions, Patrick Chabot recalled that the citizens, unanimously, considered that removing the sidewalk on the east side would be a considerable loss.

Francis Lafortune, for his part, wondered whether the city's services had sought to know the lifestyle habits of local citizens.

Jean-Paul Bouthot argued that there was no residence on the church side and that citizens, unlike the church, pay taxes. “If the elderly don't want to walk in the street, they will have to cross the street twice to see their friends. The sidewalk provides a feeling of security when leaving home. “

Jacinthe Caron asked, in a context where citizens are unanimous in saying that the movement of the sidewalk would not be optimal, if the council could require that the sidewalk be kept on the east side.

Julie Bernard, she recalled that the street lighting is on the east side. She was concerned that pedestrians to the west would have to cross the entrances to the church parking lot.

“The density of the area means that residents will have to circulate constantly in cars to get out of their homes, neighbors or go for a walk, which reduces their safety. “

In conclusion, citizens have been heard.

Teilor Stone has been a reporter on the news desk since 2013. Before that she wrote about young adolescence and family dynamics for Styles and was the legal affairs correspondent for the Metro desk. Before joining The Bobr Times, Teilor Stone worked as a staff writer at the Village Voice and a freelancer for Newsday, The Wall Street Journal, GQ and Mirabella. To get in touch, contact me through my teilor@nizhtimes.com 1-800-268-7116
Previous ArticleBeaudin resigns from the economic development committee, the mayor is jubilant
Next ArticleFive years in prison for sexual acts