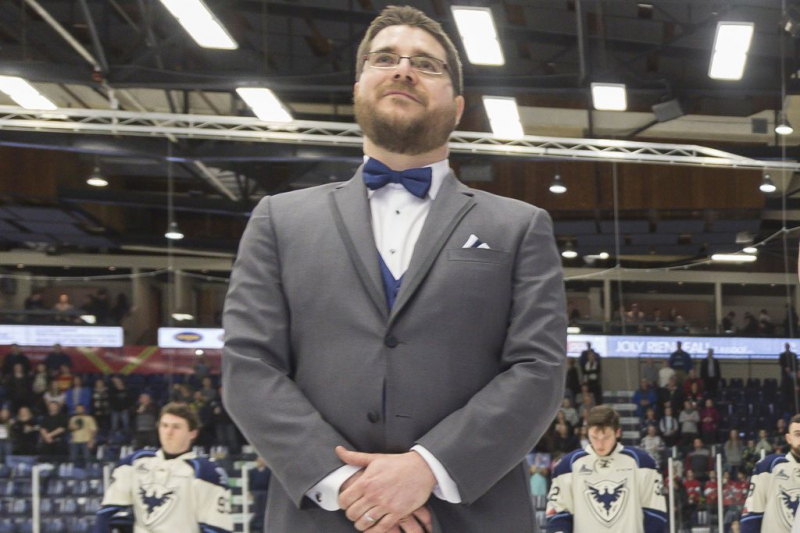 Guillaume Corriveau became known publicly in January 2018 when he celebrated his wedding at the Palais des Sports in Sherbrooke before a game with the Sherbrooke Phoenix.

René-Charles Quirion La Tribune A Sherbrooke notary must defend himself against criminal accusations of computer luring on six minor plaintiffs.

Guillaume Corriveau, who also taught at the college of the Séminaire de Sherbrooke and the University of Sherbrooke, allegedly used a fake profile to obtain sexually explicit photos of teenage girls.

The 36-year-old appeared on Wednesday to be accused of computer luring on six complainants between February and September 2020 before judge Claire Desgens of the Court of Quebec at the Sherbrooke courthouse.

The prosecutor for criminal prosecution Me Laïla Belgharras opposed the release of the accused.

The man was scheduled to give a course in corporate law at the Séminaire de Sherbrooke on Wednesday, but he never showed up. The announcement of his arrest sowed consternation in the circles where he worked.

Using his fake profile, he allegedly tricked them into sending him pictures of them that amount to child pornography.

New charges could be laid in the coming weeks.

Guillaume Corriveau was arrested on Tuesday by the SQ's major crime investigation department.

Since there are several complainants in the file, the SQ has deployed the structure for the management of serial crime investigations (GECS). This unified command structure, within which the Quebec police services work in partnership, makes it possible to quickly identify crimes committed by predators and to proceed to their arrest.

This provincial coordination therefore allows for the pooling of police resources and aims to better protect victims.

Known in his community

Guillaume Corriveau became known publicly in January 2018 when he celebrated his wedding at the Palais des Sports in Sherbrooke before a game with the Sherbrooke Phoenix.

Previously, he sat on the board of directors of the Jeune chambre de commerce de Sherbrooke.

He has been registered with the Chamber of Notaries of Quebec since 2010. In his professional profile of the order, his field of activity is described as a notary practicing in commercial law.

It is Me Marie-Ève d'Anjou who defends Guillaume Corriveau.

It was impossible to know, Wednesday, what happened to the teacher to his employers in the education community.

The University of Sherbrooke did not want to comment on the arrest of the lecturer or explain the procedures in such a case. She only specified that an internal process was going to take its course. The Seminar also made it known that it could not disclose any information. With Isabelle Pion

Teilor Stone has been a reporter on the news desk since 2013. Before that she wrote about young adolescence and family dynamics for Styles and was the legal affairs correspondent for the Metro desk. Before joining The Bobr Times, Teilor Stone worked as a staff writer at the Village Voice and a freelancer for Newsday, The Wall Street Journal, GQ and Mirabella. To get in touch, contact me through my teilor@nizhtimes.com 1-800-268-7116
Previous ArticleMurder in Old Quebec: a message from the Crown on mental health
Next ArticleIn reflection, the CIUSSS relies on its interventions in the field