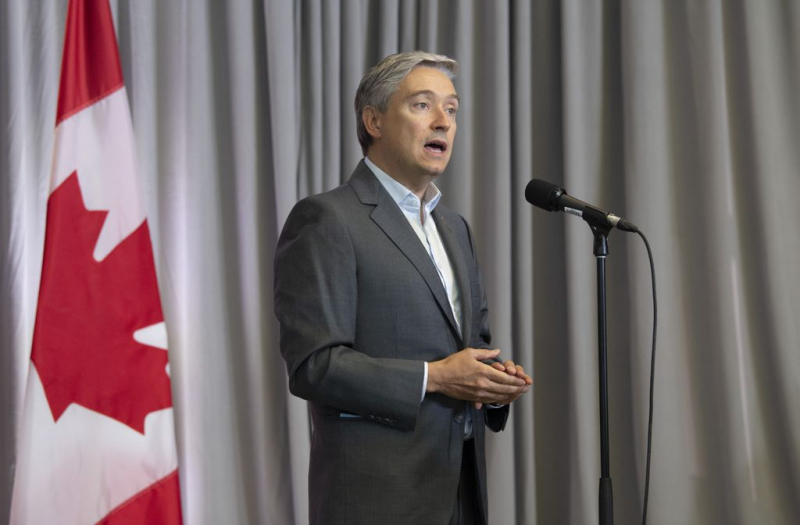 Foreign Minister François-Philippe Champagne said he was committed to “upholding the highest standards” when reviewing companies' export permit applications, including the commitment of the Canada to the United Nations Arms Trade Treaty.

Minister Champagne made the pledge in an interview with The Canadian Press as Turkey faces allegations that it is involved in this week's resumption of fighting between Armenia and Azerbaijan.

The minister was responding to calls from organizations, Armenian Canadians and New Democrats to halt the export of electro-optical sensors manufactured by a company in Burlington, Ontario, which would be used in Turkish attack drones.

Turkey, a NATO member with Canada, said it supported Azerbaijan in resuming fighting with Armenia that erupted in Nagorno-Karabakh, a breakaway region in the South Caucasus on Sunday.

Armenia has accused Turkey of redeploying fighters from Syria and F-16 fighter jets to support Azerbaijani forces, but Turkey has denied sending people or weapons into the conflict.

Minister Champagne and his British counterpart Dominic Raab have expressed their concern over the large-scale military action between Armenia and Azerbaijan and called on them to negotiate peacefully through the Organization for Security and Defense. cooperation in Europe.

The Canadian NGO Project Plowshares has published a report alleging that Turkey is increasingly using an electro-optical sensor manufactured by L3Harris WESCAM, a Canadian subsidiary of the American company L3Harris, and that this use poses a substantial risk of violations of the human rights.

“I immediately ordered our officials to investigate the allegations,” Minister Champagne said in an interview with The Canadian Press on Thursday, which clarified that he was prepared to “suspend or cancel any license” that would have been badly used.

“I have spoken with the various interest groups, who have raised these issues, and I take their concerns seriously,” he said.

The group said it gathered evidence from public records, media reports, academic sources, credible human rights observers and open data that “strongly indicates” that the WESCAM sensors, which are mounted on unmanned aerial vehicles (UAVs), have been widely used by Turkey in recent military operations.

The report claims that Turkey has been using these sensors since 2017 as its military tries to end an insurgency in southeastern Turkey and is involved in military operations in Syria, Iraq and Libya.

“Such use raises serious red flags, as it has been alleged that the Turkish military has committed serious violations of international humanitarian law (IHL) and other violations, especially during airstrikes,” said the report.

“Turkey also appears to have exported drones equipped with WESCAM sensors to armed groups in Libya, a blatant violation of the nearly ten-year-old United Nations arms embargo. The dramatic increase in exports of WESCAM systems to Turkey has persisted despite Canada's 2019 accession to the Arms Trade Treaty.

The Armenian National Committee of Canada called on the federal government to “condemn this outright aggression” by Azerbaijan and immediately halt arms exports to Turkey “According to official reports, civilian and military casualties are increasing and the 'Azerbaijani aggression has caused significant destruction of civilian infrastructure, including basic humanitarian supplies, in part through the use of improved Canadian drones, ”the committee said in a statement this week.

Jack Harris, NDP foreign affairs critic, said the government could be complicit in human rights abuses by not properly regulating its arms exports to Turkey.

“The Liberal government needs to look in the mirror to reassess Canada's arms exports,” Jack Harris said in a statement.

During the interview, Mr. Champagne indicated that he takes Canada's legal obligations with respect to export permit applications seriously.

He said he was committed to “making sure they fit into the very robust system that we have”, adding: “Human rights are now an essential component”.

Minister Champagne declined to say how long his department's investigation would take. He said he would consult with NATO and other allies to “get the best intelligence possible”.

“And like I said, if there was any evidence that these permits were misused, I am ready and I will suspend or cancel any permit.”

Teilor Stone has been a reporter on the news desk since 2013. Before that she wrote about young adolescence and family dynamics for Styles and was the legal affairs correspondent for the Metro desk. Before joining The Bobr Times, Teilor Stone worked as a staff writer at the Village Voice and a freelancer for Newsday, The Wall Street Journal, GQ and Mirabella. To get in touch, contact me through my teilor@nizhtimes.com 1-800-268-7116
Previous ArticleThe Bloc Québécois will vote against the Trudeau government's throne speech
Next ArticleMarwah Rizqy: put an end to procrastination in schools