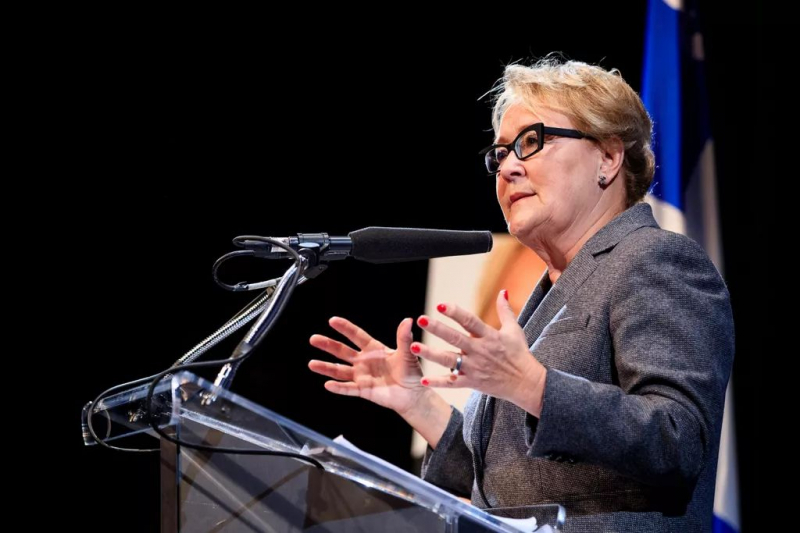 Share September 26, 2020 Updated September 27, 2020 at 12:53 am Share Pauline Marois denounces the exclusion of women from the political boy club Jocelyne Richer La Presse Canadienne QUEBEC – It is fashionable to claim that the glass ceiling of parliament has flown in shards. Women have apparently acquired equal status with men in politics, including access to the highest office. You will immediately be given the example of Pauline Marois.

But what does the main interested party think, who knows what she is talking about when we broach the subject of the place of women in politics?

Her observation, which is based on forty years of political life, is relentless: even today, women suffer from the impostor syndrome and seek their marks in the world of elected officials.

“I find that deeply sad, but women still often feel like impostors”, deplores Ms. Marois, in a long interview recently granted to The Canadian Press, on the occasion of the publication on Tuesday of her autobiography, “Pauline Marois: Beyond Power”, published by Éditions Québec Amérique.

For one who says that she often receives confidences and requests for advice from female recruits, politics remains a world built by men, for men, where women feel they are in minefield.

“It's a world, the boy club , which has its rules, which has its ways of doing things, which is impossible to penetrate for all intents and purposes”, according to the one who has nevertheless directed practically all the ministries, before being head of the Parti Québécois from 2007 to 2014, and, briefly, the first woman to occupy the office of the Premier of Quebec, from 2012 to 2014.

In view of his long and impressive political career, his observation may therefore be surprising. However, she says in her book that she never had the impression of being part of this impenetrable boy club, a circle of occult and parallel power where strategies are developed, alliances are made and decisions are made, around a beer or a golf club.

To make her place in spite of everything in this select club, the price to pay was for her to have to constantly prove herself, to work harder than the others, to accept to sacrifice her private life, by making people forget that she was a woman and a mother of a family. And living with the constant fear of getting squeezed.

After having studied in the offices of Jacques Parizeau and Lise Payette and having concluded that active politics was not for her, she was noticed by René Lévesque, who convinced her to run for the April 1981 elections, which bring the PQ back to power. She is 32 years old, is about to give birth, which does not prevent her from immediately accessing the Council of Ministers, as responsible for the Status of Women. He's a rising star.

She will have four children in quick succession, while continuing, as if nothing had happened, to work, smiling on her lips, often seven days a week, always available, from early in the morning until late at night. When she goes to the hospital to give birth, doctors have to practically tear her records from her hands. For one of her children, she doesn't even have time to go to the hospital and gives birth at home.

A disturbing paradox, the then Minister of the Status of Women, who fights to extend the rights of women, including those of mothers, does not allow herself any respite. Maternity leave is for others. Even with two, three, four young children, she never leaves her office for more than a few days after each childbirth. “Motherhood has never slowed me down”, she writes in her autobiography, a 440-page brick, which she dedicates particularly to young women.

The label of “superwoman” does not take long to stick to her skin. Everything seems so easy for her, who seems to prove that women can have it all: a successful husband, a host of children and a brilliant political career. As a bonus, she displays the ambition to become a chef. His first attempt dates back to 1985.

But at 71, the superwoman has grown into a grandmother of eight (soon to be nine) grandchildren, and she doesn't hide her regrets that she couldn't be home more often at that time. She admits that this superwoman image, made possible by significant financial means and the hiring of a full-time “nanny”, sent women a “contradictory” message, which could make them feel guilty if they did. could not reconcile everything.

“I shouldn't have acted like that”, assuming this image, she said today, hastening to add a caveat: it was impossible to act otherwise.

One of the rules of the boys club : absent are always wrong. “There is no such thing as a vacuum in politics,” says Ms. Marois, convinced that if she had been away more often and longer to be with her family, she would have been “squeezed” unceremoniously, whatever have been his service.

“I was pugnacious enough, fighter, to say: I'm going to prove to them that I'm capable of doing this. They will not be able to put me aside, under any pretext, especially that of having given birth to a child, ”said this feminist. To prove yourself, always to prove yourself.

She candidly recounts having at the time integrated the values of the community so much that even Minister of the Status of Women and mother of several children, she had never thought of claiming parental leave for elected officials (leave which still does not exist in 2020). “We hadn't thought of that. It's like that across the board, ”she laments, recalling that the politics of the time“ was a man's world. It is still, (but) a little less than before ”, according to the one which relies on a greater number of elected officials,“ the battle of my life ”, and solidarity between them to change things.

What then is the secret of its political longevity, despite the pitfalls? “My resilience and my consistency,” she says, or in more crude terms, her great ability to withstand blows and humiliations, which have not failed.

January 2001. Lucien Bouchard leaves political life: the post of Premier of Quebec becomes vacant. Bernard Landry positioned himself quickly and set up an organization. Faithful to herself on special occasions, she hesitates, procrastinates. She was then Minister of Health, and criticism came from all sides. She feels politically fragile. His colleague Minister François Legault, who is interested in leadership but considers the advance of Mr. Landry practically insurmountable, makes him a particular proposal: to form with him a “tandem”, a two-headed candidacy, the only possible way according to him to hope to beat. Landry. They agree to meet again to discuss it. A few days later, by chance, in a corridor, she crosses paths with Bernard Landry who tells her that Legault is lining up in his camp. Legault changed his mind, but he failed to inform him. She is devastated.

“Injured and angry, I isolated myself at home for four or five days, refusing even to answer the phone,” she recounts in her book. The days go by, she makes up for herself and gives up becoming leader to support Bernard Landry, who has free rein to become Prime Minister. His turn has not yet come.

Today, she says she has turned the page and refuses to blame François Legault, eternal rival that she did not hesitate to describe in 2012 as “big talker, little doer”, a man who was not reliable. .

Without wishing to elaborate, she nevertheless admits having “lived through difficult things” with him when she led the Parti Québécois, from 2007, after the departure of André Boisclair, and that Mr. Legault decided to leave the ship in 2009 , “When I needed him the most”.

In 2005, she made a second attempt to become a chef, but she was preferred André Boisclair, who was going to bite the dust in the 2007 election and resign. His turn had finally come, when support for the PQ was at its lowest.

The phobia of the referendum

After difficult years in the opposition and the resignation of several of its deputies, it managed to take power, but only barely in September 2012: the PQ has 54 seats, the Liberals of Jean Charest 50, the new CAQ of François Legault 19. Less than a percentage point of votes separates the PQ from the PLQ.

In March 2014, after barely 18 months at the head of a minority government, she no longer saw “a passageway” with the opposition, failed to get her laws and reforms passed, and decided to initiate general elections.

The 2014 campaign is trying. It becomes entangled in themes such as the army and the borders of a sovereign Quebec. “I shouldn't have” answered journalists' questions on the subject, she said today. But the damage is done, the rival parties make it the central issue of the campaign.

With hindsight, she now says she is convinced of one thing: in 2014, Quebecers did not vote for the Liberal Party of Quebec and its leader Philippe Couillard, they instead displayed their categorical refusal of a third referendum. .

Election night announces “a great sorrow of love”, while the PQ falls to 25% of support and loses 24 of its seats.

“It's not even the fear of sovereignty, it's the fear of being asked a question that would bring back the debate”, she is “deeply convinced”.

The lukewarm popular support for her party in 2012 can be explained in the same way, and she writes that she regrets not having understood it at the time.

The defeat of the PQ in 2014 also has nothing to do with the controversial Charter of Values, which was very popular, insists Ms. Marois, but which should have been called the Charter of State Secularism. 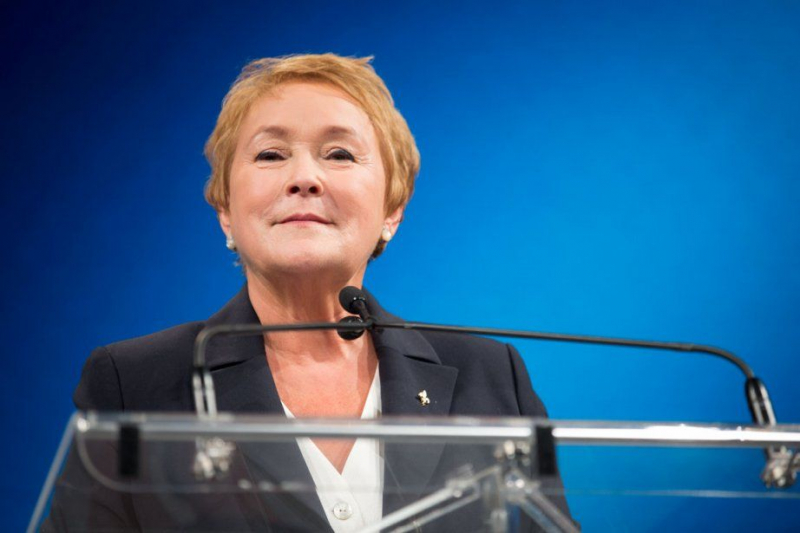 If we ask her what achievement to her credit she is most proud of, she does not hesitate and names the creation of Early Childhood Centers (CPE) at $ 5 per day in the Bouchard government.

At the time, sending her child to daycare “was very expensive”, prompting women to stay at home.

The social worker in her, who dreamed of “changing the world”, is never far away. She says she gets chills every time she broaches this subject, so in her eyes this project has played a key role in advancing the cause of women, helping to reduce child poverty and significantly increase the rate of childbirth. participation of women in the labor market, ensuring their financial independence.

“That's what I'm most proud of,” says the one we nickname “the mother of childcare centers”, one of whose “biggest regrets” is seeing this network unfinished.

After two referendum failures and repeated defeats of the Parti Québécois, she affirms that “at no time did I think that there was a better option for Quebec than its sovereignty”.

She says she still believes that Quebec could become a country. “As long as there is a vehicle, as long as people believe in it, the possibility of the country of Quebec will remain”, writes the one who says she is serene, always active, especially involved in the Foundation for the French language, of which she chairs the fundraiser.

Teilor Stone has been a reporter on the news desk since 2013. Before that she wrote about young adolescence and family dynamics for Styles and was the legal affairs correspondent for the Metro desk. Before joining The Bobr Times, Teilor Stone worked as a staff writer at the Village Voice and a freelancer for Newsday, The Wall Street Journal, GQ and Mirabella. To get in touch, contact me through my teilor@nizhtimes.com 1-800-268-7116
Previous ArticleDuclos, air traffic controller while waiting for the next electoral meeting
Next ArticleErin O'Toole expected to speak in Commons