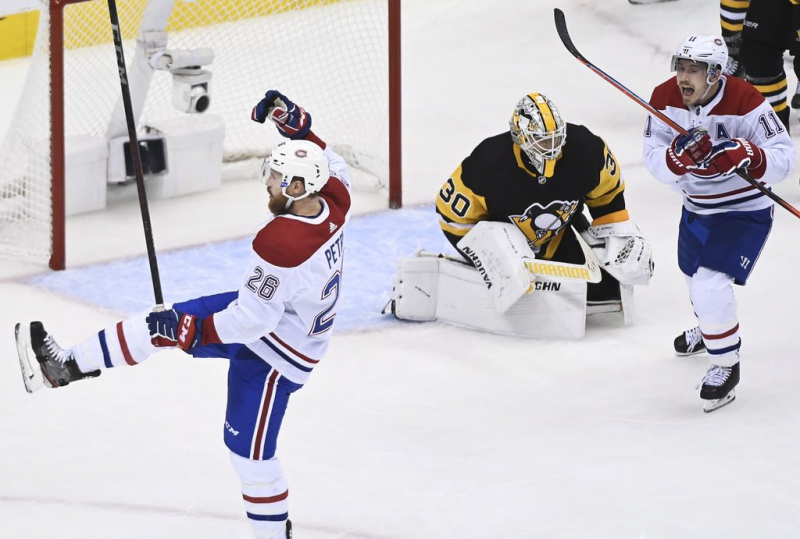 Share August 1, 2020 Updated August 2, 2020 at 12:44 am Share Petry slices into overtime and the Canadian wins the first game against Pens Alexis Bélanger-Champagne The Canadian Press TORONTO – Claude Julien said on Saturday noon that he did not have no choice but to trust the young players of the team. His players have given him back that confidence.

Nick Suzuki was possibly the Canadiens' best forward, while defenseman Jeff Petry played the heroes in overtime and the Montreal squad defeated the Pittsburgh Penguins 3-2, in the first meeting of their qualifying series.

Petry broke the deadlock at 1:57 p.m. of overtime, giving the Canadian victory in his first “that matters” game since March 10 due to the novel coronavirus pandemic.

The US defenseman recovered a free puck after a climb from Brendan Gallagher, dodged Brandon Tanev's slip and beat goaltender Matt Murray with a low shot from the shield side.

Jesperi Kotkaniemi scored the Habs' other goal, which won at Scotiabank Arena despite wasting a two-goal lead.

Carey Price was solid in goal for the Canadiens, especially early in the game, and turned away a total of 39 shots.

“The focus was there from start to finish. We were ready to do whatever was necessary to win, said Julien. In overtime, if you're afraid of losing, you're going to lose. If you are determined to win, you will win. That's what I told the players. ”

Sidney Crosby and Bryan Rust replied for the Penguins. Murray, who was ultimately preferred to Tristan Jarry by coach Mike Sullivan, turned away 32 shots.

The Penguins were 1-for-7 on the power play. Notably, they were unable to take advantage of a 1:32 two-man powerplay early in the third period. Since Phillip Danault was in the dungeon, Suzuki was Julien's trusted striker in this situation.

“(Suzuki) is a smart player and he attended our penalty killings meetings,” said Julien. He knew how the Penguins were going to take it five on three. He did a good job. Price made some big saves and our defenders did well too. The shorthand deserves a lot of credit for this victory. ”

The second game will be presented on Monday evening at 8 p.m.

The Canadian survived the storm early in the game. Gallagher took the first shot of the game, but the Penguins had the next 10.

Price had to be alert to prevent the Penguins from turning that advantage in the shots column into an advantage in the goals column. He notably made three difficult saves at the expense of Evgeni Malkin.

“I don't know if it was nervous, but the Penguins started the game strong,” noted Julien. Carey did a good job. He kept us in the game. He gave us a chance to get going. ”

The Habs then managed to better counter the efforts of the Penguins and calm the game. Then, Kotkaniemi opened the scoring at 11:27, when a shot from Brett Kulak deflected before hitting him in the chest and ending up in the 'goal. Murray couldn't help it on the streak.

Suzuki widened the lead at 6:53 of the second period with a precise throw in a two-on-one descent, but the Penguins regained control of the game afterward.

After a long streak in Habs territory, Crosby brought the Penguins back to just one goal behind their rivals at 9:55. Rust then tied the game at 12:34 on the power play, taking advantage of a free puck in front of Price.

Conor Sheary got a golden chance to play the hero with 3:03 left in the third period, earning a penalty shot. However, he missed the mark.

Jonathan Drouin also got a penalty shot at 6:46 into extra time, but lost control of the disc on the backhand shot.

Jeff Petry took advantage of his chance in overtime:

“We often talk about the importance for defenders to support the attack. When I saw the puck appear, I went for it. I took a second longer to free myself and I fired. ”

“He made some very important saves early in the game and played calmly, as he does so often. When the opposing team applies pressure, he is good at calming the game and the team. It helps everyone get into their game. ”

Nick Suzuki believes the Canadiens got a message:

“There aren't many people who see us as contenders. We want to show that we can compete with anyone. We have just taken a first step forward. (The Penguins) will come back even stronger in the next game. ”

Suzuki didn't flinch when Claude Julien sent him into the fray for a two-man shorthanded early in the third period:

“I had confidence and had two good defenders with me (Shea Weber and Petry). We've talked a lot about their power play. I had confidence. And it's nice to see that the coach trusts me in this type of situation. ”

Teilor Stone has been a reporter on the news desk since 2013. Before that she wrote about young adolescence and family dynamics for Styles and was the legal affairs correspondent for the Metro desk. Before joining The Bobr Times, Teilor Stone worked as a staff writer at the Village Voice and a freelancer for Newsday, The Wall Street Journal, GQ and Mirabella. To get in touch, contact me through my teilor@nizhtimes.com 1-800-268-7116
Previous ArticleNo need for a big speech before the first Canadian-Penguins match
Next ArticleJocelyn Thibault's intuition pays off