Pierre Fitzgibbon rejects the blame pronounced by the Ethics Commissioner 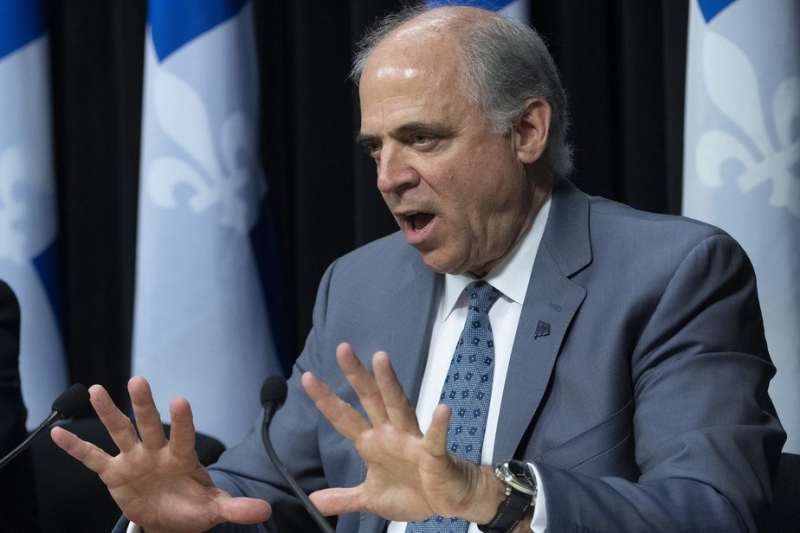 At the Salon Bleu, on Wednesday morning, Pierre Fitzgibbon took advantage of the right to speak made available to him the day before the vote to give his version of the facts, in the hope of preserving his reputation with elected officials.

Share November 11, 2020 2:11 p.m. Share Pierre Fitzgibbon rejects the blame pronounced by the ethics commissioner Jocelyne Richer The Canadian Press The Minister of the Economy, Pierre Fitzgibbon, on Wednesday rejected the severe blame pronounced by the ethics commissioner to his place, believing to have nothing to be ashamed of.

But his opposition will not change anything as a result of things, because everything indicates that, exceptionally, the National Assembly will sanction Minister Fitzgibbon with one voice, Thursday, during a vote in the House.

Whatever he thinks, Mr. Fitzgibbon, who will not be present at the Blue Room at the time of the vote, will therefore have to cash on Thursday a humiliating lesson served by his peers.

At the Blue Room, on Wednesday morning, Mr. Fitzgibbon took advantage of the right to speak made available to him the day before the vote to give his version of the facts, in the hope of preserving his reputation with elected officials.

He admitted to finding it “difficult” to have to deal with a reprimand questioning his ethics. In detail, point by point, he denied the conclusions of the commissioner in each of the three disputed files.

According to the rules in force, two-thirds of the deputies must approve the conclusions of the ethics commissioner so that her recommendation turns into formal censure of the National Assembly.

But little doubt remains about the outcome. Acknowledging that his minister had been reckless, Prime Minister François Legault said last week that his caucus of deputies, which forms the majority of elected officials, would vote in favor of the commissioner's recommendations, as would elected members of opposition parties.

In her report, made public on October 29, Commissioner Ariane Mignolet deplored both the snags in the code of ethics of parliamentarians in the behavior of the minister, as well as his reluctance to want to change.

She criticized him above all for being too close to one of his entrepreneur and lobbyist friends, Luc Laperrière, who was entitled to privileged access.

In her report, the Commissioner concluded that Mr. Fitzgibbon had placed himself in a situation where his personal interest could influence his independence of judgment in the exercise of his office, because of his close, friendly and financial ties with Mr. Laperriere.

The latter, who had direct access to the minister while promoting projects to the government, agreed to acquire shares in the company Move Protein, which Mr. Fitzgibbon was to dispose of. He did so at Mr. Fitzgibbon's request, to be of service to him.

“The fact that a lobbyist, bound by a great relationship of friendship with a member of the Executive Council, and who agrees to buy him shares of a company as a service to him, can communicate directly with him in order to Organizing professional meetings harms the maintenance of the confidence of the population towards 1/8? 3/8 democratic institutions ”, she wrote.

“When you hold a position like that of minister, it is essential to clearly draw the line between your personal and professional relationships. In light of the above, I recommend that a reprimand be imposed on the Minister, ”she concluded.

M Mignolet also deplored in his report to see Minister Fitzgibbon react to his conclusions by considering that he had nothing to be ashamed of. “I do not denote any real desire to change,” she wrote, adding that her attitude had contributed to her decision to recommend a sanction.

On Wednesday, Mr. Fitzgibbon maintained that he had always acted in the interest of the economic development of Quebec, only.

In each of the problem cases raised by the Commissioner, the Minister considers that he “acted in good faith and above all ethically”, he declared in the House, adding that he never placed himself in a situation of conflict of interest.

Mr. Laperrière “has not received any preferential treatment because of our friendly relationship,” said the Minister of the Economy, who assures that he has never interfered in the administrative process of project evaluation. There was no embezzlement of any kind in the management of these projects, he insisted.

In conclusion, with lip service, he admitted all the same that he should be more careful in the future, refraining from speaking to lobbyists “who are in debt to me”.

Teilor Stone has been a reporter on the news desk since 2013. Before that she wrote about young adolescence and family dynamics for Styles and was the legal affairs correspondent for the Metro desk. Before joining The Bobr Times, Teilor Stone worked as a staff writer at the Village Voice and a freelancer for Newsday, The Wall Street Journal, GQ and Mirabella. To get in touch, contact me through my teilor@nizhtimes.com 1-800-268-7116
Previous ArticleVoting intentions in Canada: virtual equality between Liberals and Conservatives [VIDEO]
Next ArticleThe Legault team: a government of “uncles”, according to the liberal opposition