Sacrificing your water to sell your wood: the trickery of Quebec 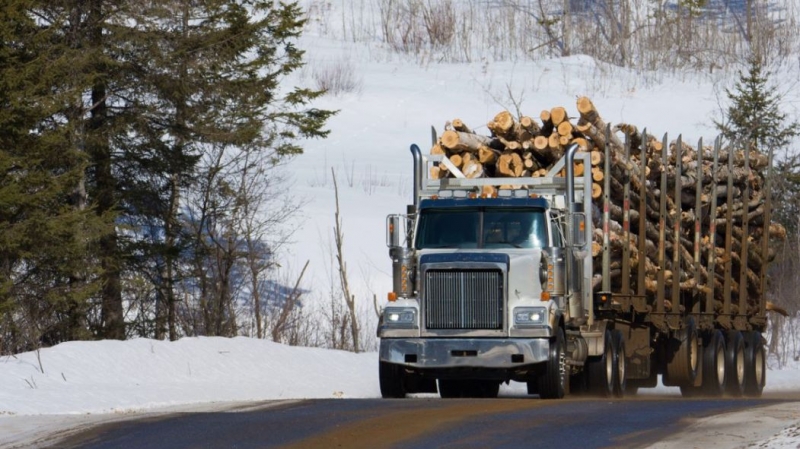 By dispensing with a management plan for forest roads, Quebec and the forestry companies exploit the public forests of the State and achieve savings to the detriment of the protection of aquatic environments. Here is an analysis by Sylvain Jutras, Full Professor at Laval University.

ANALYSIS – For more than 25 years now, the Quebec Ministry of Forests, Wildlife and Parks has found a very effective way to increase its forestry competitiveness compared to other Canadian provinces.

By deciding not to implement a forest road management plan since the mid-1990s, the Government of Quebec and the forestry companies operating the State's public forests have made significant savings, to the detriment of the protection aquatic environments for future generations. Indeed, the abandonment of these roads after their use is a practice that seems to be common and legal only in Quebec, which today causes a direct threat to the quality of the water, caused by the erosion of roads and culvert backfill washout. These failures gradually lead to tons of sediment in aquatic environments.

Full professor, specializing in forest hydrology at Laval University, my knowledge of Quebec forestry is broad and in-depth, ranging from scientific, technical and operational aspects to legislative and political details. What leads me today to expose this deplorable situation is the recurring observation of the powerlessness of hundreds of stakeholders with whom I have discussed water issues in Quebec's forest environment. Exposing the Quebec government's cheating on other Canadian provinces is possibly the only way to really change things.

The immense territory of boreal forests and the gigantic volumes of wood found there are essentially located on public lands.

The resources found there, such as wood, fauna, flora, landscapes and water, are therefore collective, since they belong to all the citizens of each province. Each provincial government manages them, through laws and regulations, but also by collecting royalties from companies that exploit and transform these resources into products that are very useful to our societies, such as renewable building materials, paper and cardboard, and bioenergy.

Going to harvest these resources in remote areas and transporting them to processing plants requires the development of an immense road network adapted to this task, which are called forest roads. Quickly built with mechanical shovels and bulldozers, with earth, gravel and stones found on site or nearby, these paths essentially use culverts to cross the countless waterways that cover the territory. /p>

A very small proportion of these roads are wide, well gravelled and frequently maintained to allow quick and safe travel. These are also used as the main framework for access to the territory and its resources. However, the vast majority of public forest roads are intensively used for very short periods of time, ranging from a few months to about ten years.

Sound management of a network of forest roads should therefore take this important feature into account. It is also through management plans that forest roads are administered throughout Canada, except in Quebec, where they do not exist. These plans frame the deployment and construction of the main road network, as well as the maintenance, decommissioning and closure of forest roads in the short, medium and long term.

The Quebec ministry responsible for forests has been applying a strong and robust regulatory framework for several decades with regard to the construction of forest roads in public state forests. Built almost solely for the primary purpose of allowing the extraction of ligneous matter, it is now more than 476 000 km of roads that have been heavily subsidized by the Quebec state in recent decades. That's enough paths to circle the Earth almost 12 times.

Since these paths become legally public as soon as they are built, they are accessible to all users and for all possible uses. Completely out of step with the severity of the regulations during construction, there are, for all practical purposes, no regulations related to the maintenance of these forest roads thereafter. The forestry regime currently in place completely relieves forestry companies of the need to maintain or close these public roads when their forestry activities are over.

Thus, the government of Quebec has long hoped, without ever devoting any real effort to supervision or coordination, that these secondary users would maintain this network of roads built with our public funds. However, it has been shown that barely 25% of these paths are maintained in the years following timber extraction. And nearly 35% of all public logging roads have simply been abandoned, without decommissioning, closure, and maintenance for decades.

Yet the science is unequivocal: the failures of poorly maintained road structures are the source of significant threats to aquatic environments. This results in massive sediment inputs, damage to aquatic habitats, obstacles to the free movement of fish and, of course, restrictions on access to the territory and its resources.

Elsewhere in Canada , substantial and recurring amounts have been invested each year for decades to maintain, decommission or close thousands of kilometers of roads. During this time, Quebec invested only derisory amounts in them and allowed these structures to slowly deteriorate.

Quebec does not respect the rules of the game

This deplorable situation was very clearly denounced in 2010 by the office of the Chief Forester, in its report on sustainable forest management in Quebec. But the coming into force of the Sustainable Forest Development Act in 2013 meant that the Chief Forester of Quebec was stripped of his role in overseeing sustainable forest management. Since then, it no longer has the tools nor the independence necessary to assess the water conservation issues caused by the absence of a management plan for forest roads in Quebec.

Thus, for more than a decade, it has been clear that the deliberate laxity of the management of public forest roads by the Government of Quebec is to the detriment of the protection of aquatic environments for future generations. This way of doing things goes directly against the founding principles of the concept of sustainable forest management, which is clearly stated in the laws in force in Quebec and Canada.

Wood from public forests in Quebec was unfortunately not harvested by respecting the rules of the game that all Canadian provinces had nevertheless agreed to respect. Until the government of Quebec accepts responsibility for abandoned logging roads, allows an independent evaluation of the water conservation criteria to be carried out and puts in place a real management policy forest roads, this situation will only get worse.

Water is an invaluable resource. It is time that the bodies that must ensure its protection, such as forest certification bodies and the federal and provincial departments of the Environment, act in the forest environment in Quebec.

Teilor Stone has been a reporter on the news desk since 2013. Before that she wrote about young adolescence and family dynamics for Styles and was the legal affairs correspondent for the Metro desk. Before joining The Bobr Times, Teilor Stone worked as a staff writer at the Village Voice and a freelancer for Newsday, The Wall Street Journal, GQ and Mirabella. To get in touch, contact me through my teilor@nizhtimes.com 1-800-268-7116
Previous Article13 million cubic meters of untreated water will be discharged into the river
Next ArticleHaunted by the refugees encountered in Ukraine