Speech from the Throne: a million jobs promised 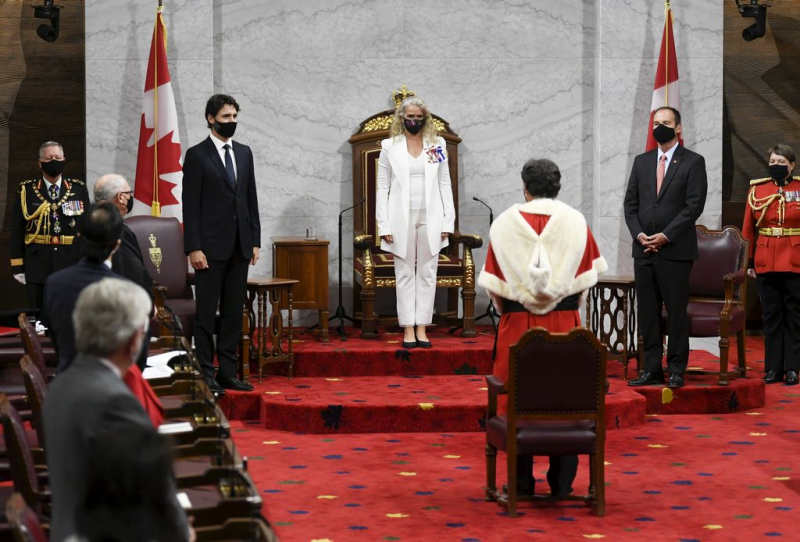 The Governor General delivered the Trudeau government's Speech from the Throne on Wednesday afternoon to open the Second Session of the 43rd Parliament.

The Governor General delivered the Trudeau government's Speech from the Throne on Wednesday afternoon to open the Second Session of the 43rd Parliament.

As expected, the fight against the pandemic occupies a large place there, it is the first of “four pillars” presented in this speech. The other three pillars: economic support as long as the pandemic lasts, reconstruction of a “stronger and more resilient” Canada where we talk about “clean growth” and the defense of “Canadian values” where we include, among other things, the fight against racism.

“Protecting Canadians from COVID-19” is “the top priority”, read Julie Payette in the text drafted by the government of Justin Trudeau.

“The federal government will be there to help the provinces increase their screening capacity,” said Ms. Payette, at a time when long waits in line to receive a test are being denounced in Ontario and Quebec.

The federal government promises “additional financial assistance” and direct to businesses which are forced to close because of a decision of the local public health authorities.

It is also announced that there will be measures for “industries hardest hit” by the pandemic, citing the hospitality, tourism, travel, and performing arts industries.

And then, to recover after this pandemic, he will launch “a campaign to create more than a million jobs”. Ottawa is calculating that all the jobs lost with the coronavirus will be recovered in this way.

To meet this goal of one million jobs, the Canada Emergency Wage Subsidy will be extended “until next summer.”

“The government will ensure that everyone (…) has access to a family doctor”, also promises the federal government, while this is under provincial jurisdiction. And in the same vein, he is not using his speech to respond to the provinces that are demanding an increase in health transfers.

On Friday, the Premier of Quebec, François Legault, and three of his counterparts made the trip to Ottawa to demand that as of next year, transfers go from the $ 42 billion planned to $ 70 billion. This would bring the federal contribution to 35% of health care costs.

The speech, however, is careful to reiterate that the federal government intends to work with the provinces to establish “new national standards for long-term care so that the elderly receive the best possible support.”

All of these intentions have already been announced since the 2019 election.

“A good example of adaptation to a carbon-neutral future lies in the construction of zero-emission vehicles and batteries”, recalls the speech, highlighting the presence of nickel and copper in the country, a “competitive advantage” for producing clean technologies.

Past and future commitments

The speech echoes a whole series of commitments from the Liberal government.

Thus, he promises to “speed up” his response to the “calls for justice” resulting from the National Inquiry into Missing and Murdered Indigenous Women and Girls. He assures that he will present a bill “before the end of the year” to implement the United Nations Declaration on the Rights of Indigenous Peoples.

He repeats that he will “strengthen” the Official Languages Act, specifying that he will then take into account “the particular reality of French”.

He again promises to tackle “systemic racism”, but while dangling a series of new measures, speaks of a modernization of police training and greater civilian oversight of the Royal Canadian Mounted Police (RCMP ).

The minority Liberal government also does not forget to reiterate its commitments for drug insurance demanded by the New Democrats since the 2019 election, or for “full and fair compensation” for workers subject to management. of the offer demanded by the Bloc.

It also brings back its promise of a “Canada-wide” child care system. Quebec will serve as a model for him, he promises. Quebec will claim, and expect to obtain, a right to opt out with compensation.

“Canadians should not have to choose between their health and their work,” said the speech, without specifically committing to impose the 10 days of paid sick leave, which the New Democratic Party (NDP) is calling for.

Teilor Stone has been a reporter on the news desk since 2013. Before that she wrote about young adolescence and family dynamics for Styles and was the legal affairs correspondent for the Metro desk. Before joining The Bobr Times, Teilor Stone worked as a staff writer at the Village Voice and a freelancer for Newsday, The Wall Street Journal, GQ and Mirabella. To get in touch, contact me through my teilor@nizhtimes.com 1-800-268-7116
Previous ArticleLiving with COVID-19, Conservative leader will not respond to Trudeau
Next ArticleSpeech from the Throne: the fate of the Trudeau government still uncertain