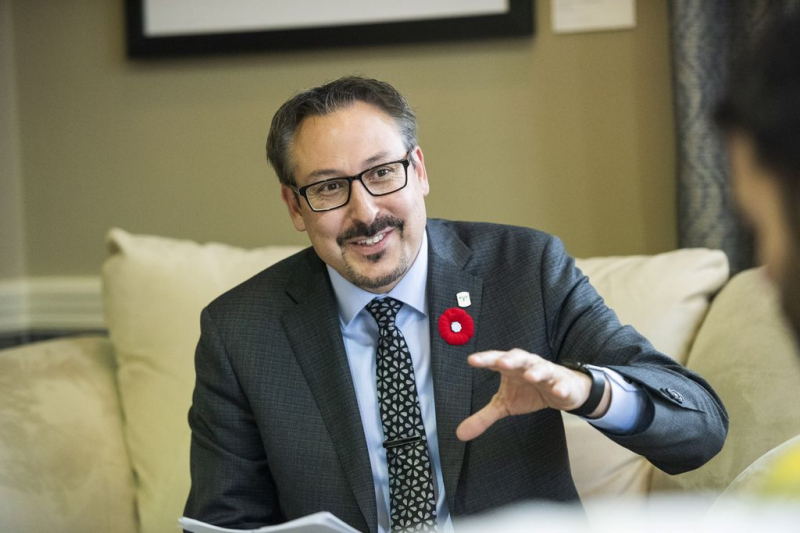 Steve Lussier: “I am very close to entrepreneurs and promoters. If anyone meets them, it's me. The City has never developed at such speed. That's what sets me apart the most from the rest and that's why I want to serve a second term. “

Jonathan Custeau La Tribune One year before the municipal elections, La Tribune paints a portrait of Sherbrooke's political scene in addition to offering an interview with Mayor Steve Lussier and with the designated opposition leader, Évelyne Beaudin.

Mayor Steve Lussier had promised he would limit himself to two terms. It is therefore no surprise, after three years in power for a first term, that he announced that he wanted the Sherbrooke residents to renew their confidence in him to ensure continuity. The creation of an innovation zone in quantum science, which he wants in the next year, could be the cornerstone for a second term.

He asserts it as obvious: it is again as independent that he will present himself to the voters. “Sherbrooke remains an inspiring and prosperous city where life is good. I want to develop our knowledge. I am here to support the population in prosperity. The momentum is very good. We must not lose it. “

Mr. Lussier promises important announcements in the coming weeks. The innovation zone, a creation of the Ministry of Economy and Innovation that the government was to designate before the pandemic, is still awaited. This aims to position the region advantageously, as a specialist in quantum science, in anticipation of foreign investment. “We expect to hear from you very soon. It is a file that we have put together well. We will succeed. We aim to retain knowledge, particularly that of our two universities. “

For the mayor, “the innovation zone will make a big difference in our city”. In the plans filed in January, it is divided into three distinct sectors, namely that of the University of Sherbrooke, the innovative manufacturing sector, along the Magog River, between the Lucien-Blanchard beach and Belvédère Sud street, and the downtown, which includes the Cégep de Sherbrooke and the area to be redeveloped after the construction of the Grandes-Fourches bridge. The area where Nikitotek Square was located is referred to as the “TI Zone”.

According to Steve Lussier, it will therefore be an industrial park 2.0. which, like the regional industrial park, will attract businesses. “For the industrial park, I went abroad to look for companies. I did growth differently. I am very close to entrepreneurs and promoters. If anyone meets them, it's me. The City has never developed at such speed. That's what sets me apart the most from the rest and that's why I want to serve a second term. “

Among the other news expected by the end of the mandate: improvements to rail transport. The passenger train project between Sherbrooke and Montreal has made less noise in the past year. ” We are on the right path. We will probably have some nice announcements with the railway alliance. I also want to solve the problem of the marshalling yard. I am active on this subject with the mayoress of Magog. “

Steve Lussier wants to move the activities of the marshalling yard from downtown Sherbrooke to Magog.

Regarding transparency, Mr. Lussier denies hiding information. “Transparency is there more than ever,” he says, even though the number of public plenaries is lower under his administration. “People have access to all the documentation. We are very open for public plenaries. We do webcast consultation evenings for several files. “

The entire city council was, however, tainted for stories of minutes retained to prevent journalists from seeing the dissensions at Destination Sherbrooke. “Our Legal Affairs Department is working to improve minutes practices. We are also working on new methods to facilitate written consultations. “

As for the reform of the committees, expected this year to lighten the task of elected officials, it will not be carried out before the next term. The previous administration had refused to take a decision to leave room for the newly elected officials to determine their own way of organizing work. A report was commissioned from former councilor Bernard Tanguay, who clearly recommended reducing the number of committees in Sherbrooke.

“If we hadn't had the pandemic, the document was ready. At the request of elected officials, I resumed work. There won't be a lot of cuts. There are some that we will not be able to do in this mandate. In a few weeks, we will be able to table a proposal, ”says Lussier.

This is a change of course after he announced that no changes could be made in the current mandate.

Finally, Steve Lussier proposed last February a reform of electoral signage to reduce pollution, either by designating specific places to install the said signs and by limiting the number of them. Will he lead by example using fewer posters ahead of the November 2021 election? “I will wait to see what the Chief Electoral Officer (DGEQ) thinks about it and then I will submit the idea to city council so that we can find an ecological display. “

Mr. Lussier says he sent a document to the DGEQ and he knows that the idea is not unanimous with the other mayors of the province. “Some people are very reluctant, but I hope we will get there in the medium term. “

Teilor Stone has been a reporter on the news desk since 2013. Before that she wrote about young adolescence and family dynamics for Styles and was the legal affairs correspondent for the Metro desk. Before joining The Bobr Times, Teilor Stone worked as a staff writer at the Village Voice and a freelancer for Newsday, The Wall Street Journal, GQ and Mirabella. To get in touch, contact me through my teilor@nizhtimes.com 1-800-268-7116
Previous ArticleBeaudin believes he has interested citizens in politics
Next ArticleSPS ends a party