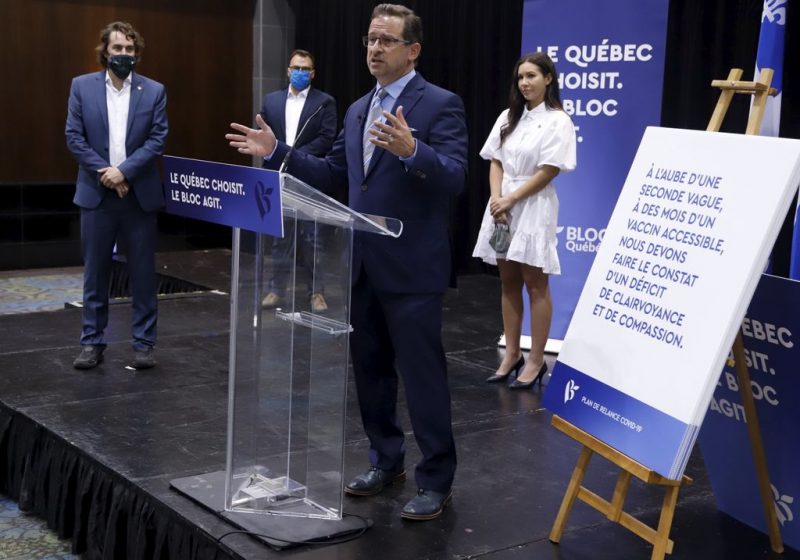 The document is titled “Le Québec chooses. The Bloc is taking action. ” In the introductory word, signed by chef Yves-François Blanchet, he said he wanted to “act” and bring “a positive vision of Quebec”.

Entitled “Quebec chooses. Le Bloc acts ”, the 20-page document addresses issues of health, public finances and the fight against climate change. It was produced after the Bloc's summer tours to the four corners of Quebec.

It was supposed to be made public two weeks ago, before the Speech from the Throne, but the administrative segregation of almost all Bloc members and their leader's positive test complicated matters.

Ignoring these deadlines, Mr. Blanchet presented the document prepared by his party as being “infinitely more precise than the Speech from the Throne” and invited the other political parties to draw inspiration from it freely.

The Bloc demands to “put an end to the model of dependence on hydrocarbons in order, on the contrary, to promote the transformation of our wealth in Quebec”, we can read.

It is proposed to “invest in the transformation in Quebec of natural resources and the enhancement of the environment in Quebec”, such as renewable energies, forestry, wastewater management and research and development. In particular, money will have to be injected to promote the electrification of transport and facilitate the purchase of zero-emission or hybrid vehicles.

In return, Ottawa will have to stop investing, through subsidies or tax benefits, in fossil fuels in Western Canada. The Bloc would, however, support “significant assistance” to help Alberta move towards a “model of sustainable wealth creation”.

The Bloc would like the creation of a commission of inquiry into the pandemic, “in particular to assess the federal government's level of preparedness, its level of alignment with the World Health Organization (WHO) as well as the efficiency in the detail of its economic response ”.

Unsurprisingly, the Bloc rallies to the provinces' demand and demands that the federal government unconditionally increase its contribution to health transfers so that it covers 35% of total spending.

The Bloc asks the federal government to “provide projections of public finances for the next three years as soon as Parliament returns”, with the tabling of a budget. For now, an economic update is scheduled to be tabled this fall.

In the column of new revenues, the Bloc proposes to put an end to tax avoidance by large companies and to force web giants to collect GST on their services.

The Bloc would like to “permanently increase Old Age Security by $ 110 per month from age 65 and adapt the guaranteed income supplement so as not to penalize anyone”. For now, Ottawa intends to improve the pension for seniors aged 75 and over only.

It is also proposed to automatically grant the tax credit for home care, as is done in Quebec.

The Bloc suggests not only offering targeted financial support for the aerospace industry, but implementing a national strategy to help this sector.

It is also asking the federal government to spend 1% of its income on housing.

Quebec flagships weakened by the pandemic should be protected against foreign takeovers, according to the Bloc, by more actively using the Investment Canada Act and by entering into negotiations with Quebec to amend the Business Corporations Act.

Teilor Stone has been a reporter on the news desk since 2013. Before that she wrote about young adolescence and family dynamics for Styles and was the legal affairs correspondent for the Metro desk. Before joining The Bobr Times, Teilor Stone worked as a staff writer at the Village Voice and a freelancer for Newsday, The Wall Street Journal, GQ and Mirabella. To get in touch, contact me through my teilor@nizhtimes.com 1-800-268-7116
Previous ArticleErin O'Toole expected to speak in Commons
Next ArticleThe very first electronic vote in the Commons plagued by technical glitches