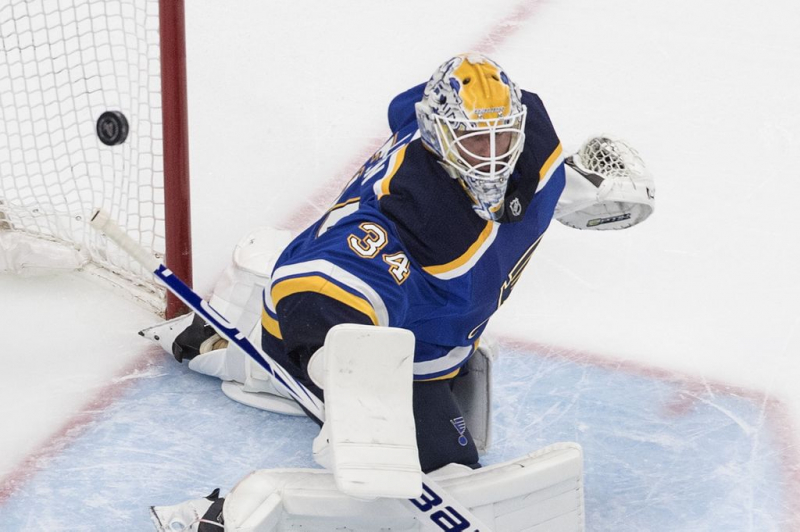 Share September 2, 2020 1:12 p.m. Updated at 4:44 p.m. Share The Canadian acquires goalie Jake Allen The Canadian Press Unlike many athletes who have to familiarize themselves with a completely different environment and role following a trade, goalie Jake Allen shouldn't be too lost when he shows up at the next Montreal Canadiens training camp. He lived in the city for two years – over ten years ago, it is true – and since 2019, he has become familiar with the job that we want to give him.

General manager Marc Bergevin may have found the rare pearl that will allow Carey Price to breathe a little next season thanks to the acquisition of Allen, announced on Wednesday.

The picks traded to the Blues had previously been acquired in the deal sending Ilya Kovalchuk to the Washington Capitals and in the one sending Andrew Shaw to the Chicago Blackhawks.

Allen's arrival fills a crying need that Bergevin identified during his recent end-of-season review; find an assistant goaltender who is reliable and can support Price.

Allen was 12-6-3 with a 2.15 goals-against average and .927 save rate, in addition to recording two shutouts in 24 games last season with the Blues.

The 30-year-old goaltender, who is from Fredericton, NB, also posted a 2-1-1 record with a 1.89 goals-against average and .935 save rate. in five playoff games this summer.

“My role, of course, will be to support one of the best goalies in the world, a dominant force in the league, and to bring a little more confidence to the team. I consider that I have successfully occupied this role behind (Jordan) Binnington, and I think I have had a solid season, ”Allen said on a conference call with Montreal media Wednesday afternoon.

“I've been playing in the league for several seasons and I've had experiences in different situations,” he added. In this role, I think I can give Carey the breaks he needs, and play well for the team. It's a challenge and an opportunity that I can't wait to take on. ”

To his credit, Allen managed to adapt to a changed role with the Blues following Binnington's emergence in 2019. Coming out of nowhere, the latter imposed himself to the point of leading them to the first conquest. of the Stanley Cup in their history.

“My role was changed and I had the choice to accept it and excel at it, or not. Last year is a perfect example; it's about doing what the team needs, putting the team ahead of yourself. It's being a real team player and positive every day on the ice. And when opportunities arise, it's about making the most of them. You have to know your role and your position, ”he explained.

This exchange with the Canadian brings Allen back to a hometown that is not unknown to him, since he wore the colors of the Montreal Juniors, in the QMJHL, in 2008 and 2009.

During his first season with the Juniors, Dominique Ducharme and Joël Bouchard played the roles of assistants to Pascal Vincent. The following season, he spent time with defenseman Xavier Ouellet.

“It's funny how I feel like I've come full circle, having played with the Montreal Juniors in Verdun, then in the NHL against the Canadiens and at the Bell Center. I had some experiences in this building, I lived in the city for a couple of years. There is a certain familiarity, and there are still people that I have kept in touch with in the city. It's a place that is more familiar to me than most others in the league. ”

Allen thinks this is something that will facilitate his adaptation.

“When you come into a new team, a new organization, a little familiarity makes things a little more comfortable. I lived in Notre-Dame-de-Grâce, I played against the Canadian, I spent time in the city during the off-season. ”

“A new market and a new environment are things that you have to approach with optimism,” he also noted. It's gonna be interesting, it's gonna be fun, it's gonna be a challenge. There will be good days and bad days. What matters is to cherish this opportunity that is offered to me and to move forward. ”

On the other hand, Allen admits that he has absolutely no knowledge of Price. This does not prevent him from having him in very high esteem.

“What I admire (at Price) as a goalie is the fact that he's been in the league for so long and hasn't really changed his style of play. I think that it shows how good he is. “

Allen, who was drafted in the second round, 34th overall, by the Blues in the 2008 NHL Draft, will carry fond memories of his seasons in St. Louis, both personally and professionally.

“St. Louis is an important part of my life. My children were born there, I won the Stanley Cup, I had many beautiful years and I made a lot of good friends. St. Louis has given me a lot. I'm grateful for that and now I have a new opportunity ahead of me. “

Teilor Stone has been a reporter on the news desk since 2013. Before that she wrote about young adolescence and family dynamics for Styles and was the legal affairs correspondent for the Metro desk. Before joining The Bobr Times, Teilor Stone worked as a staff writer at the Village Voice and a freelancer for Newsday, The Wall Street Journal, GQ and Mirabella. To get in touch, contact me through my teilor@nizhtimes.com 1-800-268-7116
Previous ArticleClaude Julien is fine and ensures that he will be back
Next ArticleCanadian secures defenseman Joel Edmundson from Carolina Hurricanes