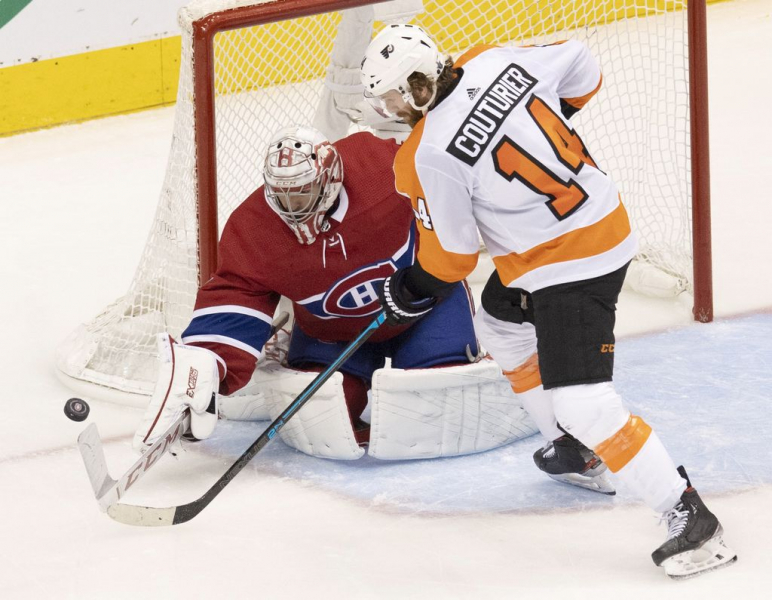 The Montreal Canadiens lost 3-2 to the Philadelphia Flyers on Friday and were eliminated from the NHL playoffs.

Share August 21, 2020 Updated August 22, 2020 at 1:02 am Share The Canadian loses Game 6 3-2 and is eliminated by the Flyers Alexis Bélanger-Champagne The Canadian Press TORONTO – The members of the Canadiens who presented themselves at the Scotiabank podium Arena after the elimination of the Montreal formation did not look low. On the contrary, they believe the Habs have shown that they are ready to compete with the best teams in the NHL.

The Philadelphia Flyers ended the Canadiens' adventure in the NHL bubble in Toronto on Friday. They finished off their rivals by winning Game 6 of their Eastern Conference quarterfinal series by a score of 3-2.

The Canadian, who surprised the Pittsburgh Penguins in the qualifying round, will therefore be leaving the Fairmount Royal York hotel on Saturday, 27 days after his arrival.

“The guys worked hard for every goal, trying to win every game. It was a group effort, said the Canadiens' interim head coach Kirk Muller. Our young people have progressed and our veterans have shown how much they love the group and want to help it. I am proud of our group. ”

The Flyers, who won their first series since 2012, will face the New York Islanders in the Eastern semi-finals.

Ivan Provorov and Kevin Hayes helped the Flyers take control of the decisive game by scoring on favorable puck deflections on some Canadiens players early in the game. Michael Raffl was also credited with a goal, while Carter Hart rejected 31 shots.

“It was not an easy series in a way because we were the favorites, nobody gave the Canadiens a chance,” said Flyers head coach Alain Vigneault. It was a mental challenge. We got over it, we learned to win, to play the right way and we did it as a team. ”

Nick Suzuki sounded the charge for the Canadian with two goals, each time on assists from Joel Armia and Jonathan Drouin. Carey Price made 14 saves.

“In the two rounds I think we showed we can compete with the top teams,” said Muller. We are counting on several good elements. It's amazing how quickly anything can fall into place. As much as we are disappointed this evening, we are also optimistic for the future. ”

For this short-lived duel, the Canadian was deprived of one of his leaders: Brendan Gallagher. The latter suffered a broken jaw when he suffered a double-check from Matt Niskanen in Game 5 on Wednesday. Niskanen was suspended for a game for his gesture.

In the absence of Gallagher, Alex Belzile was back in the formation of the Canadian. On the Flyers side, Shayne Gostisbehere replaced Niskanen on the blue line, while forward James van Riemsdyk was back in uniform in place of Connor Bunnaman.

The Canadian could hardly have imagined a worse scenario early in the game, as the Flyers scored twice on their first three shots, each time during a deflection on Habs players.

Provorov opened the scoring after 28 seconds of play, when his pitch deflected off Shea Weber's stick. Hayes widened the gap at 5:23, when his throw to the net hit Artturi Lehkonen's stick before slipping through Price's pads.

The Canadian replied at 10:03 on the power play. Suzuki backhanded after collecting a loose puck in front of Hart's net.

Price was vigilant thereafter, helping his side to pass two penalties before the end of the first period. He notably frustrated van Riemsdyk at close range. He also played luck early in the second period, when Travis Konecny missed the mark on a breakaway.

The Habs keeper was helpless at 4:26, however, when a throw from Travis Sanheim on a redundant attack deflected on Raffl, hit the post, then bounced off him before crossing the goal line.

Once again, Suzuki stepped in, closing the gap 1:39 later. He took advantage of a perfect throw from Drouin to outsmart Hart from a difficult angle.

The Flyers had their best five-on-five moments early in the third period, delaying the Habs' final assault for as long as possible.

The Canadian came closest to the tie with 6:49 to go, when a shot from Tomas Tatar hit Hart's stick shaft before going out of bounds.

Shea Weber believes the Canadiens have proven to be better than many thought:

“Everyone was doubting our abilities, but we came here after a short summer with a goal in mind. We have shown that we are closer (to being top contenders) than people think. We can be proud of what we have accomplished. ”

Nick Suzuki was happy with the effort made by the Canadian on Friday, but not with the result:

“Luck played against us, but we played hard for 60 minutes. We have generated opportunities. The victory could have gone one way or the other. ”

Jonathan Drouin admitted that he had fun living in the NHL bubble:

“It's not easy to play hockey during a pandemic. It was different, but we had fun all together in the living rooms. There were 10 guys in one room and 10 in the other. It was “cool”. We will never forget that. ”

Teilor Stone has been a reporter on the news desk since 2013. Before that she wrote about young adolescence and family dynamics for Styles and was the legal affairs correspondent for the Metro desk. Before joining The Bobr Times, Teilor Stone worked as a staff writer at the Village Voice and a freelancer for Newsday, The Wall Street Journal, GQ and Mirabella. To get in touch, contact me through my teilor@nizhtimes.com 1-800-268-7116
Previous ArticleTwice entrenched in the midget AAA, Roy enters the QMJHL
Next ArticleThe Canadian lived “an experience that is priceless”, believes Bergevin