The Canadian picks up defenseman Kaiden Guhle in 16th place 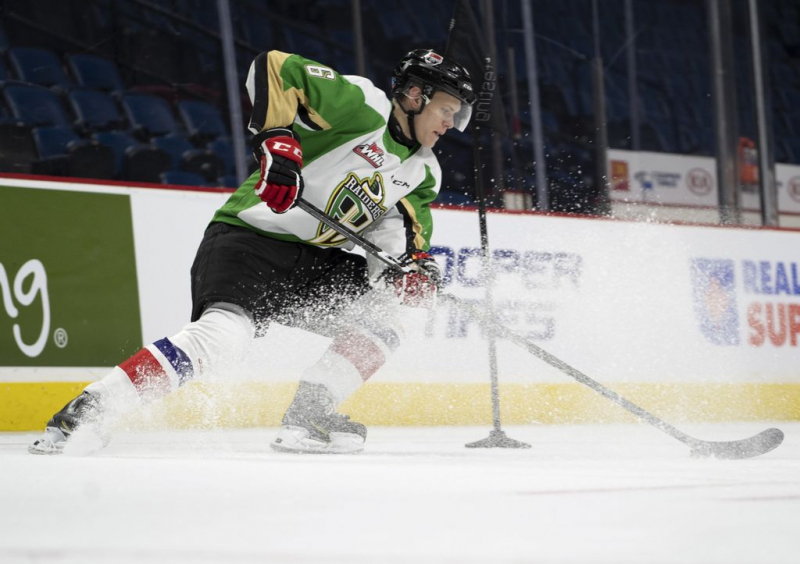 Kaiden Guhle is a six-foot-two, 186-pound colossus who was ranked eighth among North American skaters by NHL Recruiting Central.

Guhle is a six-foot-two, 186-pound colossus who was ranked eighth among North American skaters by NHL Recruiting Central. He scored 11 goals and 29 assists in 64 games last winter.

He is known for his skating and his tendency to give good shoulder thrusts in the center of the ice, in addition to his ability to support the attack. Some observers saw him coming out late in the top 10.

“I just think about winning,” said Guhle, who won the WHL championship with the Raiders in 2018-19. I will do anything to win. It's the best thing in the world. I want to win every night. That's why I play like that. ”

Guhle's brother Brendan played 59 NHL games, including 30 with the Anaheim Ducks last winter, after being selected in the second round, 51st overall, in 2015 by the Buffalo Sabers.

“Brendan and I hate to lose,” said Kaiden Guhle. I don't want to look bad in front of my older brother and he doesn't want to be taught a lesson by his younger brother. We spend a lot of time together on the ice and in the gym and we are always competing against each other. We hate to lose. ”

A native of Sherwood Park, Alta., Guhle said he had no particular childhood idols. He admitted, however, to enjoying watching Weber in action.

“I think I got my mean side of him,” Guhle said. I also like to watch how other players skate. ”

Guhle is led by Marc Habscheid for the Raiders. Habscheid also coached Canadiens captain Shea Weber for two of his three seasons with the Kelowna Rockets.

“I'm sure we'll talk about it if we get a chance to chat a bit,” Guhle said. I am also looking forward to meeting Carey Price. There are several good players in this team. ”

“I think I got my mean side of him” – Kaiden Guhle, on Shea Weber

Guhle, who is 18, is realistic, however. He knows it would be surprising if he carved out a job with the Canadian from the next camp. He believes, however, that his brother will be able to help him prepare for the next level after the end of his internship in the junior.

“I have to improve my decision making under pressure with a puck, get rid of it less often,” he said. I also think I can improve my attacking game. ”

The Canadian has a relatively aged defensive squad, starring Weber, 35, and Jeff Petry, 32. Alexander Romanov, who is 20, is expected to play for the Habs this season. If Victor Mete is left out of the squad, the next youngest defender in the squad will be Brett Kulak, at 26.

Teilor Stone has been a reporter on the news desk since 2013. Before that she wrote about young adolescence and family dynamics for Styles and was the legal affairs correspondent for the Metro desk. Before joining The Bobr Times, Teilor Stone worked as a staff writer at the Village Voice and a freelancer for Newsday, The Wall Street Journal, GQ and Mirabella. To get in touch, contact me through my teilor@nizhtimes.com 1-800-268-7116
Previous ArticleThe Canadian trades Max Domi to the Blue Jackets
Next ArticleA positive case in the Phoenix