The Canadian suffers another shutout and will face elimination 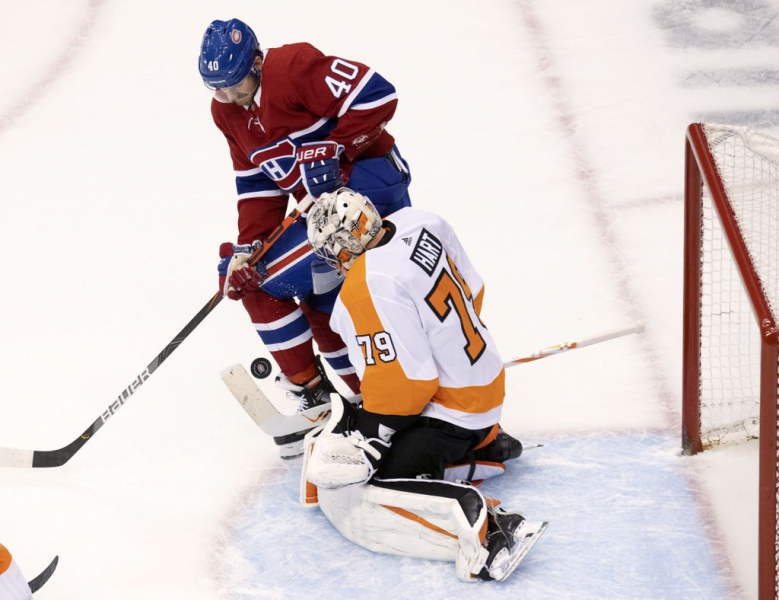 Carter Hart of the Flyers blocked all 29 shots he faced and has now shut out the Canadiens for just over 122 minutes.

Share August 18, 2020 5:49 pm Updated at 9:13 pm Share The Canadian suffers another shutout and will face elimination Michel Lamarche The Canadian Press It makes you wonder if the Montreal Canadiens' five-goal harvest on Friday against the Flyers of Philadelphia was, in fact, a mirage. Like the ones you can see in the distance on a road on a hot, sunny summer day.

For a second outing in a row, the Canadiens suffered a shutout loss, this time 2-0 in Game 4 of their Eastern Conference first-round series on Tuesday afternoon at Scotiabank Arena in Toronto.

After being beaten up in Game 2, Carter Hart and the Flyers lead the series with three wins to one.

Hart blocked all 29 shots he faced and has now shut out the Canadiens for just over 122 minutes, from Joel Armia's goal late in the second period last Friday.

The Habs' last goal came from Jesperi Kotkaniemi against Brian Elliott, midway through the third period on Friday.

“We knew during the last two meetings that we were going to face a team that closed the game and who are very comfortable playing a low scoring game. We have to be comfortable with that same attitude, ”noted the Canadiens' interim head coach Kirk Muller.

“In the last game we hit a few posts. Today was another close game, but there were a few moments early in the game where we didn't have any momentum. We wanted to generate more speed in the neutral zone and shoot more often at the net, and that's why I tried different combinations to see if there was chemistry among different players. ”

Michael Raffl, in the first period, and Philippe Myers, late in the second, beat Carey Price, who faced 22 pucks.

The Flyers will have the opportunity to eliminate the Canadian on Wednesday night.

“This game is over and we're going to wake up tomorrow and get ready to find a way to win a hockey game tomorrow night. We have good professionals here, they are proud and I expect to see them ready to play and have a real good fight tomorrow, ”said Muller.

Changes on both sides

Both Muller and his rival Alain Vigneault had made changes to their training. While James van Riemsdyk and Nicolas Aubé-Kubel were inactive on the Flyers side, Muller played in his lines by bringing, in particular, Phillip Danault to the center of Tomas Tatar and Brendan Gallagher.

The initiative almost paid off in the first minute of play when Tatar gave a nice pass to Danault, in the enclave, except that the shot by the Canadiens' center missed the goal.

The Habs had another real scoring chance with about six minutes left on the throw-off when Paul Byron tried to take advantage of a Jeff Petry throw return to push the disc into a wide open net. However, defenseman Ivan Provorov intervened with his stick and deflected the puck over Hart's net.

Between those two streaks, the Flyers exploited their best chance to score. After a turnaround at the Canadiens' blue line, Sean Couturier left the puck behind to Raffl, who beat Price high on the shield, with a quality wrist shot at 6:32.

The Canadian played better in the second period, especially during the first half of the field. He was given a first power play in the game when Scott Laughton knocked out Artturi Lehkonen after a face-off in the Canadiens' territory with nine minutes left. The Habs did not generate anything.

Some four minutes after that power play ended, the Canadian found himself in a two-goal deficit when an apparently harmless shot from Myers hit the inside of Price's stick before slipping under the keeper's arm. du Tricolore and end up in the net.

“This is the stroke of luck we would have needed, but you have to create your strokes of luck,” Muller said.

“(Carey Price) has been strong so far, but you have to score goals to win hockey games. It is a difficult goal to concede. But like I said, you have to create these lucky breaks yourself. ”

It was the first time since the start of the series that the Flyers had given themselves a two-goal lead, and the hill proved too steep for the Canadian to climb despite a dozen shots in the third period.

Brendan Gallagher, on the fact that he spent several minutes on the bench in the third period:

“You play for a reason: your teammates. I have to find a way. Every time you go out on the ice you have to take advantage of it. If the coach believes other players will do the job better than you do, that is his job. That doesn't mean I'm going to sit down and accept it. But my job is to play and when I get sent to the ice, it's to try to help. ”

Phillip Danault, on how to get back on his feet after the last two losses:

Shea Weber, when asked to explain what has changed for the Canadiens since the second game:

“If I could tell you, we would fix the problem and I think the results would be very different.”

Teilor Stone has been a reporter on the news desk since 2013. Before that she wrote about young adolescence and family dynamics for Styles and was the legal affairs correspondent for the Metro desk. Before joining The Bobr Times, Teilor Stone worked as a staff writer at the Village Voice and a freelancer for Newsday, The Wall Street Journal, GQ and Mirabella. To get in touch, contact me through my teilor@nizhtimes.com 1-800-268-7116
Previous ArticleThe Canadian will have to restart his attack to support Price
Next ArticleThe Canadian avoids elimination